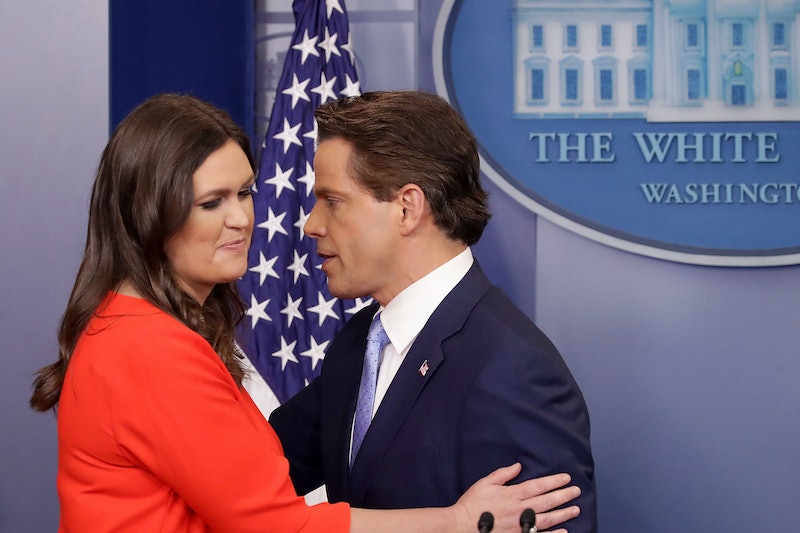 In a Sunday interview with CNN's Jake Tapper, newly hired White House Communications Director Anthony Scaramucci appeared to comment on Sarah Huckabee Sanders' appearance by suggesting that she keep using the hair and makeup person responsible for getting her ready for Friday's White House press briefing. (Scaramucci later clarified on Twitter, writing: "For the record, I was referring to my hair and make up and the fact that I like the make up artist. I need all the help I can get! #humor.")

The topic arose after Tapper asked if on-camera daily press briefings would be returning under Scaramucci's direction. Scaramucci began by opining that the cameras should make a return, then segued into praising Sanders' performance as press secretary while suggesting there is still room for improvement.

“I think Sarah does a great job. She's an incredibly warm person. She's incredibly authentic... For Sarah Huckabee, I want to do everything I can to make her better at that podium. I think she’s phenomenal there now. But like every athlete that is training for the Olympics, every day we have to make ourselves incrementally better,” he said. “The only thing I ask Sarah — Sarah, if you’re watching, I loved the hair and makeup person we had on Friday, so I’d like to continue to use the hair and makeup person.”

Prior to the Friday Scaramucci referenced, Sanders typically wore minimal, barely noticeable makeup, with her hair straightened. On the day in question, Sanders looked notably different, with her hair curled and a her face more heavily done up with bronzer, eyeliner, mascara, and eye shadow. Given the change in her appearance and the fact that Scaramucci was specifically talking about Sanders' professional performance and possible improvements she might make, it seems unlikely that the person Scaramucci was referring to was himself.

In an email to the Washington Post, Sanders appeared to not take offense to the comments, insisting that Scaramucci was merely praising the makeup artist's skills. “Nothing else should be read into it,” she wrote.

After weeks of assuming the responsibility of giving press briefings as press secretary, a task formerly carried out by Sean Spicer, Sanders was promoted to White House press secretary after Spicer's unexpected resignation on Friday. Whether Sanders will be giving more on-camera press briefings is in the president's hands, Scaramucci said during his interview with Tapper.