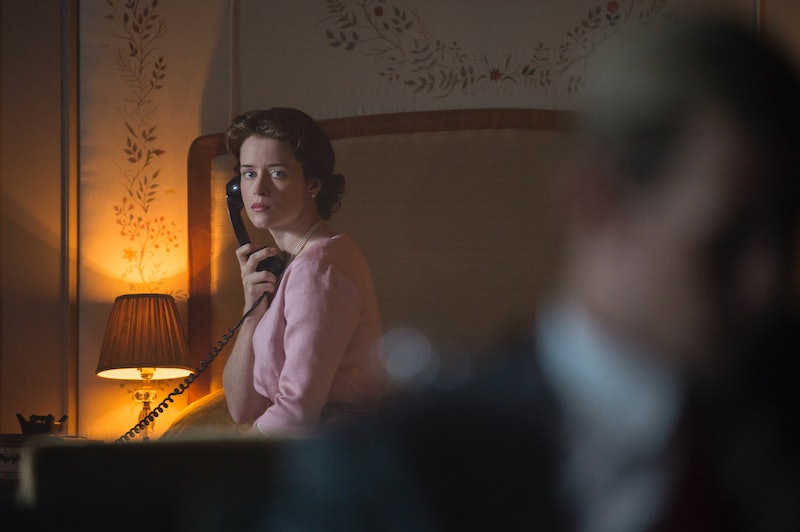 The Crown returns in Season 2 to continue the story of Queen Elizabeth II's continued adjustment to the role of monarch at a point in history that was changing rapidly. An interesting bit of drama this time around is Baron Altrincham's criticism of Queen Elizabeth II on The Crown. This new character causes quite a stir indeed. Played by John Heffernan, the Baron throws some major shade and is instrumental to the origin of the Queen's televised Christmas Message on the Netflix series — but did all of that really happen?

In August 1957, John Grigg, also known as Lord Altrincham, published a scathing public criticism in his own National and English Review of Queen Elizabeth II — specifically her public persona. "The personality conveyed by the utterances which are put into her mouth is that of a priggish schoolgirl," Grigg apparently said, according to the Oxford Dictionary Of Modern Quotations, "captain of the hockey team, a prefect, and a recent candidate for confirmation." The dictionary also notes that these remarks spurred protests (mainly because he dared say anything negative about the monarchy) and that Grigg got slapped in front of television cameras — which The Crown naturally does not hesitate to portray. (A New York Times article from 1957 reports that the crown subject cried "take that!" when he slapped Grigg.)

According to The Queen & Us: The Second Elizabethan Age by Nigel Nicholson, Grigg also criticized the "tweedy aristocrats" that made up her entourage, the conservative values that still existed in court, how the way she speaks makes her sound "like a pain in the neck."

These personal attacks on her character and presentation seem quite gendered if not downright sexist. Sure, the Rock & Roll '50s were happening outside her door, and Nicholson argues that his attacks are against the court and how they are choosing to portray the monarch through speeches, you wouldn't criticize a male leader by calling him the captain of anything. This type of "bossy" or "prim" criticism is all too reminiscent of the type of attacks thrown at female leaders who are not considered relatable or approachable enough even today, in 2017.

That said, according to The Guardian, the Queen responded to this criticism with several reforms around court — like informal lunches with her subjects (normal but interesting and accomplished people) and in 1958 ending the practice of having debutantes formally "come out" into society. That used to be a big deal in royal society, much more serious than Rory at cotillion on Gilmore Girls.

The Crown, as a television series dramatizing these events, uses the holiday season for a more direct response. Was Altrincham responsible for the 1957 Royal Christmas Message, the Queen's first to be broadcast on television? That's unclear, however, if you watch the original speech, it does appear as if she is trying extra hard to appear relatable and less aloof. Note the family photos, as well, that make both her and her court seem inviting.

The Christmas Message itself started with King George V in 1932, according to the official website of the Royal Household, and Elizabeth had already been making radio broadcasts in the first few years of her reign. This wasn't a new idea — just the fact that for the first time, the country and Commonwealth could see her face and inside her home as she spoke.

The Crown portrays Altrincham as a type of hero — which, in a way, he could be. It's always important that people in positions of great power face and respond to constructive criticism and that they be in touch with the people they are sworn to either protect or represent. That said, at a time when women leaders are still few and far between, the gendered nature of this particular attack is disheartening to relive. It was maybe necessary for progress but unfortunate that Elizabeth had to endure the brunt of criticism over institutions that she in no way created.

More like this
Julie Andrews Revealed A Surprising Behind-The-Scenes 'Bridgerton' Detail
By Grace Wehniainen
Who Is 'Umbrella Academy' Star Elliot Page Dating After His Divorce?
By Jake Viswanath
Regé-Jean Page Spoke Out On His Rumoured 'Bridgerton' Return
By El Hunt and Maxine Harrison
Dan Levy’s Father’s Day Pic Of Dad Eugene Spoofs The ‘Schitt’s Creek’ Vet’s Past
By Grace Wehniainen
Get Even More From Bustle — Sign Up For The Newsletter