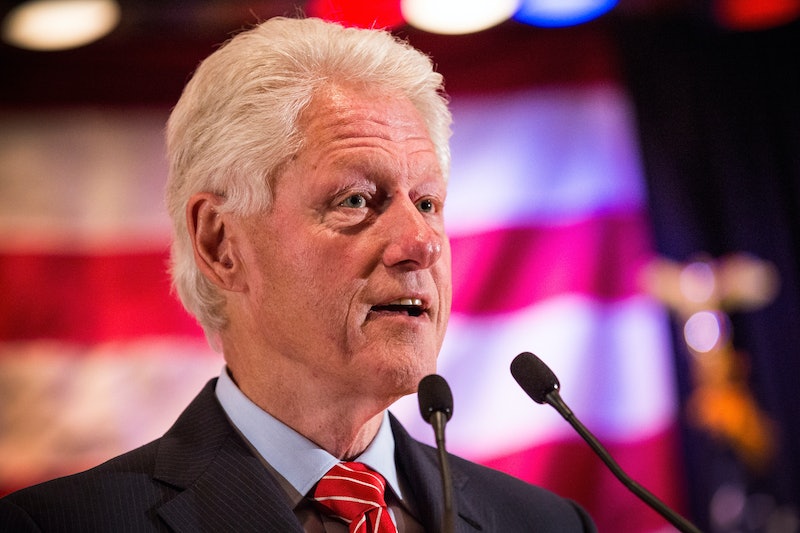 As the federal government shutdown continues to linger due to a border wall funding stalemate, President Trump has suggested that he may declare a national emergency in order to build his wall. In reflecting on Trump's suggestion, you may be curious whether other presidents, like Bill Clinton, ever declared a national emergency. As it turns out, invoking emergency powers isn't that uncommon during a presidency, though doing so to secure border wall funding is pretty controversial, CNN noted.

During his presidency, which spanned from January 1993 through January 2001, Clinton declared a national emergency 17 times, the Washington Post reported. As the Washington Post described, many of these emergencies declared sanctions on various foreign entities as a condemnation of their actions. For example, in 1997 Clinton declared a national emergency entitled, "Blocking Sudanese Government Property and Prohibiting Transactions with Sudan." The related executive order cited Sudanese "human rights violations" and "support for international terrorism" as the reasons for America's emergency declaration.

Clinton's national emergencies that didn't involve sanctions still related mostly to foreign policy, the Washington Post noted. In 1996, the 42nd president issued a declaration restricting vessel movement near Cuba after the Cuban military destroyed two unarmed American civilian aircraft. In 1994, Clinton declared a national emergency intended to curb the "proliferation of nuclear, biological and chemical weapons and the means of delivering them," as noted in Executive Order 12938.

... Trump's [potential] executive order would be focused on a theoretical national security situation on the U.S. border — most others (but not all) states of emergency have responded to humanitarian and political threats abroad: for governmental human rights abuses, terrorism, regional destabilization or recruitment of child soldiers.

As Vox reported, Trump's potential emergency declaration is also somewhat different because of the controversy it has engendered about whether it constitutes an appropriate and legal use of emergency powers. The outlet noted that some legal scholars argue that declaring an emergency to ensure that the wall is constructed is not legally allowable. However, other experts believe that this potential declaration falls within the president's powers, Vox noted. Either way, if Trump did declare a national emergency regarding the border wall, the outlet indicated that he would likely receive significant pushback from Congress, the U.S. court system, or both.

For now, Trump seems to be backing down from moving forward with declaring a national emergency. As The Guardian reported on Jan. 11, Trump issued this message during a roundtable discussion at the White House. “We want Congress to do its job," Trump asserted. “What we’re not looking to do right now is national emergency.” The paper also noted that Trump indicated that he has a right to declare an emergency, but stated that "I’m not going to do it so fast."

Overall, as Trump weighs the prospect of declaring a border-wall-related national emergency, looking back at other presidents' use of emergency powers helps offer context when evaluating his actions. Indeed, many Americans will be closely watching to see how Trump continues to approach the border wall funding issue, particularly as the shutdown continues to linger into mid-January.