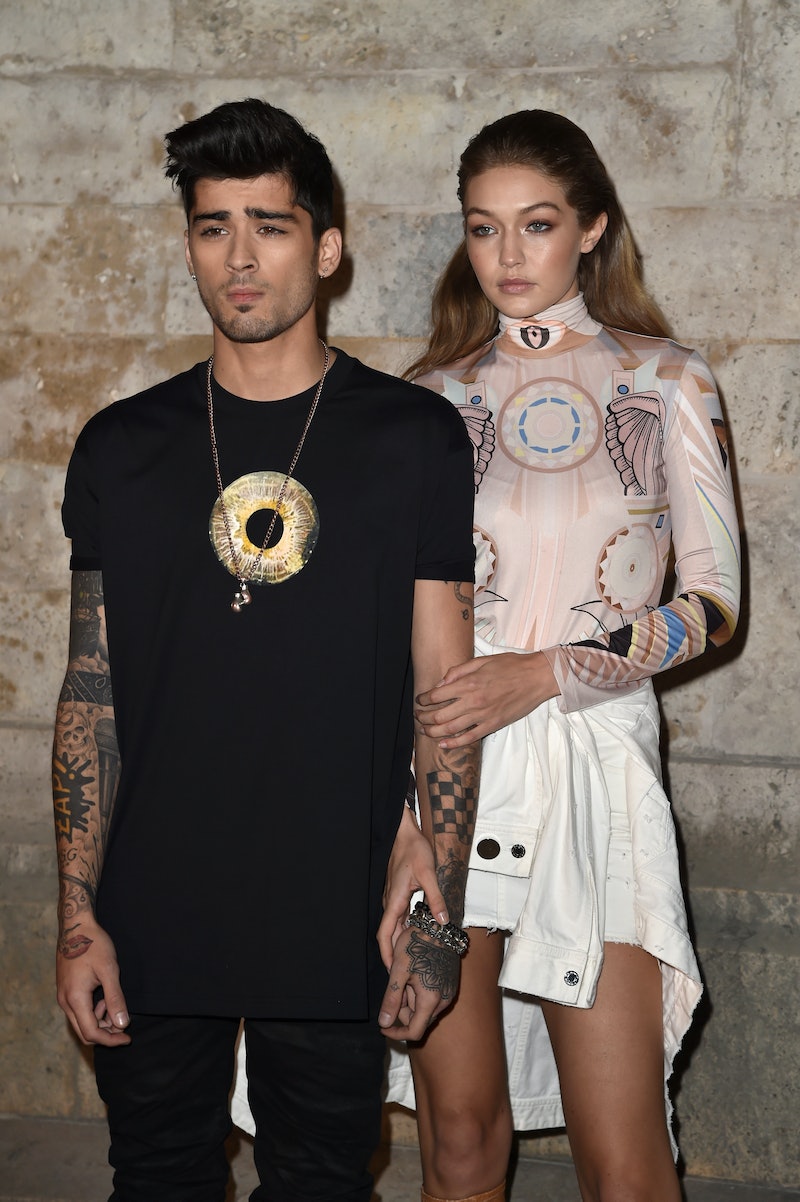 Another Hollywood couple is apparently heading to Splitsville. According to Us Weekly, Gigi Hadid and Zayn Malik reportedly broke up. This news comes after much speculation about the couple's relationship status, which included some sources reporting that Zigi may have taken a break from one another back in November. (Bustle reached out to reps for Hadid and Malik for comment, but did not receive an immediate response.)

While the relationship may be over, that doesn't necessarily mean there won't be a reconciliation in the future. “They’re done,” a source claimed to Us Weekly, “They could get back together, but it’s over for now.” Another source told the publication that Hadid "tried hard to make it work,” but that Malik has "a lot of his own issues that she couldn’t help him get through.”

As previously mentioned, this news comes after it was widely speculated that the couple had parted ways in late 2018. According to E! News' report on Jan. 2, Hadid and Malik "have been spending apart since early November," per a source. They went on to reveal that the couple's busy schedules may have partly led to the split. The supermodel and the singer "both been really focused on themselves and their separate careers," the source told E! News.

Even before that, people wondered if Hadid and Malik had parted ways, which stemmed from the fact that neither has posted about each other on their respective social media pages in quite some time. As for the former One Direction singer, he has not posted any photos at all of his potential ex on Instagram. But, as Cosmopolitan noted, he did post a photo of her mother, Yolanda Hadid, back in September.

The last time that Hadid posted about Malik came in October. She posted a selfie of the couple during happier times and captioned the snap with, "flyin home to my happy place." So, it did sound as though things were going well between the pair as of October 2018.

In addition to their social media accounts, another noticeable move added to the split speculation. As Page Six noted, it's been quite some time since Hadid and Malik were spotted together publicly. In early December, the "Pillowtalk" singer held a release party for his latest album, Icarus Falls. However, Hadid did not appear at the affair.

Additionally, the publication noted that Hadid also had a major event that her significant other did not attend. In early November, the supermodel walked in the Victoria's Secret Fashion Show and went to the show's subsequent after-party. But, Malik was not spotted with her at either event, again per Page Six.

Hadid and Malik have been in an on-again, off-again relationship since late 2015/early 2016. They previously parted ways in March 2018, with both of them confirming the breakup by releasing statements on social media. At the time, the model wrote on Twitter, in part, "I’m forever grateful for the love, time, and life lessons that Z and I shared." Shortly after they release those statements, TMZ reported that the couple was spotted kissing in April 2018, which seemingly confirmed that they were back on.

Alas, it seems like Hadid and Malik have since parted ways again. But, until they specifically address the split themselves, Zigi shippers will just have to wait and see whether their favorite couple has officially broken up.