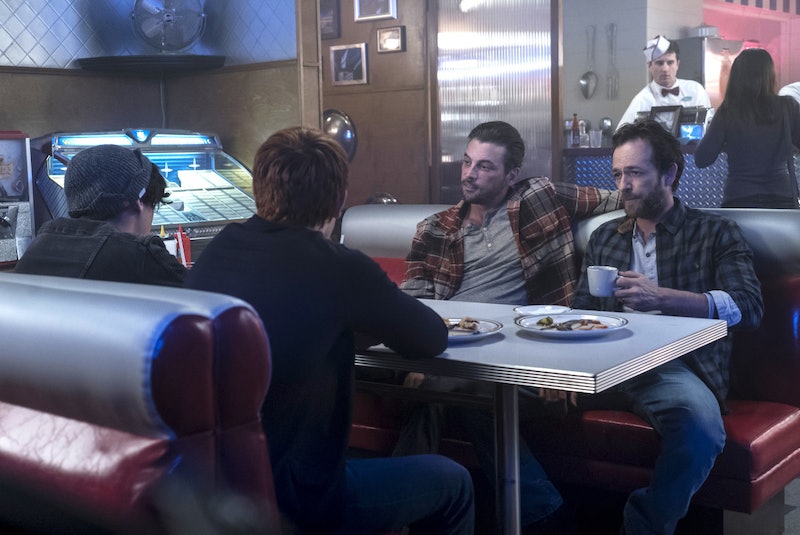 I'm really gonna need to get working on my Riverdale murder board. There are too many connections between the adults and the teens in this town to keep track of, and the evidence surrounding Jason Blossum's death is mounting. Now, the reveal at the end of Thursday's episode has me wondering if Jughead's dad killed Jason on Riverdale — why else would he have Jason's letterman jacket?

Sure, that cliffhanger might be trying to pin the crime on Jughead himself, who was questioned by the cops during the episode. Jughead definitely had more access to Jason's personal items, as a classmate. Sure, the letterman jacket was not on Jason at the time of his murder. As far as we know, all he had with him was the all-white garb that matched Cheryl.

However, I'm more interested in his dad's history of odd jobs. FP said that, in order to provide for his family, he took some work that was not exactly on the level. Could one of those jobs have been killer for hire? He is the leader of the Southside Serpents, after all.

It also seems likely that someone close to Betty and Jughead is either the killer, or connected to the murder in some way. Who discovered Polly and Jason's getaway car after them, and burned it down? FP's interest in Betty did seem feigned, and it could have served a nefarious purpose — either as a way to establish an alibi, or to get more information about his son's accomplice.

Drama between parents on teen shows has never been my favorite thing. I'm already disappointed that Hermione Lodge's relationship with Fred Andrews seems to be mirroring the Lily and Rufus plotline from Gossip Girl. However, Jason's death gives added meaning and stakes to feud between the Blossums and the Coopers as well as the history between FP Jones and Fred. Jughead's dad might be more than just a curmudgeon whose son doesn't He could be the killer we're looking for on Riverdale.