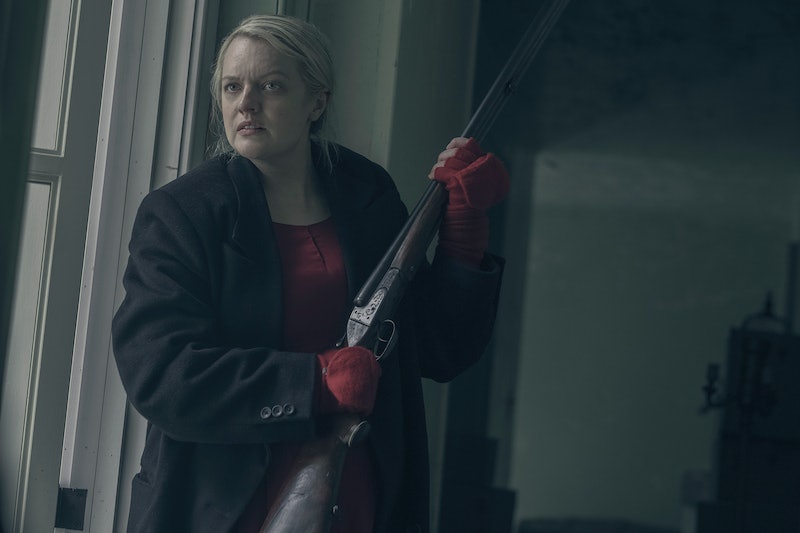 After finding herself abandoned and alone, stranded at a deserted house, a woman whose life has been dictated by the people around her finally has an opportunity to take matters into her own hands. Spoilers ahead for Season 2 Episode 11 of The Handmaid's Tale. On this week's episode of The Handmaid's Tale, June tries to escape yet again, but this time with the added discomfort of being incredibly pregnant and potentially putting her baby at risk.

Discomfort is something any Handmaid's Tale viewer is accustomed to (or at least tries to tolerate) at this point, but this week, June's situation made for more genuine worry than sheer horror. As she roams the wintry property where she's stranded, looking for a way to finally escape Gilead, June tries to lift heavy doors, runs through snow, and crashes a car into a garage door, all while nine months pregnant. It's hard not to wince every time she stumbles or falls or her body is jolted, especially given the complications she already experienced earlier in her pregnancy. Any move could be the wrong one.

Of course, the fact that physically straining herself is putting the baby in harm's way probably isn't lost on June. She's made it clear that her baby's safety is her top priority, but what kind of safety would she put first: a healthy birth, or the chance to grow up outside Gilead? It probably would have been healthier for her baby if June had given herself up to Fred and Serena as soon as they got to the house. But when the choices are damning your child to the clutches of evil, or hoping they hold on as you give escape one last shot, you have to try.

It's also worth noting that any danger June does inevitably place her child in isn't really her doing at all — the world she's been forced into lends itself to violence by nature, and all she can do is try to make the best out of the unbelievable circumstances.

Eventually, June does go into labor — and it's unclear whether it's brought on by the strain she's put on her body by desperately trying to escape, or if it was simply going to happen at this time anyway. It's definitely not a great sign that June's water breaks as soon as she takes a hard fall while she's shoveling out the garage door. She knows her shot at escaping is over, and the turn of events is as bittersweet as it gets. Had June been brought to this reunion with Hannah just a month or so earlier and the same sequence of events had happened, she might have had the time, ability, and strength to leave with the working car she found in the long-forgotten garage.

But the silver lining is that June is afforded brief but precious alone time with her baby girl — whom she names "Holly" after her mother — after miraculously giving birth alone by a fireplace. Had she given birth under the eye of the Waterfords, June would have had the support of other handmaids, Aunt Lydia, and presumably a doctor, but then Holly probably would have been taken from her immediately and handed to Serena. The time June spends cuddling Holly uninterrupted is a tiny blessing that handmaids are rarely — if ever — granted.

And in the end, June makes a gut-wrenching choice that isn't necessarily in her best interest, but it is in the best interest of Holly. Before giving birth, June heads outside and fires a gun a few times into the air, hopefully alerting surrounding commanders or guards to her position. After some time, they come to retrieve her.

June promised Holly long before she was born that she wouldn't allow her to grow up in Gilead — that she'd provide a better life than this twisted society. But by making this difficult choice, June proved that more than anything, she wants Holly to be safe and healthy, even if it condemns them both to more time in Gilead.