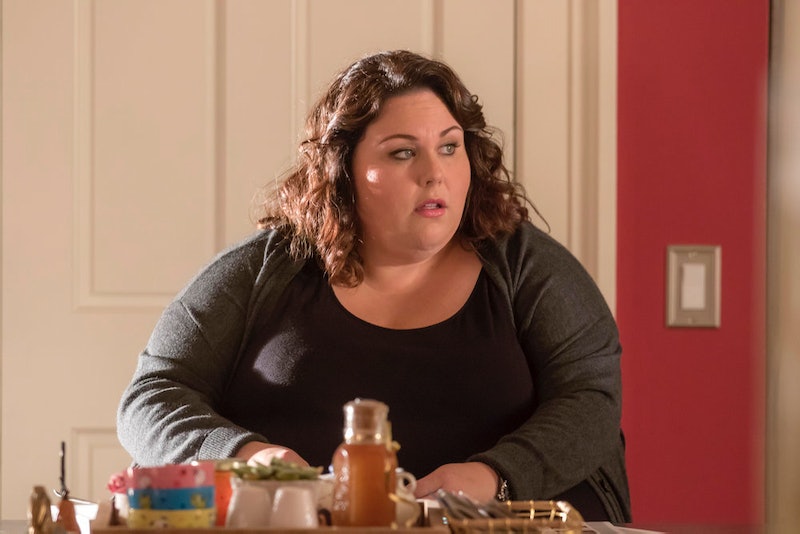 Fans learned in Season 1 of This Is Us that Kate blames herself for her father Jack's death. So, with the Season 2 premiere appearing to infer that Jack dies in a fire, it's leading fans to wonder whether Kate set the house fire on This Is Us. Now, let's be real. There's just no way the fire was Kate's fault out of any direct action. She's not an arsonist. She deals with any pain or frustration she has in a very internal way — it would make no sense for her to burn her house down on purpose.

But, that doesn't mean the fire wasn't indirectly her fault. There's a reason every girl always double checks to make sure she didn't leave her straightener on before she leaves the house. A stray hot hair tool, a lit candle left unattended — there are so many ways to accidentally start a house fire. Maybe she was the initial cause of the flame and her father — drunk or asleep or something — couldn't get out in time. But, leaving a hair tool on or a candle lit also seems pretty low drama for a show like This Is Us. Perhaps Jack actually died saving Kate — or, saving her dog that appeared out of nowhere in the post-fire flashback.

The scene right after Rebecca is shown driving with Jack's personal effects on the passenger seat, we see Kate and Randall being comforted at Miguel's house, and Kate is holding on pretty tightly to her pet dog while crying. Did Jack run back into the burning house to save the family pet? It's a very him thing to do. Perhaps that's why Kate feels responsible, because it was her dog. Or maybe Kate herself was trapped in the house and her father died trying to save her. Although, you'd have to think he kids would also be at the hospital if they'd been in the fire. Smoke inhalation is no joke.

Twitter was alight (sorry, terrible pun) with theories following the episode, and one user brought up another interesting point. Kevin was not with the other two kids during this disaster, so perhaps he had snuck out that night — with Kate, ever his closest sibling — covering for him. Then, when the fire broke out, Jack stayed behind to save broken-legged Kevin. Only, he couldn't find him, because he wasn't there.

Jack would never have left that house without all three of his children, and could have died in the fire believing his son was still inside. The flaw in this theory though is that it would really be more of Kevin's fault than Kate's.

One thing to note is that Rebecca is wearing her Steelers jersey when she drives up to her burnt home. Did Jack die on game day? It would make sense, then, that Kate watches the game alone every Sunday with her father's ashes — she's reliving his final day, in a way.

In any case, if it was the fire that killed Jack, there's pretty much no way Kate intentionally started it. Now, if it happened accidentally or something else related to her and the fire caused her dad's death, that's another story. But, whatever it was, she really shouldn't blame herself. Accidents happen, and Jack wouldn't want his daughter to carry this guilt around. Hopefully in Season 2 she can come to piece with what happened and let some of that shame go. Nobody deserves to feel responsible for their parent's death, especially when it was probably all just one big, terrible, tragic accident.