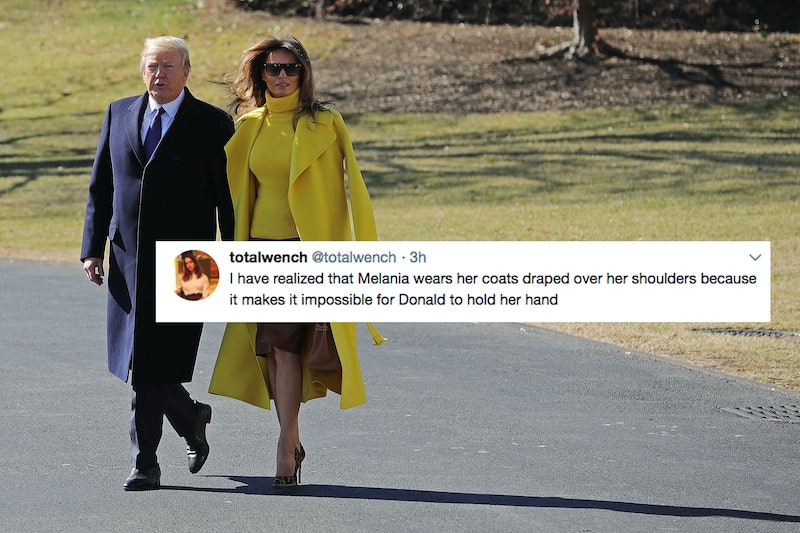 As the president and first lady departed the White House to head to Ohio on Monday afternoon, there was yet another handholding debacle. As they walked toward the plane, President Trump reached his hand toward Melania, and they awkwardly stopped in their tracks for a moment. Is this another instance of the first lady refusing a public display of affection from the president? Twitter definitely thinks so.

In a video of the couple, Trump seems to reach his left hand toward Melania's right hand. Then he stops walking as she continues, creating an awkward little shuffle where he then puts his hand on her arm before he walks behind her and over to her other side. He raises his arms in a shrug, and they continue to the plane without touching, until he puts his hand on her back as she nears the plane.

A simple moment of confusion, or a clear sign of relationship turmoil? Perhaps it was just her coat that got in the way — or does she purposely wear her coat without her arms in the sleeve so she can't hold hands with her husband? Twitter's got theories, as it generally does with any step the Trump family takes.

It doesn't seem like there's total evidence of a clear swat here, as there was when the president and first lady arrived in Israel last year. At that time, Trump reached out for Melania's hand and received a full get-away-from-me slap in return. This instance was much more awkward and a little more of an avoidance, so people are trying to read into what exactly it means.

Here are some of the theories.

This Is Why She Wears Her Coat That Way

It Makes It Impossible

This Is About Stormy Daniels

He Was Actually Trying To Show His Good Side

She's Just A Prop For Him

The Purse Is Strategic As Well

She's Well Practiced At This

It's Definitely The Ego

Nah, It Was A Clear Rejection

This latest instance just adds to a list of times Melania has seemed to swat or just fully avoid having to hold Trump's hand in public. Other than the swat heard round the world in Israel, there have been subtler moments, like when he reached for her hand as she walked down the stairs of Air Force One and she immediately reached up to fix her hair instead.

What exactly happened this time is a little unclearer since it seemed to have mostly happened under her coat, but rest assured Twitter thinks it lines up with the way Melania has reacted in the past.