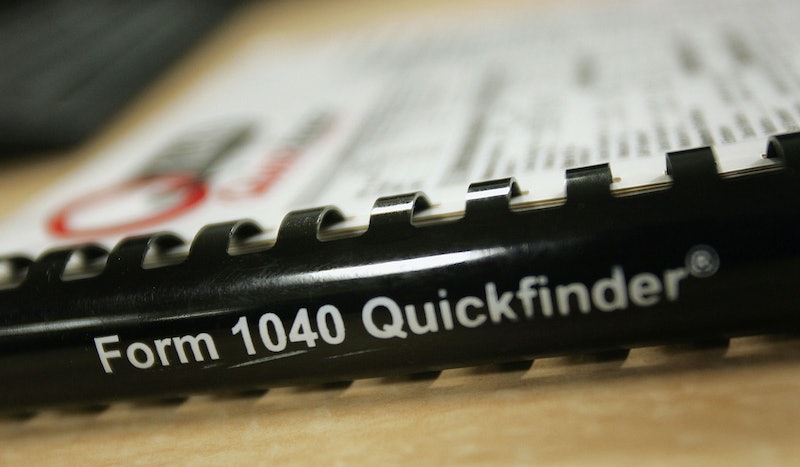 With Tax Day less than two months away, many people might be wondering how their tax rates have been affected by the GOP's new tax law. As you file your taxes this year, you might notice that your tax bracket has changed. That's because last March, the IRS published a new set of tax brackets and tax rates to reflect changes implemented by the Tax Jobs and Cuts Act of 2017.

2018 was the first tax year under this new GOP-sponsored tax law, and with it came some important changes. According to Forbes, the IRS regularly tweaks tax brackets to account for inflation, in a process known as indexing. So for example, if the inflation rate is two percent during a certain year, Forbes notes that the IRS will adjust all income tax brackets by approximately two percent as well — but only approximately, because the IRS appears to prefer rounding up to increments of $25, $50, or $100.

From the tables above, it is clear that this is a significant change. It's true that tax rates generally seem lower across the board in 2018 than they were in 2017, but this is especially true for people with higher incomes; note that the top tax rate fell from 39.6 percent to 37 percent. Keep in mind, though, that most of these tax rates are marginal, which means that you'll be paying a fixed tax rate for income above a particular threshold. For example, if you made $35,000 in 2018, you will pay a 10 percent tax rate on the first $9,525 you made, and then a 12 percent tax rate on the rest.

When you are filing your taxes this year, make sure to take a close look at the tables for 2018 to see if your tax bracket has changed and what your new tax rate might be. It is also important not to confuse the 2018 brackets with those that the IRS just published for 2019; the IRS typically releases tax information for a given tax year toward the beginning of that year, so the 2019 tables will not be relevant until you file your taxes next year.

Although tax rates seemed to be lower in 2018, tax refunds also seem to be lower. The new tax law curbed many popular deductions, Vox reported, which meant that taxpayers had to recalculate how much money they had to withhold for tax purposes — and many of them under-withheld income.

There are a few other changes to keep in mind as you file your taxes this year. According to Forbes, the new tax law significantly changed standard deductions and exemptions. For example, the standard deduction for single filers nearly doubled to $12,000 in 2018, and increased to $24,000 for married couples filing jointly. There will also be no personal exemption amounts when you file your taxes for 2018, per Forbes.