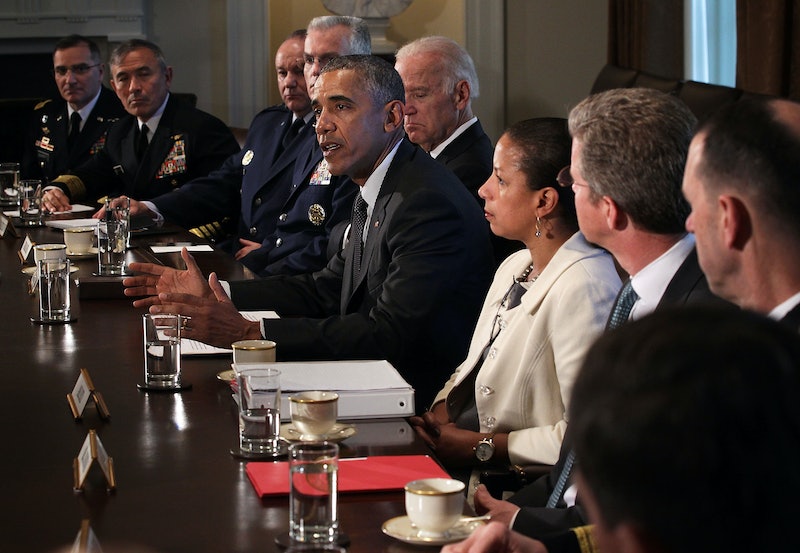 Non-disclosure agreements (NDAs) at the White House have been the topic of much conversation since former White House staffer Omarosa Manigault Newman made the claim that President Donald Trump has been requiring them of his staff there, which senior adviser Kellyanne Conway went on to confirm on Sunday. However, as with so many things that are the new normal in the Trump administration, this wasn't always the case. For instance, President Barack Obama did not require non-disclosure agreements from his staff — except in very certain cases, and with certain limitations.

According Robert Passman, a federal employment attorney who spoke with The Daily Beast, any NDAs pertaining to White House staff would have to be approved by the Office of Personnel Management, and they would be unlikely to approve that because federal employees' speech is protected on First Amendment grounds. And on Twitter, former Obama Associate White House Counsel Ian Bassin confirmed the Obama White House did not consider it within their capability to require NDAs of their employees. Bustle reached out to Obama's office for comment.

"Occasionally an official would ask us in the Obama White House Counsel’s Office if they could make their staff sign NDAs," Bassin wrote. "We’d tell them no and explain that beyond classified material and federal ethics standards on confidential info, WH staff work for the public."

In one example of the Obama White House's approach to NDAs, employees of the Office of Management and Budget could be required to sign some sort of NDA in order to gain their security clearance, but the guidelines on the Obama White House's webpage made it very clear that this NDA did not get in the way of the employee's ability to share information with, for example, "communications to Congress" or "whistleblower" activity if the employee noted any serious violation that needed reporting.

Joanna Friedman, another federal employment attorney, also told The Daily Beast that Presidents Obama and Bill Clinton did make their employees sign an agreement barring them from lobbying their former colleagues after leaving the White House — but that's a very different thing than an NDA.

In an interview on ABC's This Week, Conway claimed that it was normal for White House employees to sign NDAs. However, this is not actually the case. Well before the news broke that Trump was indeed requiring NDAs, both The Daily Beast and The Washington Post wrote that it wasn't legally possible for a president to do so. According to Fortune, even besides the First Amendment, there are numerous other statutes that keep White House staff communications public when confidentiality isn't an issue — the Freedom of Information Act, for example, or the Presidential Records Act, which makes all White House communications public within 12 years after a president has left office.

After it became public information that Trump had required White House employees to sign binding NDAs that would last even after Trump's presidency ends, The Washington Post wrote that Trump was the first president to do this. According to Debra Katz, a lawyer who spoke to The Washington Post on the subject, demanding an NDA that includes a financial penalty — as Trump's is reported to have — is "an outrageous effort to limit and chill speech."

"Once again, this president believes employees owe him a personal duty of loyalty, when their duty of loyalty is to the institution," Katz told The Washington Post.

As Politico reported, Obama also didn't like leaks coming from the White House. However, he didn't use Trump's businessman's tactic of requiring NDAs in order to stop them.