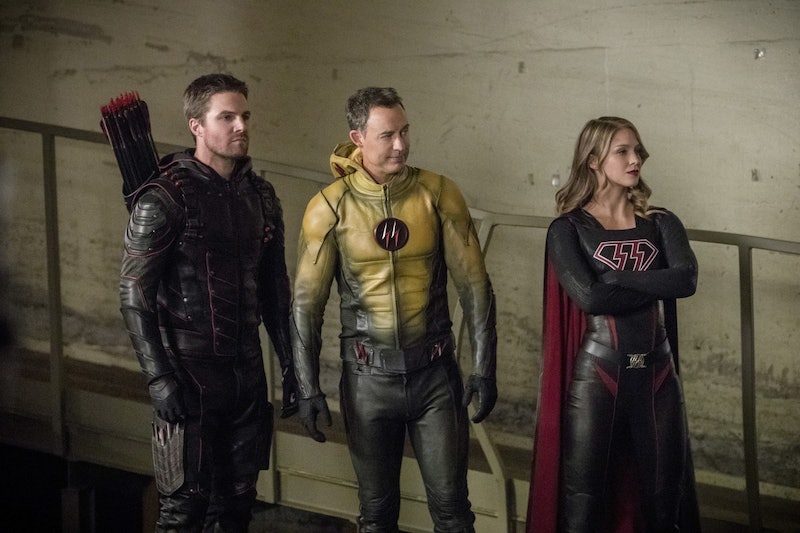 "His wife? Gross," says the real Supergirl, scrunching up her face out of disgust when she sees her evil alter-ego making googly eyes at the evil version of Green Arrow. And that's exactly the reaction some fans had as well watching Part 2 of the CW superhero crossover when it was revealed that Overgirl and Dark Arrow from Earth-X were married. Meanwhile, Kara and Oliver haven't even had many positive personal interactions. The whole weird exchange and the kiss that came before it present a very weird twist to the characters audiences know so well. But is the Arrow-Verse playing with superhero canon here? Do Supergirl and Green Arrow ever date in DC comics?

Earlier this year during an appearance at a Heroes & Villains FanFest, Arrow stars Amell and David Ramsey dropped a hint that there could be something romantic brewing between Oliver and Kara. The actors participated in a game of "Two Truths and A Lie," according to the convention's official site, and both Amell and Ramsey said that Oliver and Kara would share a passionate kiss in one of the crossover episodes. They did, of course, in addition to exchanging plenty of romantic looks, gestures and comments. Additionally, at the same panel, Amell mentioned that he would like for his character to do more scenes with Supergirl in the future.

But despite Amell's hopes for more of a friendship between the heroes, as well as the kiss that occurred between Dark Arrow and Overgirl, Olicity shippers can rest easy. The comics versions of Kara and Oliver have never dated, according to the DC Database. And that means that unless the shows intend on going completely against their source material, a romantic relationship between these two heroes is never, ever going to happen. Although, this hasn't stopped some fans from shipping them anyway, even going so far as to create fan fiction dedicated to the idea of Kara and Oliver hooking up.

In 2016 at Entertainment Weekly's PopFest Amell talked about his character’s dynamic with the Girl of Steel, which was decidedly prickly in the first four-show crossover event. He noted, “Oliver is bit standoffish with Supergirl, which probably means that he’s smitten.” This comment was probably made in jest, but suggests that it's possible that Oliver has a thing for Kara... if you believe in the whole "he's cold, because he cares," fifth grade way of thinking.

In the comics, Kara has little time for romance and little luck balancing love with her superhero responsibilities. Though, she developed a relationship with Captain Boomerang and dated Power Boy briefly before discovering that he was an abuser. Additionally, she had a brief relationship with Henry Flyte, an ordinary human. Much like Kara, Oliver also has his fair share of failed relationships in the comics, with the most prominent being the one with his long-time love interest Black Canary. Meanwhile, their TV selves aren't exactly single and free. Oliver wants to marry Felicity, and Kara is dealing with the fallout of Mon-El's news.

While it's clear that the relationship between Kara and Oliver will stay strictly on Earth-X in the crossover, one can't help but wonder if things would eventually get taken to the next level on either of their shows if circumstances were a lot different. Something blossoming between the characters isn't exactly that farfetched, being that Oliver traditionally tends to be attracted to dangerous types of women. Previously he dated a superhero vigilante who fought crime using martial arts and an international eco-terrorist. And Kara tends to be into hero-types.

Weirdly, Dark Arrow and Overgirl are actually proof that Green Arrow and Supergirl wouldn't make that bad of a couple. But most fans will probably be happy to see things go back to normal for Oliver and Kara once the Earth-X threat is put down.