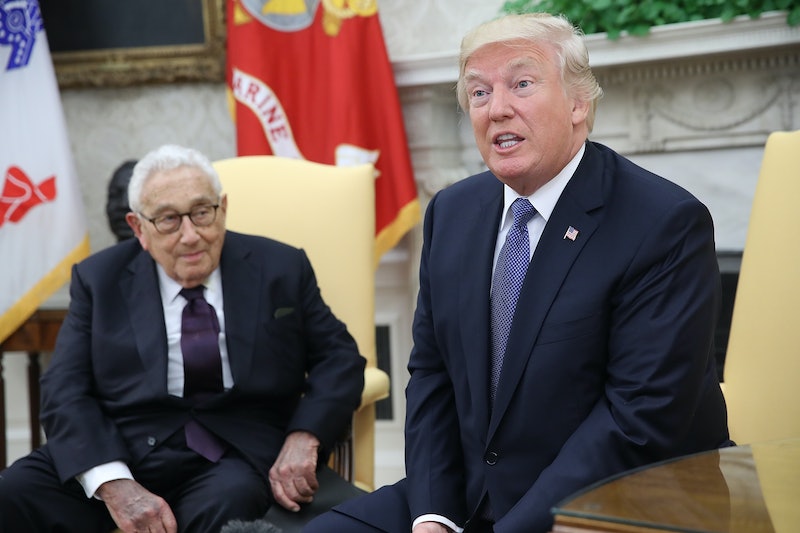 The current president of the United States and a man who served as national security adviser and secretary of state nearly 30 years ago just had a get together in the Oval Office, and it's grabbed its fair share of headlines. President Donald Trump sat down with Henry Kissinger for a meeting, with a slew of foreign policy decisions looming on the horizon. And yet, Trump also made a bizarre comment to the press that had nothing to do with foreign policy ― if Donald Trump even gets how Medicare works, suffice to say, he sure didn't show it on Tuesday afternoon.

Trump betrayed an apparent lack of understanding about how America's guarantee health insurance system for seniors operates, as demonstrated by remarks he made about the Republican Party's health care proposals, and how they'd positively affect Kissinger's health insurance situation. Speaking to reporters about the GOP efforts to repeal the Affordable Care Act, Trump said the following.

Now, as any of you who're either over 65 years of age ― or those of you who have friends, family, and loved ones who are ― may have noticed something a little bit strange. Trump is using the specter of Henry Kissinger having to pay increased insurance premiums as a means to rail against the Affordable Care Act, and promote the GOP's alternative bills, all of which would have stripped health insurance from millions of Americans.

But this assumes that Kissinger is purchasing his health insurance on the Obamacare exchanges, and there's something a little odd about that assumption. Namely, the man is 94 years old, which means he's been eligible for Medicare for 29 years.

The upshot is that Kissinger doesn't need to pay for health insurance at all, beyond what he pays into the system in taxes. In fairness to him, this is probably considerable amount, given that he's a multimillionaire many times over. On the other hand, he can therefore definitely afford it.

During his presidential campaign, Trump repeatedly promised not to cut Medicare or Medicaid, but his subsequent comments since becoming president have suggested either that he wasn't being honest, or that he's unaware of what the programs are or how they function. Throughout the GOP's months-long health care legislative push, the president repeatedly made false claims about the contents of the various bills and proposals, insisting (among other things) that people with preexisting conditions would be protected.

Kissinger, for his part, only smiled and stayed silent during Trump's health care reference to him. It's worth noting that he is not a non-controversial figure in his own right, and his appearance in the Oval Office drew a lot of scrutiny. Internationally, Kissinger is widely viewed as a war criminal for his role in interfering with the Paris peace talks during the Vietnam war in 1968, the massively deadly carpet bombing of Cambodia in 1969, and the CIA-backed coup in Chile in 1973.

It's a safe bet that health care wasn't what Kissinger and Trump were mainly discussing. The aging diplomat's visit came with a host of sensitive foreign policy decisions awaiting Trump, including increasing tensions with North Korea, and the ultimate fate of the Iran nuclear deal. On the latter point, Trump has recently indicated his preference to scuttle the deal, undoing literally years of hard-fought U.S. diplomacy.