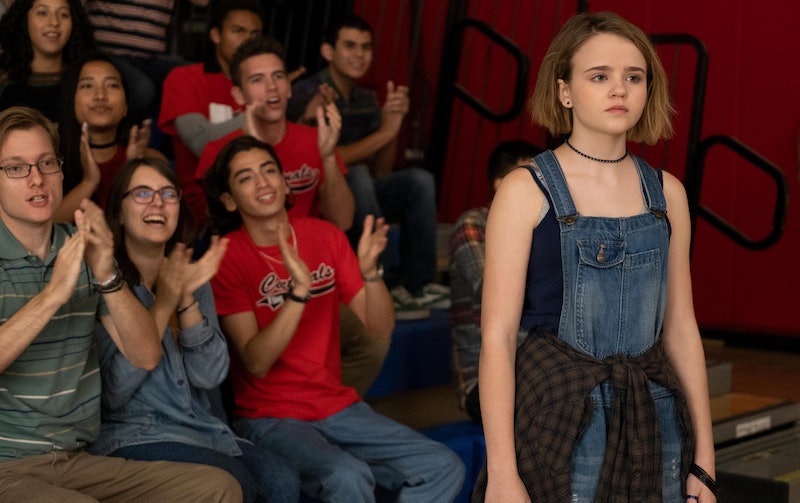 Spoilers ahead for Little Fires Everywhere Episodes 1-3. Now that Celeste Ng's beloved 2017 novel has been adapted into a Hulu miniseries, it's only natural to compare the two against each other. And while the show is incredibly faithful to its source material, there are a few key differences between the Little Fires Everywhere show and book.

That's because Ng was fairly involved in the adaptation process, serving as an Executive Producer and even appearing in one of the episodes. The Hulu series, which premieres Wednesday, March 18, follows an uptight mother of four named Elena Richardson (Reese Witherspoon), who rents out her duplex to a bohemian artist named Mia Warren (Kerry Washington) and her teenage daughter, Pearl (Lexi Underwood).

Both the book and series are set in Shaker Heights — a supposedly utopian neighborhood in Ohio where the author grew up. "I read all the scripts and gave them notes on Shaker Heights, like 'no one in Shaker Heights would have that name,'" Ng told Bustle. "I was sort of like a tuning fork for [the writers] so they could ask, 'Are we harmonizing in the right way?' And frankly, they were."

In addition to the setting, both versions of Little Fires take place in the '90s. All of the characters have the same names, and the Richardsons have the same number of kids. However, there are a few differences.

For one thing, Izzy's (Megan Stott) orchestra concert, in which the youngest Richardson writes "NOT YOUR PUPPET" on her forehead in a demonstration against her domineering mother, was much different in the book. In Ng's novel, this was a throwaway anecdote and involved Izzy protesting a dance recital as an 11-year-old. Once onstage, Ng wrote in Chapter 4, the girl "stood stock-still while the others, disconcerted, danced around her." Here, Izzy is both much older and a talented violinist. The effect, however, is the same.

How fitting that Reese Witherspoon production would include a book club, since she herself runs a popular book club. Although this scene wasn't in the novel, in which they discuss the then-controversial play The Vagina Monologues, Ng told the L.A. Times that "it felt totally new and also really familiar." The author, who plays one of the book club attendees, continued, saying, "It was this weird feeling of, 'I've never seen this with my eyes before,' and yet they're the characters I imagined."

This new scene allows Mia and Elena to bond and talk about the concept of motherhood.

"I knew that I wanted to look at race, but I knew that there was going to be this Asian American baby, and I felt like making [Mia] an Asian American woman, which was a perspective I knew I could write, would be a little too neat," Ng told the L.A. Times. "Like, of course the Asian woman will side with the Asian mother. But I didn't feel like I was the right person to write a black woman's experience. I didn't want to pretend like I knew what that was like. So, I thought of [Mia] as a white woman, but I didn't mark her racially."

In Hulu's series, Mia and her daughter Pearl are black, which Ng said she was pleased to see, since she'd wanted to make her protagonist a woman of color to begin with.

Although Elena's youngest is certainly the black sheep of the family, the Hulu series adds another layer to her struggles to fit in. In the show, Izzy had a falling out with her former best friend, and audiences later learn that she had feelings for her. This, of course, further complicates her relationship with her perfect, cookie-cutter family, and makes Mia's free-spirited nature that much more appealing.

But while there were a few narrative changes to the series, Ng didn't feel possessive of the adaptation, telling the L.A. Times, "I wanted [the series] to have space to be its own thing." In that sense, mission accomplished.

More like this
Netflix Shut Down 'Bridgerton' S3 Rumours About A “Very Dark” Storyline
By Bustle
The Plane Crash In 'Dear Edward' Is Based On A 2010 Tragedy
By Grace Wehniainen
Everything To Know About The 'Daisy Jones & The Six' TV Series
By Maxine Harrison and Brad Witter
'The Last Of Us' Episode 4 Put Twitter Into An Emotional Spiral
By Alyssa Lapid
Get Even More From Bustle — Sign Up For The Newsletter
From hair trends to relationship advice, our daily newsletter has everything you need to sound like a person who’s on TikTok, even if you aren’t.