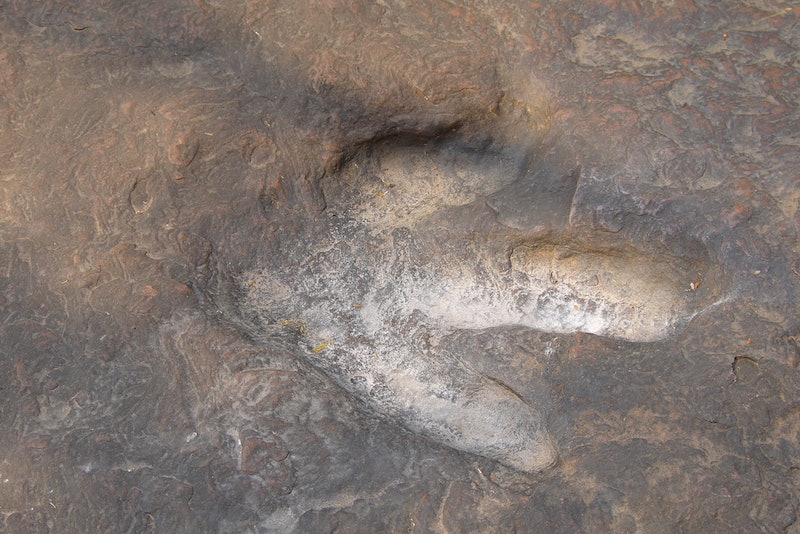 When it comes to the Jurassic period, a remote island of Scotland perhaps isn't the first place that springs to mind. However, dinosaur footprints have been discovered on the Isle of Skye, and researchers believe the stegosaurus, among other species, once roamed the Scottish landscape.

As the Guardian reports, the tracks were found by a team of palaeontologists from the University of Edinburgh, and were located in sedimentary rocks estimated to be around 170 million years old. The footprints are a few metres long and appear in single lines — a formation expected from an animal on all fours. However, more distinct elements of the prints confirm the tracks were left by Jurassic species.

Dr. Stephen Brusatte, Ph.D., from the University of Edinburgh said of the discovery: "Those proportions match up quite well to the hands and feet of stegosaurus skeletons," and continued, "these footprints are the first evidence we have that this very major, very iconic group of dinosaurs lived in Scotland." Brusatte also revealed that the footprints are around the size of a grapefruit or small teapot, and the dinosaur responsible would've been a similar size to a cow.

As the Metro reports, researchers analysed around 50 newly identified prints, which confirm that in addition to the stegosaurs, the Isle of Skye was also home to the gigantic, long-necked species known as sauropods, and the meat-eating theropods — a species related to the Tyrannosaurus rex.

The tracks were first uncovered back in 2017, after heavy storms occurred on the northeast coast of the island. Following the monumental discovery, the Isle of Skye is now recognised as one of the only places in the world where fossils from the middle Jurassic period can been found.

As reported by the Metro, the findings provide scientists with vital information surrounding the early evolution of major dinosaur groups, and Brusatte, who led the field team in charge of the study, explained how researchers now have a "much clearer picture of the dinosaurs that lived in Scotland 170 million years ago."

The study was supported with a grant from the National Geographic Society, and later published in the journal PLOS ONE. In addition to the University of Edinburgh, scientists from the University of Glasgow, the Federal University of Rio de Janeiro, National Museums Scotland, and the Staffin Dinosaur Museum, all contributed to the groundbreaking Jurassic discovery.