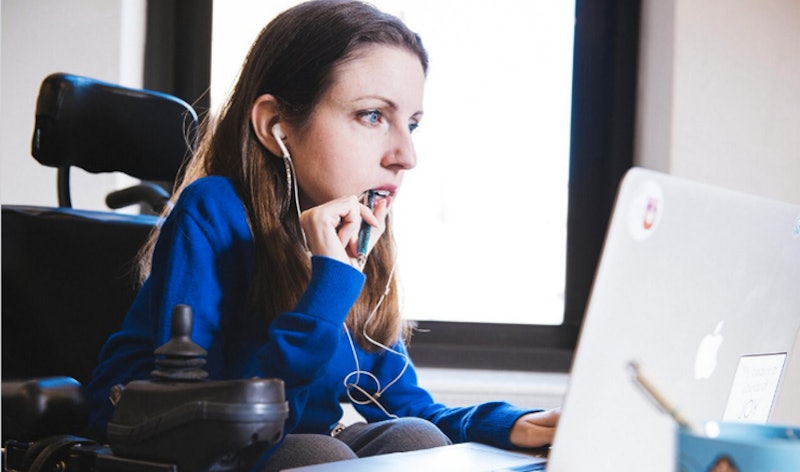 Tuesday marks Equal Pay Day in the United States — but something is still missing from the conversation. Yes, it's crucial that we highlight the too-many inequalities that face women. But it's just as important to ensure that these conversations reflect the experiences of all women, including women with disabilities.

Of course, it's not just disabled women who suffer the effects of the wage gap. Last year, women on average were paid just 80.5 cents for every dollar men made, an alarming disparity of nearly 20 cents, according to the U.S. Census Bureau. But women who are also members of other marginalized communities, like women of color and LGBTQ women, face a more significant wage gap.

Providing equal pay to women would cut the poverty rate for women in half.

Ostensibly, the goal of these programs is to prepare people with disabilities for integrated employment where they will earn a typical wage. Unfortunately, this is almost never the case.

Poverty is even more prevalent in the disability community. Nearly 27 percent of people with disabilities live below the federal poverty level, reports the U.S. Census Bureau. Notably, providing equal pay to women would cut the poverty rate for women in half, says the Institute for Women’s Policy Research.

Why does all of this this matter so much on Equal Pay Day? Because women have higher rates of disability. One in four women in the United States have a disability, according to the Centers for Disease Control and Prevention (CDC), outnumbering men. And, according to the United Nations: “Girls and women of all ages with any form of disability are generally among the more vulnerable and marginalized of society."

Equal Pay Day efforts must be inclusive of disabled women.

First, it is imperative that laws protecting employees with disabilities be enforced. Unfortunately, the Trump administration has already rolled back protections for people with disabilities. In December, the U.S. Department of Justice (DOJ) eliminated Obama-era policies that required states to reduce sheltered workshops and promote meaningful, integrated employment opportunities for people with disabilities. And the DOJ, the federal agency responsible for enforcing the ADA and other civil rights laws, has cut back on the number of civil rights cases it's pursuing, according to VICE.

Finally, and most importantly, Equal Pay Day efforts must be inclusive of disabled women. For far too long, conversations concerning women’s rights, such as the #MeToo movement, have excluded women with disabilities. Even the Women’s March was slow to include disability rights as one of its issues—and only did so after significant advocacy by disabled women.

Disability rights are women’s rights. It's time we recognized that.

More like this
Meet The Spice Company Founder Who Sees Chai As A Metaphor
By Madhuri Sathish-Van Atta
Michigan’s Governor Is “Going To Fight Like Hell” To Protect Abortion Access
By Andrea Zelinski
36 Influential AAPI Voices On Pride, Power & Progress
By Faith Xue
How The City Healed Five Years On From The Manchester Arena Attack
By Ella Glover
Get Even More From Bustle — Sign Up For The Newsletter