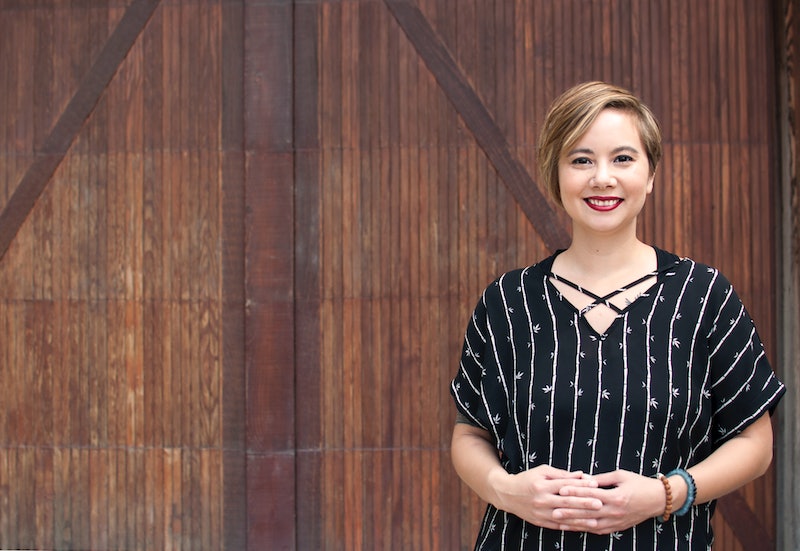 If there’s one thing I thought was 100 percent true about me, it was that I was straight. So when I started questioning whether I was bisexual in my early 30s, things started to get confusing, fast. I thought everyone knew what their sexuality was by the time they were an adult, so it completely freaked me out that I was questioning my own sexuality at what I considered to be such a late stage in my life. But what I found is that discovering you’re queer after 30 is a pretty common experience.

“Identity is a journey,” educator and activist Robyn Ochs tells Bustle. “There’s a lot of cultural pressure to be certain about everything … The idea that somehow uncertainty or changing your identity is a problem or a weakness; I believe it’s a strength. It takes strength to be open to new information.”

As a cisgender woman, my identity journey started in a rural farming community in the Midwest. There was no LGBTQ community where I grew up. Two boys in my high school were bullied because they were suspected of being gay, and if there were any other LGBTQ kids at my school, they stayed well hidden, which I don't imagine was by choice. The community was so conservative that we sang Christian hymns at my choir concerts, even though I went to public school. People crossed to the other side of the street when they saw my Japanese mom. Needless to say, I didn't grow up in a community that handled diversity all that well.

I didn’t think twice about my sexuality as I entered adulthood. I'd dated men all through college, and then started a long-term relationship with a man when I was in my mid-20s. Looking back, my boyfriend and I did spend a lot of time talking about my attraction to women, but I didn't take it seriously. My favorite game to play with him was to point out the woman we each found the most attractive in a room when we went out together. But I kept talking myself into believing I was straight, so at that time, it was all just fun and games.

Ochs says that’s a pretty common experience. “Heteronormativity is a powerful force,” Ochs tells Bustle. “We’re raised in a culture where unless ... we grow up in an LGBTQ family, the presumption is that we’re straight. And there’s so much cultural reinforcement of that narrative.”

That’s why it was so confusing for me when, at around 30-something years old, I started to develop an attraction to my bisexual genderqueer friend. The more time I spent with them, the more I felt like they were a person I could be with. Like, in a relationship sense. I kept catching myself thinking, “If they weren’t married…” And the more I realized those feelings were real, the more anxious and scared and confused I became. Because I was already in my 30s, and I was supposed to be straight, and I couldn’t figure out what the heck was happening to me.

Though popular culture would have you believe otherwise, people don't just "turn gay." The attraction I was feeling for someone of a different sex had been there all along; it just took meeting someone who sparked that attraction for me to realize it. And looking back at all those "mini-attractions" I'd been having for women all my life, I started to realize that my sexuality has never been clear-cut heterosexual. It just took me until I was a little older to figure that out.

“I do believe that you can go through your life and then suddenly meet some specific person to whom you are attracted — and it may so happen that their gender is outside your usual attraction — and it’s not like you suddenly become bisexual. It may be finding that individual person … you’re specifically attracted to,” Ochs tells Bustle.

Michelle Paquette, a 65-year-old transgender woman, thought she was only attracted to women until she was in her 60s. In fact, after she transitioned in 2016, Paquette considered herself a lesbian. But then she met a transgender man at a support group. “He had a lovely red-orange beard and this kind of reddish hair on his legs,” Paquette tells Bustle. “There’s something soft in his appearance and manner which kind of was appealing to me. And I had to stop and think, ‘What's going on here?’ I felt an attraction towards this person."

What Paquette realized, she says, is that her attraction to people isn’t isolated to what’s under their clothing. She says she’s attracted to a person’s overall appearance, mannerisms, speech, and behaviors. But, Paquette tells Bustle, it took her some time to work through those feelings to understand what attraction truly means to her.

“Sometimes when people ask me to describe [my sexuality], I'm a little flippant, and I say, 'Well, I identify as a lesbian with a 30 percent chance of queer',” says Paquette.

Paquette says anyone who’s on their own identity journey should take their time and be gentle with themselves. They should also respect all the thoughts and feelings they’re having, says Paquette. “Just being honest with yourself, thinking about it a little bit, and being open to thoughts and impulses that might make you a little uncomfortable with yourself.”

Like Paquette, I had to work through my feelings to try to understand what attraction means to me. Ochs says that often leads one to play the "20/20 hindsight game" where you look for clues in your past that maybe your attraction wasn't what you thought it was, and, sure enough, I found my own clues I'd missed along the way.

Today, I'm pretty comfortable calling myself bisexual, but the journey to get there has been rife with anxiety, depression, and fear. I'm honestly really embarrassed to even admit this, but when I first started having these feelings, I didn't want to be queer. I'm already biracial; I couldn't imagine adding queer to that label.

But I'm quite fortunate to have an extremely strong support system to help me through the harder days. When I couldn't take the anxiety and depression anymore, I finally talked to my mom about it. My mom knows what it's like to be oppressed, marginalized, and hated. And she basically told me that, no matter what happens, she's got my back. I couldn't have asked for a better family to get me through such a confusing experience.

If you're trying to work through your own identity, you don't have to face it alone. There are lots of resources out there, such as Biwomen Boston, the Bisexual Resource Center, GLAAD, PFLAG, and the Human Rights Campaign. Identity is a journey, and uncertainty may be a part of the process.

More like this
The 19 Best Tweets & Memes About Bisexual Awareness Week
By Lexi Inks
Why A Libra & Capricorn Couple Will Have A Difficult DTR Conversation
By Kristine Fellizar
Are Quality Time & Gift-Receiving Love Languages Compatible?
By Lexi Inks
The Differences Between Polyamory & Open Relationships
By Lexi Inks
Get Even More From Bustle — Sign Up For The Newsletter