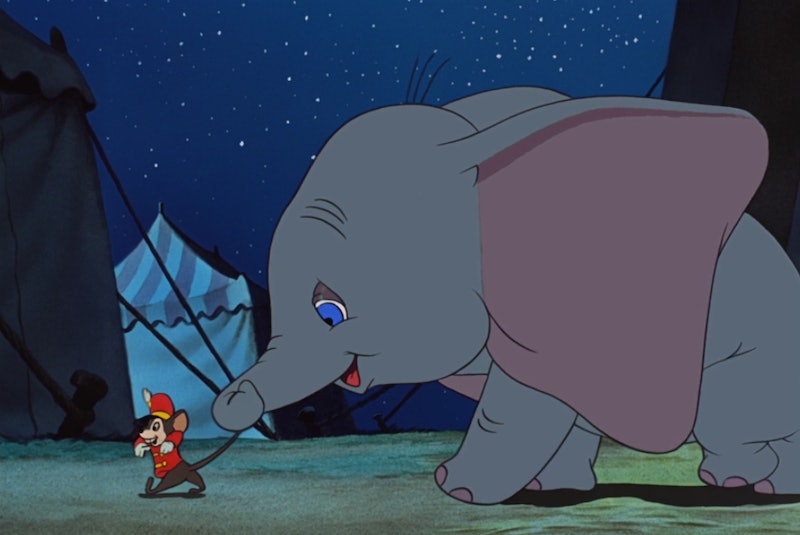 Click through Disney's new streaming service, which launched on Tuesday, Nov. 12, and you'll notice that the descriptions for some of their animated movies have changed. Disney+ has added disclaimers to some classic Disney movies, warning of "outdated cultural depictions." For many fans, this acknowledgment of the problematic aspects of their older movies is an important step forward for Disney, but others think they could go further.

The disclaimer is in the "details" section of certain animated films. At the end of the synopsis for classics like Dumbo, The Aristocrats, Jungle Book, and Lady and the Tramp, it states, "This program is presented as originally created. It may contain outdated cultural depictions." Other disclaimers include warnings of "tobacco depictions."

This new messaging from Disney offers context to those older movies that might perpetuate racist stereotypes — like 1955's Davy Crockett: King of the Wild Frontier and 1960's The Sign of Zorro — without censoring their own films. Back in April, it was reported that Disney planned to remove problematic moments from their films like the Jim Crow scene in Dumbo. And while that certainly would have been a way for Disney to acknowledge its past problematic content, it also would have erased part of its own history.

Disney is not the first studio to add disclaimers to its older material. Warner Bros. put a warning before some of its classic cartoons stating that they were "products of their time. They may depict some of the ethnic and racial prejudices that were commonplace in American society. These depictions were wrong then and are wrong today." The main different between Disney and Warner Bros.'s disclaimers is that, while the Warner Bros. language clearly states that these offensive depictions were wrong when they were made, Disney's does not.

Some on Twitter felt the Warner Bros. disclaimer sends a much stronger message to the audience than Disney's. "The Warner Brothers one is better, more complete, and harder to ignore," Twitter user @MandlDA wrote of the warnings. But, the user admitted, the disclaimer was a step in the right direction.

In fact, many fans on Twitter were happy to see the disclaimer instead of edits to the films themselves. "Props to you Disney for not censoring your own movies," a fan named @BrigidHuntress tweeted, "and giving out this disclaimer. THIS IS HOW IT SHOULD BE DONE!"

Not all of Disney's controversial titles are available on Disney+ — the highly controversial 1946 film Song of the South is nowhere to be found — but, by choosing disclaimers over edits, Disney is creating an opportunity to engage with the larger conversation about their problematic history without ignoring it.