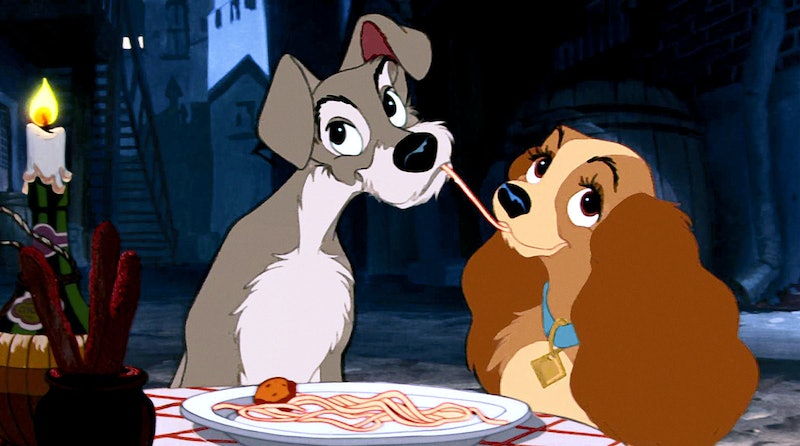 On Monday March 19, The Hollywood Reporter revealed that Disney is making a live-action remake of Lady and The Tramp — and it sounds like it's going to be paw-some. While the film's release date has yet to be announced, you won't be able to catch it in theaters. The remake will debut on Disney's digital streaming service — which is set to launch in 2019 — and, in addition to being live-action, will also include computer-generated imagery (CG), according to The Hollywood Reporter.

While there aren't a whole lot of details about how special effects will play a part, I'm guessing the new film will end up being kind of similar to the live-action, Glenn Close-starring remake of 101 Dalmations. It's probably safe to assume that the CG part will come in handy for scenes like the candlelit spaghetti dinner — because even the best-trained dogs may need some assistance to slowly share a single noodle that ends up in a kiss. I mean, could any of us humans even exercise that kind of patience?

The remake will be directed by Charlie Bean, a long-time animator who worked on Cartoon Network's Dexter's Laboratory and Samurai Jack. Most recently though, he made his directorial film debut with 2017's The LEGO Ninjago Movie.

At first glance, Bean may seem like kind of an odd choice for Lady & The Tramp — The LEGO Ninjago Movie was an action-packed, computer animated film about crime-fighting toys with an expertise in martial arts. At the heart of the movie, however, was a touching story about family: the main Good Guy, Lloyd (AKA the Green Ninja), discovers that the man Bad Guy, Garmadon, is actually his absentee father.

While Lloyd and the rest of his secret ninja crew try to take Garmadon down, Lloyd also struggles with his desire to rebuild his relationship with his deadbeat dad. The whole thing was unexpectedly emotional, but showed that Bean is definitely qualified to deliver the kinds of sentimental scenes we all know and loved in Lady and The Tramp.

Speaking of which, according to Mental Floss, Moviefone, and Yahoo!, the famously-romantic spaghetti-kiss scene almost got nixed from the original film entirely. Steve Vagnini, a former studio archivist and a curator for the official Disney fan club D23, told Yahoo! Movies in 2015 that, "Walt [Disney] wasn’t convinced that that would be a very clean-cut scene,” he said. “As you can imagine, if you have two pets and they eat a plate of spaghetti, it’s hard to envision that being too graceful.“

The new live-action film is being produced by Brigham Taylor, who worked on the live-action remake of The Jungle Book. That movie, like the new Lady and the Tramp, also used a live-action/CG hybrid, and received overwhelming praise for the techniques by Variety.

"[The] animal effects are overwhelmingly successful," Andrew Barker wrote in his review for Variety. "It isn’t just that the animal movements scan as real ... but they’ve figured out just how much to anthropomorphize the animal mouth movements to make their speaking seem natural, without turning them into cartoons."

With talents like Bean and Taylor on board, Lady and The Tramp already seems destined for greatness. The film will be one of many live-action Disney remakes coming out over the next few years — Mulan, Aladdin, The Lion King, and Dumbo are set to be released in 2019 alone. Disney has also confirmed that they're working on remakes of The Little Mermaid, Snow White, Pinocchio, and The Sword and The Stone as well, but release dates for those films have yet to be announced.

Until more details about the Lady and The Tramp remake are revealed, fans can start fantasizing about their dream voice-cast list. And I, for one, will definitely be eating spaghetti tonight.