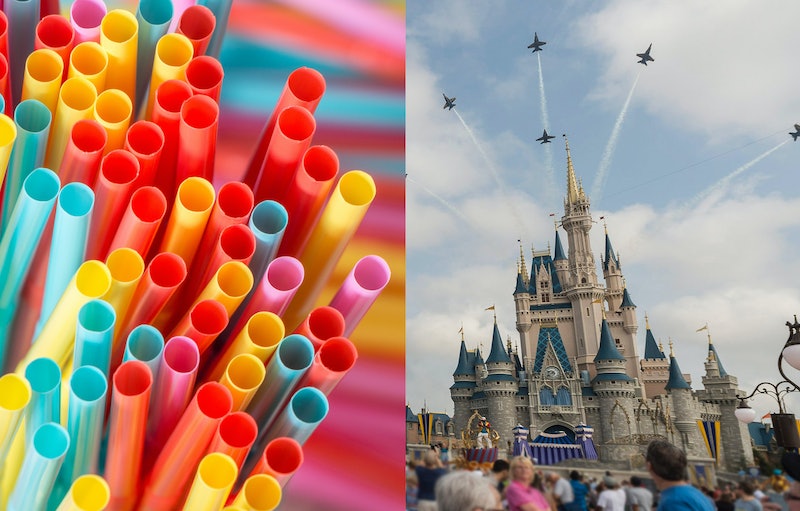 It's official: Disney is the latest in a string of major companies to announce its plans to phase out plastic straws and other single-use plastic items from nearly all of its locations. In a post on the Disney Parks Blog, the company stated that it expects to entirely eliminate single-use straws and stirrers "at all [Disney] owned and operated locations across the globe" by mid-2019, and that it will also be taking steps to reduce other types of common single-use plastics currently available at its locations. Disney Tokyo will not be affected by the ban, as that park is owned and operated by The Oriental Land Co., according to USA Today.

Other single-use plastics targeted for phase-out include: in-room amenities, which Disney says it will be ditching in favor of refillable amenities; plastic bags in parks and on cruises (though Disney did clarify that plastic bags will still be available upon request "at a nominal price"); and polystyrene cups. "These steps are part of our long-term effort to reduce single-use plastics, and we will continue recycling and responsibly disposing single-use waste that cannot be eliminated," Disney wrote in the statement. Per the statement, these moves will "[amount] to a reduction of more than 175 million straws and 13 million stirrers annually," and will reduce plastic used in Disney hotels and cruises by 80 percent.

As Morgan Sung writing for Mashable noted, Disney's original statement did not include a mention of a plastic straw replacement for disabled visitors. In a statement to Bustle, Stephanie Christine Corzett, Disney's director of external communications and media relations, says that "meeting the needs of guests with disabilities is extremely important to us." Corzett added, "We are involved in discussions to identify and develop accessible, alternative options for those who need them. Alternative straw options will be provided as necessary for our guests unable to utilize paper straws." Corzett also noted that "Disney's Services for Guests with Disabilities team would be available before and during visits to 'accommodate guests with specific needs.'"

Blake wrote that though some companies are offering up paper or alternative-material straws as replacements to single-use plastic straws, paper straws are not usable for people with limited muscle control, and guests with disabilities should have access to plastic straws if they need them. "There's no doubt that Starbucks' intentions are pure, and seeing companies take steps to become more eco-friendly should always be applauded," Blake wrote. "But as a person with a disability, I can't help but hold back on the applause — just a little. These types of unilateral decisions simply don't take into account the needs of those who will be most impacted."

Some Twitter users are pointing out the potential impact of Disney's decision on disabled people, with a few noting that Disney recently announced a deal with Ziploc to sponsor Walt Disney World's Splash Mountain — a deal that includes giving guests resealable plastic Ziploc bags to protect phones and other sensitive items on Splash Mountain. Per WDW News Today, "A limited supply of the bags will be available daily on a first come, first serve basis. The bags will be themed and feature a Splash Mountain logo."

In the statement posted on the Disney Parks Blog, Bob Chapek, chairman of Disney Parks, Experiences, and Consumer Products, said, "Eliminating plastic straws and other plastic items are meaningful steps in our long-standing commitment to environmental stewardship. These new global efforts help reduce our environmental footprint, and advance our long-term sustainability goals."

Correction: This story has been updated from its original version to include a statement from Disney.