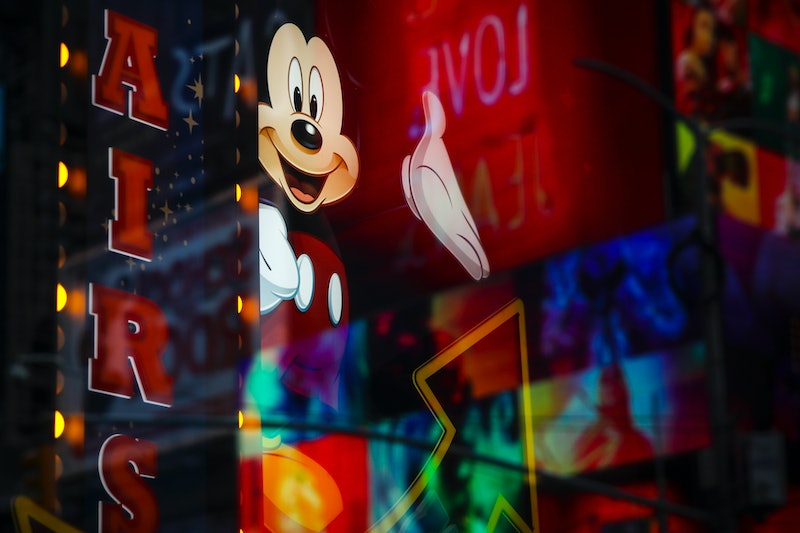 Somewhere over the rainbow, Disney dreams really do come true. That's right my friendlies, Disneyland Paris is hosting a Pride event June 1 to kick off Pride Month 2019, HuffPost reports, and everyone is invited. Dubbed "Magical Pride," Disney is inviting you to: "Dress like a dream, feel fabulous, and experience Walt Disney Studios Park like never before — loud, proud, and alive with all the colors of the rainbow," Disneyland Paris announced on its website. If you want to lock down your Disney Pride tickets ASAP, you can book your packages today, which will give you something bright and shiny to look forward to during the long, cold winter.

The event promises to deliver a Disney-worthy Pride Parade, a dope dance party with artists dropping "banging beats," and myriad magical surprises. While this event is new, Disney debuted its Rainbow Mickey Collection ahead of Pride Month in 2018, and it's been celebrating marriage equality at Cinderella's Castle since 2007. "We believe this change is consistent with Disney's long-standing policy of welcoming every guest in an inclusive environment," Disney Parks and Resorts spokesman Donn Walker is quoted as saying by CBS News about Disney weddings. "We want everyone who comes to celebrate a special occasion at Disney to feel welcome and respected." While Magical Pride has hosted past unofficial Pride events at the park, and other Disney parks have had unofficial Pride celebrations, NBC News reports, this year's will be the first official Pride celebration for any Disney park.

The addition of an official Pride event in one of the most exciting Disney Parks in the world is pretty boss. According to an Instagram post from the Magical Pride page, the park is partnering with the UK-based Daddy & Dad blog and Disney blogger The West Wing in order to make the event official-official. If you've always wanted to go to Paris, you're a Disney devotee, and you want to celebrate Pride at the happiest place on Earth, Magical Pride was made for you.

"Celebrating diversity at the place where dreams come true, Magical Pride warmly welcomes anyone and everyone to come and party, play and stay at Disneyland Paris," the Magical Pride website said. You can score a package that includes a two-day Disney Hopper Ticket and access to the special Pride party from 8 p.m. to 2 a.m. on June 1. Those who've attended unofficial events in the past said on the Magical Pride website that the experience was unforgettable. Now, Disneyland Paris is committed to making it official.

"Diversity and equality are strong values at Disneyland Paris, and each year, we host millions of visitors regardless of their origins, gender or sexual orientation," a spokesperson for The Walt Disney Company told NBC News. "We are committed to fostering a welcoming environment for all of our guests where magic is for everyone."

If you can't get away to the City of Lights in 2019, Disneyland in Anaheim, Calif., and Disney World in Orlando, Fla., both host unofficial Gay Days events. At Disney World, Disney Gay Days will take place Aug. 13-19. At Disneyland, Gay Days are scheduled for Oct. 4-6. Because these events are unofficial, you'll have to head to the organizers' websites to get all the deets. Whichever event you choose, come as you are to celebrate with those you love, both real and make believe.