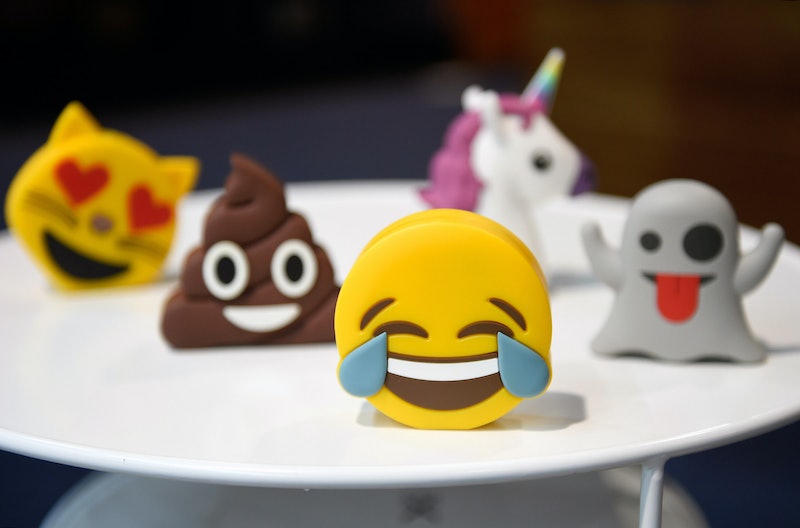 It wasn’t too long ago that the only kind of emojis we had were comprised of a colon and parentheses, or a “greater than” symbol and the number three. Now, illustrated emojis are a staple of modern day communication and social media. According to a 2015 report from Emogi, 92 percent of people on the internet use emojis regularly. Though we use emojis all the time, most of us probably don’t think they have much of an impact beyond helping us express what emotions we feel in the moment (or creatively communicate what we're paying our friend back for on Venmo). However, a new study has found that the inclusion of diverse emojis helps to promote representation and personal expression on social media.

The research, conducted by scientists at the University of Edinburgh in the U.K., examined a sample of over one billion tweets to determine the ways in which people use emojis with darker skin tones. In 2015, Apple released their different emoji options that featured emojis with darker skin tones, and with different color hair. While some people were afraid at the time that emojis with dark skin tones would be used “inappropriately” to incite racism, or antagonize people of color, the study found that hasn’t been the case: In fact, researchers discovered most people simply use the emoji that best represents their own skin tone. And, when people did tweet out using an emoji with a different skin tone than their own, the post was positive the majority of the time. Though many of us may react to this news with a simple slightly smiling face, it's helpful to have this information to explain to people who might question the need for more emojis representing all people; they are useful, according to science.

Moreover, the study found that close to half of users used a lighter skin tone that matched their own, and that the darkest emoji skin tones available were still the least likely to be used in all regions of the world. Interestingly, the study revealed that people of color on Twitter were most likely to modify their emojis to match their skin color. According to the press release, this was a significant finding for the scientists because it highlights the importance of people being able to express themselves and their identities online.

"The introduction of skin tone choices for emojis has been a success in representing diversity, and their extensive use shows that they meet a real demand from users,” Dr. Walid Magdy, an assistant professor at the University of Edinburgh's School of Informatics, and the study’s lead researcher, said in the press release.

In addition to encouraging diversity in regards to race, emojis representing gay couples were added with the iOS 6 update back in 2012, and same-sex parents were added in 2015. Moreover, earlier this year, Apple proposed thirteen new emojis to represent people from the disability community to Unicode. And, they expanded on their variety of appearances by including people with red hair, white hair, and more. Alexander Robertson, another researcher at the University of Edinburgh who partook in the study, said in the press release, "This result should encourage the addition of more emoji options for self-representation — adding to those that have been recently made available, such as red hair."

This study shows that the inclusive range of emoji skin tones have given people of color a way to accurately express themselves online, and that representation — even with something that’s considered minute or even superficial, like emojis — is super important. While most of us don’t think twice about the emojis we use in our texts and send out into the Twitterverse, they have a major impact IRL when it comes to promoting diversity, representation, and inclusivity. Thumbs up.

Update: This article has been updated to remove a mischaracterization of Emogi.