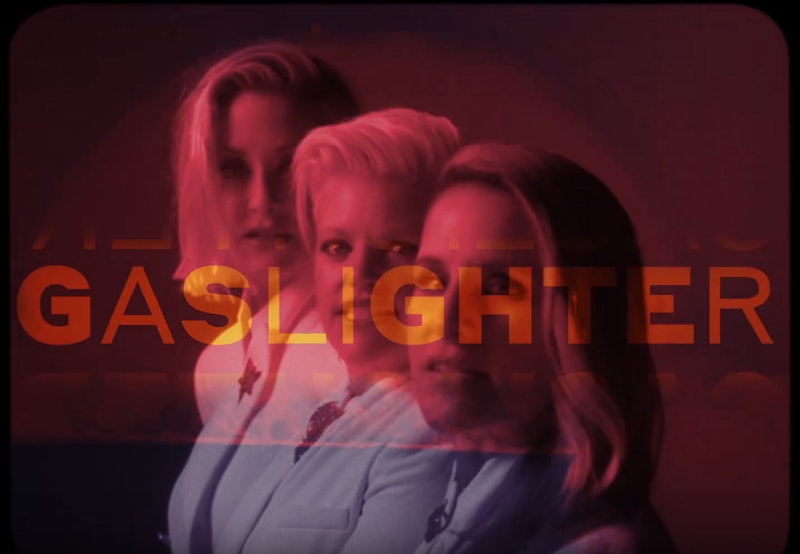 The Dixie Chicks are still not ready to make nice. A decade after they last released music, the bad-ass country trio is back and this time they're going after the gaslighters of the world. The Dixie Chicks' new single "Gaslighter" proves that they're taking no prisoners and it's glorious to witness — unless you're Adrian Pasdar, ex-husband of lead singer Natalie Maines and inspiration for "Gaslighter."

"We moved to California and followed your dreams," Maines sings in the first verse, seemingly referencing her actor ex. "I believed the promises you made to me / Swore that night 'till death do us part / But you lie-lie-lie-lie-lied." Maines confirmed on the Spiritualgasm podcast that parts of the Chicks' upcoming album would be inspired by her tumultuous split from Pasdar. And going from the fiery lyrics, the new song undoubtably tells Maines' side of the story, and it's an outright stormer. “Gaslighter/Denier/Doing anything to get your ass farther,” the group belts out on the soaring chorus. “Gaslighter/Big-timer/Repeating all of the mistakes of your father.”

"Gaslighter" could just as easily be a political manifesto as well. The video features Maines and fellow members Emily Strayer and Martie Maguire marching in fierce military outfits, spliced with vintage Americana footage of women and the sound of people pledging to "tell the truth, the whole truth, and nothing but the truth." A break-up anthem that could also be applied to the Trump administration? Sounds like a Dixie Chicks classic.

As the Chicks revealed in a Beats 1 interview with Zane Lowe, "Gaslighter" was the first song written for their new album, which will be produced by Jack Antonoff, who got the job solely on the strength of the new single. “At the time, we thought we were gonna write with a bunch of different people and get different producers, and we wrote with him and we’re like, ‘He needs to produce it,’ ” Strayer said, as per Rolling Stone. “This needs to be the sound for this album, ’cause he blew us away. It was such a fun song to start with.”

"Gaslighter" is the lead single and title track of their new album, which will be released on May 1. Gaslighter will be their first record since 2006's Taking the Long Way, released in the wake of their controversial comments about the Bush administration's handling of the Iraq War, and the huge backlash that nearly derailed their career. Despite the political outcry, that album went on to win the Grammy for Album of the Year, among other accolades.

More like this
Taylor Lautner Thought Taylor Swift's 2009 VMAs Interruption Was A "Skit"
By Alyssa Lapid
The Jonas Brothers' New Album Has A Very Meta Name
By Alyssa Lapid
Brad Pitt Wants To Share The Spotlight With This Celeb In Shania Twain’s “That Don't Impress Me Much”
By Alyssa Lapid
The Spice Girls Are Set To Reunite At King Charles III’s Coronation
By Sam Ramsden
Get Even More From Bustle — Sign Up For The Newsletter
From hair trends to relationship advice, our daily newsletter has everything you need to sound like a person who’s on TikTok, even if you aren’t.