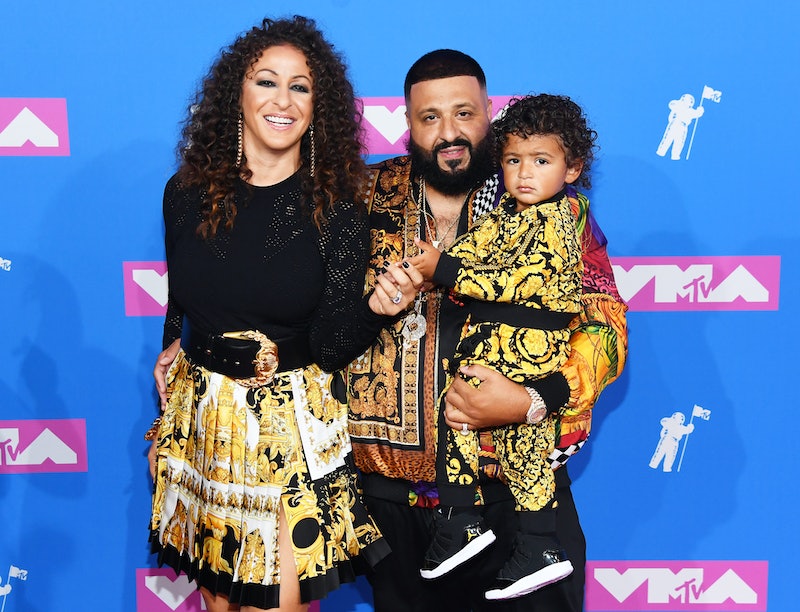 When it comes to iconic celebrity babies, the Khaled family has just welcomed "another one." On Monday, Jan. 20, DJ Khaled announced that wife Nicole Tuck had give birth to their second son in a series of Instagram posts that chronicled the birth of Asahd's baby brother from the musician and producer's point of view. "DR JIN said you ready," Khaled captioned the first post, which showed Tuck's doctor comforting him in the hospital room.

After sharing a few more snaps of Khaled nervously watching and praying over Tuck's labor, he finally announced the birth of his second son with a triumphant photo of himself and the doctor high-fiving. "THANK YOU ALLAH ! THANK YOU MY QUEEN NICOLE !" Khaled wrote on Instagram. "BLESS UP DR JIN ! ANOTHER ONE !!!!!!!!!!!!!!!!!!!!" Neither Khaled nor Tuck has shared the name of their second son yet. Bustle reached out to reps for Khaled but did not receive an immediate response.

Notably absent from the photos is Khaled's older son, Asahd, who has become a celebrity in his own right since being born in October 2016. While Asahd wasn't able to attend the birth of his baby brother, a post on his own Instagram account shares his excitement about welcoming "another one" to the family. "Can’t wait til my baby brother gets here!!" reads the caption from a Jan. 18 post, in which the 3-year-old touches his mother's stomach and smiles for the camera.

Khaled has often spoken about how much having children has changed his life and perspective on life; in September, in an Instagram post announcing that Tuck was pregnant with their second child, the musician reflected on what being a father means to him. "All I ever wanted to do was inspire the world to be great and to leave a legacy," Khaled wrote at the time. "Almost 3 years ago when I found out my queen was expecting our son Asahd I knew my life would change forever and that OUR legacy would soon be on the way."

He continued, "After that blessing I released some of my biggest albums to date (Grateful and Father Of Asahd) inspired by his greatness. Just when I thought life couldn’t get any better, I received another blessing that my queen is expecting an addition to our legacy." Khaled also teased that his second son might also inspire some new music, just like Asahd did with his most recent albums. "I’m feeling more inspired than ever now," he told fans.

Fatherhood has been a major theme of Khaled's music since the birth of his first son back in 2016. In fact, he even credited Asahd — who was a toddler at the time — as an executive producer on his 2019 release, Father of Asahd. "[It] is my best work up to date. My son is executive producing it," he told Billboard in March 2019. As impressive as that is, it turns out that Asahd has actually been contributing to Khaled's music since his birth, as the DJ told Jimmy Kimmel in 2017 that his baby son was in the studio with him during the production of Grateful.

"He's in the studio listening to songs with me, going over the business part of it," DJ Khaled said during an appearance on Jimmy Kimmel Live! "He can tell if the vocals are right, if the beats are right, if the energy is right." Considering how much Asahd has accomplished in his three years of life, it will be exciting to see how many records Khaled's second son manages to produce before he's even out of diapers.