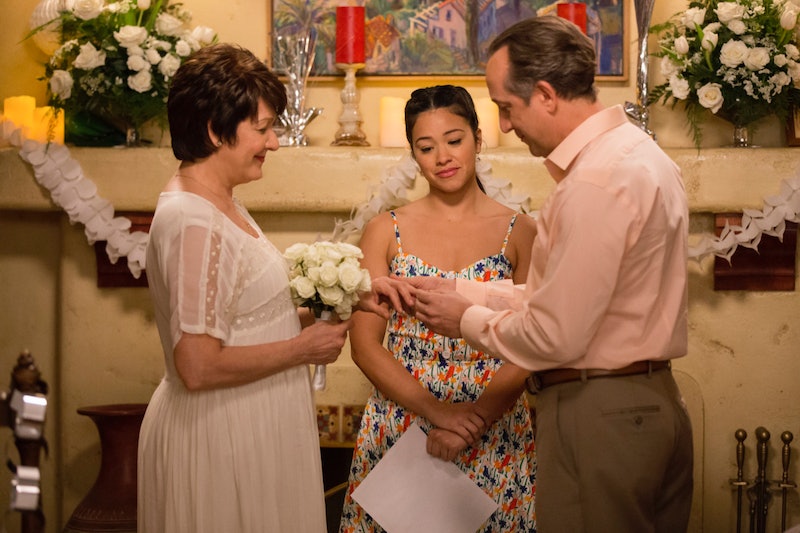 Like most telenovelas, Jane the Virgin is first and foremost a romance. At the heart of the story is the love triangle between Jane, Rafael, and Michael, and Xiomara's will-they-or-won't-they relationship with Rogelio was resolved all the way back Season 3. This leaves only one eligible Villanueva lady left: Alba, the respectful and dutiful widow and Jane's loving grandmother. Last we saw her, Alba was marrying her on-again-off-again love interest Jorge, but the marriage was mostly to help Jorge get a green card so that he could to visit his dying mother in Mexico and return to the United States. Will Jorge and Alba get together before Jane the Virgin finishes its run? There are a couple clues on either side.

Alba met Jorge in the gift shop of the the Marbella and there was an instant connection. Eventually the two started dating, but when Jorge proposed, Alba turned him down. Jorge got back together with his ex-fiancé Sofia, only to later break up. Alba confessed she still had feelings for Jorge, but he said he didn't care about her that way any more and that he wanted her in his life just as a friend. But things took a bit of a turn last season when Jorge's mother got sick back in Mexico. As an undocumented immigrant, going to visit her seemed impossible until Alba, a newly minted American citizen, offered to marry him so that he could legally re-enter the country.

That's where we left off before Jane the Virgin Season 5 began, but those aren't the only signs foreshadowing Alba and Jorge's relationship. Let's take a closer look.

1. Ivonne Coll Says That Alba Is Still Looking For Love

While at some point in her life it might have been enough for Alba to simply honor the memory of Mateo, it looks like she's moved into the next phase of her life and is ready for more. In an interview with AV Club, actor Ivonne Coll explained that Alba still hasn't given up on finding love.

"[Alba]’s always looking for love, how to complete herself," she said. "It’s very hard for her, being a widow, and that’s the only man she knew in her life who she loved. And being from the Latin American tradition, sometimes when you’re a widow, you stay a widow. But she’s Americanized herself in many ways."

2. This Is The Last Season

Creator Jennie Urman Snyder revealed that Season 5 is definitely the final season of Jane of the Virgin. In that case, there's not enough time left to introduce a new character that could tie into the rest of the story as well as Jorge. He and Alba have a history together, and as things stand at the start of Season 5, she's still in love with him — at least somewhat.

3. Not Everyone Will Survive Season 5

In an interview with TVLine, creator Jennie Snyder Urman revealed that Season 5 would include a wedding, a pregnancy, and — tragically — deaths. As in, plural. "[T]here are deaths," she admitted. "It’s a telenovela. People are going to have to die."

While you never know what's going to happen on Jane the Virgin, it does seem possible that either Jorge or Alba might be the unlucky ones to pass away this season. They've already had their wedding, it's too late for them to have a pregnancy, which only leaves one remaining option —that they can hopefully escape.