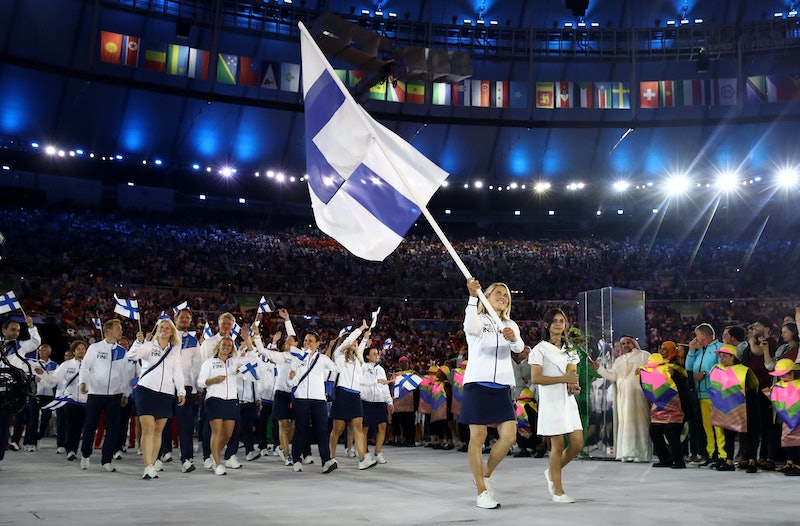 There are few more quintessentially Olympic moments than the Opening Ceremony. The gorgeous show from the host country, the lighting of the torch, the parade of athletes who have worked their whole lives just to get to that track, wearing that outfit. It may surprise you to learn, then, that athletes don't have to be at the Opening Ceremony, no matter how important the event is.

The Olympics as a whole relies heavily on ceremony, and the opening ceremony is a crucial part of that. Take the Parade of Nations, the leader of which is always the same country: Greece, where the Olympic games originated in ancient times. Later, the final stretch of the Olympic torch relay sees multiple important athletes from the host country honored with a chance to hold that ceremonial fire — which, don't forget, was originally lit in Greece, in ancient Olympia, by a woman dressed as a Greek high priestess. Before the flame can officially begin the games, though, one athlete and one official have to take the Olympic Oath — and then, only then, can the games really get started.

For many athletes, participating in the ceremonial aspects are a huge part of the Olympic experiences — but for others, unfortunately, the Olympic opening ceremonies are too much of a physical inconvenience.

"Athletes have got to make many sacrifices in their lives," said James Goddard, a British swimmer, in an interview with the Guardian prior to the 2012 London Summer Games. "Ideally we'd all like to go but performance comes first and we all respect that decision."

"Some people really get lifted by it and some people think the physical drain is too much. It's a personal choice. The whole point of the Olympics is performance," Mark Tewksbury, a Canadian swimmer, told Huffington Post in 2012. "That's the memory you want to take for the rest of your life and you've still got the closing (ceremonies). The closing is there and it's really the athletes' ceremony. It's awful to walk in an opening and regret it because it impacted your performance."

And considering how long the opening ceremonies tend to be, the athletes really do have to take performance into account. The Parade of Nations certainly isn't a long walk, especially for people whose bodies are as finely tuned as any Olympic athlete's must be. But before the parade, there are hours of standing — and then there are also hours of standing after the parade, as the rest of the ceremony continues. And then don't forget the late finish, and then the potential challenge of getting home. For someone with a competition the next day — really, the competition they've been training their whole lives for — the risk of tired legs and a late bedtime just isn't worth it.

In the PyeongChang 2018 Olympic Games, there might even be another reason for athletes to skip the opening ceremonies. Officials are worried that low temperatures might pose a challenge for athletes and attendees in the open air venue that they're planning on using for the opening and closing ceremonies. While they're stockpiling hand-warmers and blankets for spectators, any athletes who decide to attend might just have to layer up on the long underwear so that nothing gets in the way of their flag-waving and their country costumes.

As someone watching from home, though, you have nothing to worry about. The opening ceremonies will be the same magnificent show, no matter how many of the athletes don't attend. You'll still see the K-Pop stars rumored to perform, the parade, the lighting of the Olympic flame. And just remember — this option is nothing new for the athletes, who always have the choice not to attend. Every opening ceremony you've ever watched has been missing someone.