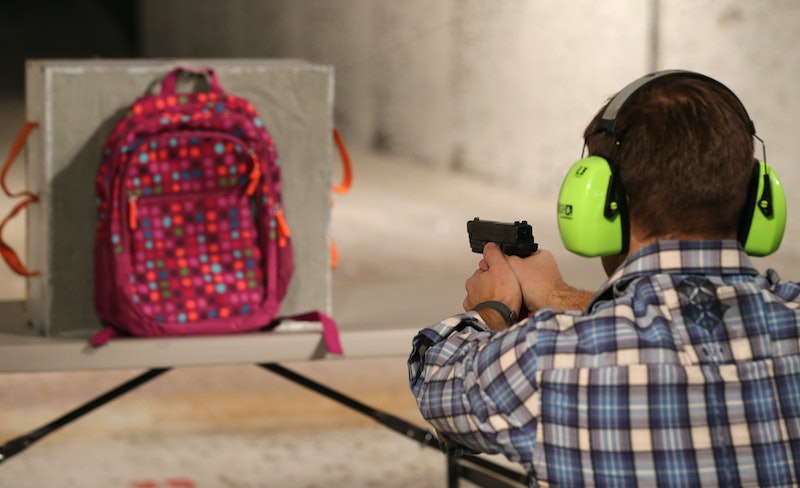 Following the shooting at Marjory Stoneman Douglas High School in Parkland, Florida, the sale of bulletproof backpacks is on the rise. However, as reports emerge of parents increasingly investing in these items, many are probably wondering if bulletproof backpacks actually work. As it turns out, these backpacks should stop a bullet from a handgun, but would do little to inhibit bullets from a rifle, like the AR-15 semi-automatic weapon that was used in the Parkland shooting.

According to HuffPost, multiple manufacturers of bulletproof backpacks have reported an increase in sales since the Parkland shooting. Bullet Blocker, a Massachusetts company founded in 2007 shortly after the Virginia Tech massacre, reported to HuffPost that it has seen about a 30 percent increase in sales of these backpacks since the Parkland shooting on Feb. 14.

Joe Curran, the company's founder, noted to HuffPost: "The last time we had an upswing like this one was after Sandy Hook and the truck attack in [Nice], France. Any violent occurrence gets people thinking in survival mode."

HuffPost reported that backpacks made by Bullet Blocker and another distributor, Guard Dog Security, contain Level IIIA ballistic protection, said to be the highest level of "soft body armor" available on the market.

WTVD, an ABC affiliate in Durham, North Carolina, had a local security firm test the level of protection provided by one of Guard Dog Security's backpacks. The station's investigation found that the backpack stopped bullets from two different handguns, a 9mm and .45mm. It also stopped a one ounce bullet from a 12-gauge shotgun. However, in the test, the backpack was unable to stop any bullets from an AR-15 semi-automatic rifle.

ABC 13 News, which broadcasts out of Houston, Texas, conducted a similar test and found the same results — that bulletproof backpacks will not protect against rifle fire. According to Jeffrey Kimball, a former police officer and firearms instructor at Arms Room in League City, Texas, the backpacks are made of the same material police wear in bulletproof vests. This material is not considered what Kimball referred to as "rifle proof."

Moreover, Kimball also added to ABC 13 that in order for a backpack to be rifle proof, its armor would have to be made of metal plates, not kevlar — the synthetic fiber currently used in the backpacks and in police vests. Kimball pointed out that metal plate protection is typically only found in military or SWAT team body armor and that placing such armor in a book bag would make it incredibly heavy.

But while Kimball acknowledged this lack of rifle protection, he also told ABC 13 that he still thinks that there is no harm in buying a bulletproof backpack, as it offers some added measure of protection.

Right now, students are afraid and you want them to feel confident that they have something to protect themselves until police show up or their parents pick them up. I think they are definitely worth the investment because right now nothing has been done and kids are asking for something to be done. As a parent, if my child is going to school, I want to ensure she has some form of protection and not just ensure that the door gets locked before the shooter comes in.

However, not everyone concurs that bulletproof backpacks are worthwhile. Ken Trump, a school safety consultant who resides in Cleveland, Ohio, told NBC News:

Trump added that bulletproof backpacks may provide some comfort, but overall will likely do little to improve school safety — and that funds should be invested elsewhere. "There's feeling safer and then there's actually being safer," Trump noted.

Overall, while bulletproof backpack sales are increasing in the wake of the Parkland shooting, there is certainly not consensus that investing in them is a good idea — especially because they wouldn't have stopped the semi-automatic rifle bullets in the attack at Marjory Stoneman Douglas High.