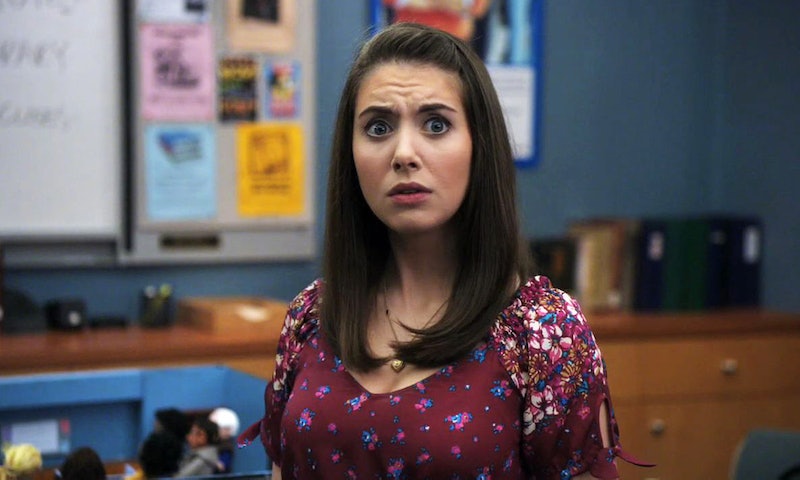 Well, the research is in and people really do hate a goody two shoes. (Apologies to any goody two shoes-es who are reading this.) According to a new study from the University of Guelph, do-gooders receive hate when they are seen as a threat. Or, as the university's website puts it, "highly cooperative and generous people can attract hatred and social punishment, especially in competitive circumstances." In other words, if you're super helpful and nice to people at school or at work, those same people just might be plotting your demise. Sorry?

The study was conducted by professor Pat Barclay and undergraduate student Aleta Pleasant from the Ontario university, who "used a public-goods game with punishment to test whether antisocial punishment is used as a means of competing to be chosen by suppressing others’ cooperation," according to their abstract. (A public-goods game generally involves participants being given tokens that they can either contribute to good of the group or keep for themselves. Other factors are added in or changed depending on the experiment.)

The study continues, "As predicted, there was more antisocial punishment when participants were competing to be chosen for a subsequent cooperative task (a trust game) than without a subsequent task ... This suggests that antisocial punishment is a social strategy that low cooperators use to avoid looking bad when high cooperators escalate cooperation."

For example (that I totally just made up): An overachiever on a work project does most of the research and is totally cool with helping everyone, but then the person who barely did anything writes the names on the front of the project and puts hers first and talks badly about the helpful employee behind their back. Or, you know, something like that.

Barclay and Pleasant's research shows that people do like cooperators in a lot of cases, but the problems arise when people are in some sort of competition with each other, like in a workplace. Barclay told the University of Guelph website, "You can imagine within an organization today the attitude, 'Hey, you’re working too hard and making the rest of us look bad.'"

Barclay also said that evidence of this kind of activity has been found in every culture in which it's been studied and that it can be traced back to early hunter-gatherer humans. He said that what they want to learn with the research is "Why are people built in such a way that they will react against that overly generous person, and want to bring down the person who appears too good?"

Other research and studies about do-gooders and selflessness have been conducted in the past. A 2010 study from Craig Parks and Asako Stone titled "The desire to expel unselfish members from the group" had similar findings, and showed that people disliked unselfish members of a group as much as those getting a free ride, according to Psychology Today.

Barclay thinks that by shedding light on this disposition, the anti-do-gooder activity could start to change. He spoke about it in light of saving the environment, because that involves individual and group work, and some people who aren't taking action might try to bring those who are down. "One potential benefit of this research is that by identifying and raising awareness of this competitive social strategy and what it does, maybe it will be less likely to work," he said.

Basically, if you are hating on do-gooders, maybe stop and ask yourself why.