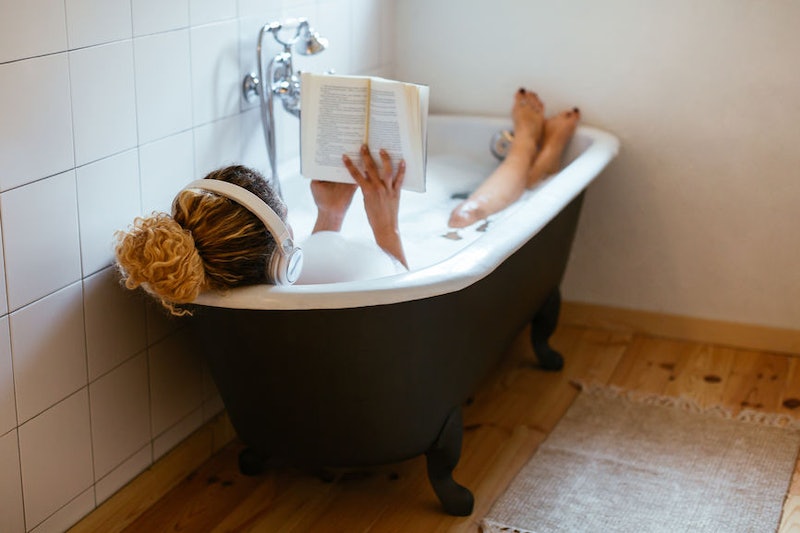 Listen: depression is a significant illness that warrants proper medical treatment, a fact that shouldn't need stating but all too often is disregarded. That treatment might take the form of talking therapy, or medication, or often a combination of both; despite the well-intentioned advice of your favourite auntie, depression is not something typically resolved with a "positive outlook" or "a bit more fresh air." That said, there are lifestyle changes that can complement your treatment, as the NHS recommends, and a new study has identified one activity you can perform from the comfort of your bathtub. Do hot baths help depression? Researchers suggest the answer is yes.

As the Guardian reports, scientists from the University of Freiburg found that taking two hot baths a week led to a "clinically relevant" improvement in symptoms of depression, to an even greater degree than physical exercise. They worked on the hypothesis that depression is influenced by a disturbed circadian rhythm, improperly regulated body temperature, and a resulting poor quality of sleep. The best quality of sleep is attained when the core temperature of the body drops during the night, the scientists noted — but in people with depression, their core temperature remains elevated.

To test this hypothesis, the researchers divided 45 participants with depression into two groups for an eight-week study. The first group took two approximately 20-minute afternoon baths a week, at a temperature of 40 degrees Celsius; after their baths, they were wrapped in warm blankets with hot water bottles in order to keep their body temperature raised for a further 20 minutes. The second group followed a structured exercise program for 45 to 50 minutes, performed two times a week.

Hot baths, the scientists suggested, could be beneficial to people with depression who are unable to exercise. What's more, the fast-acting method could be used to "close the gap" between first taking antidepressants and experiencing an effect. According to Psychology Today, selective serotonin reuptake inhibitors, or SSRIs — the most commonly prescribed type of antidepressants — can take four to six weeks to work. Hot baths could supplement SSRIs, the scientists said, and alleviate depression symptoms while patients are waiting for their medication to kick in.

The study isn't definitive: 45 participants is an extremely small sample size, for a start, while a significant amount of participants dropped out before the final eight-week assessment. What's more, taking baths at 40 degrees Celsius might not be attainable for many people; in the study, several participants noted they had difficulty reaching the required temperature at home, and had to visit a spa to do so.

Certain health conditions might preclude you from taking very hot baths, too, so it's worth checking with your doctor before you take the plunge (sorry). But if you get the go-ahead? In the best case scenario, you find a new activity to supplement your depression treatment. Worst case scenario? You just have a lot of really nice baths.