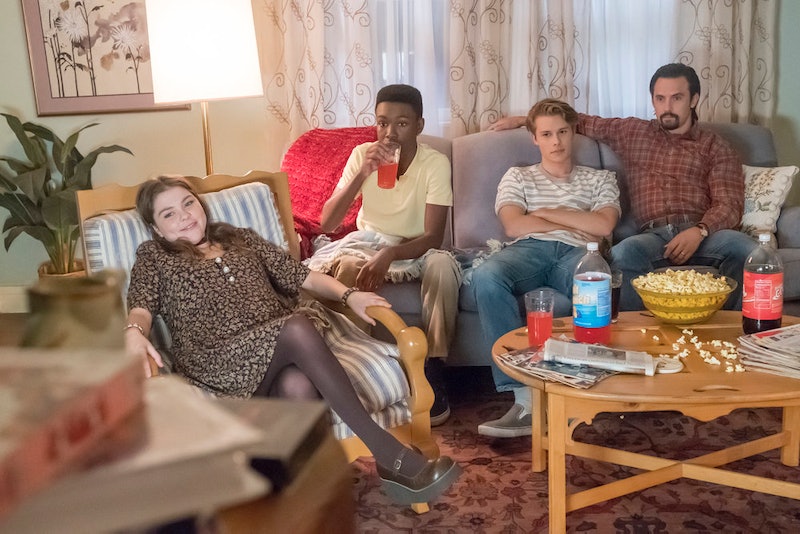 Earlier this season on This Is Us, audiences were steamrolled with yet another emotional bombshell when they learned Jack had a brother who seemingly died in the Vietnam War. Us fans hadn't seen this mystery sibling alive in any previous scenes, and when Jack took Randall to the Vietnam Veterans Memorial in Washington, D.C. in the most recent episode, his death seemed to be confirmed as Jack got emotional staring at a certain name on the wall. (I paused the show and he was looking at the "P" as in Pearson section, but I couldn't read the exact names he was looking at.) Randall laid a supportive hand on his dad's shoulder, but it wasn't clear if he knew just who they were visiting, leading fans to wonder if Jack's family knows about his brother on This Is Us.

At least right now, it seems like Jack's kept his brother and his brother's death under wraps. Rebecca didn't start dating him until after he was back from Vietnam, so she wouldn't have met the other Pearson boy beforehand. We also know that Jack's downplayed his experience with the war in general — last season he said he was a mechanic and implied that he had it easier than a lot of the combat soldiers, but a flashback told a different story when it showed him hopping off a helicopter, gun in hand.

After their visit to the memorial in D.C. in the Nov. 28 episode, Jack confirmed to Randall that he hadn't told Rebecca what he truly saw and experienced overseas. It's clear that the ordeal messed with him, as it did for a huge number of the soldiers who made it back from the conflict. Years had passed since Jack had returned, but those wounds linger — according to Time, more than 200,000 Vietnam veterans were still experiencing PTSD in 2015, even 40 years after the war ended. Particularly if Jack was with his brother when he was killed, it's possible he would bury that part of his life deep inside.

The photo that first revealed to viewers the possible fate of Jack's brother was buried in a box in the garage — another clue that the family isn't aware of the situation. Jack sought it out after a camping trip with Randall and Kevin during which the boys weren't getting along, and he was apparently reminded of his relationship with his own brother. The fact that he had to dig through storage to get a glimpse of his sibling rather than taking a peek at a frame on the mantel implies that there are no traces of him throughout the Pearson home.

Family in general has been a sore spot for Jack. Not his own wife and children, of course, but the home he was raised in as a child wasn't the best, as we've seen through his experiences with his neglectful, abusive, and alcoholic father. Rebecca didn't even meet Jack's father until the Big Three were around 10 years old and he was on his deathbed, so there's no chance that she ever visited his childhood home or spoke with his other family members about the brother.

The small glimpse viewers saw of a young Jack and his brother seemed to show that the two were pals, and that bond likely only increased as they continued to deal with the same troubled home life and even served on the same platoon, which seems to be the case based on the photo Jack pulled out. That brotherly love seemed to influence his own parenting of Randall and Kevin, who never could get along as children and even into their teenage years. He desperately wanted the two to be close. Now it looks like that's because he knows what it's like to have a brother he could count on, but also because he knows what it's like to lose one, too. As for whether Randall put the pieces together, that remains to be seen.

If he did, it's likely he kept his father's secret, because Randall seemed to sense that it was big of his father to open up — and also challenging for him. He would have let his dad tell the others in his own time. Maybe Jack never got that chance. And, after his death, it might have come out. But, at least for a moment in that flashback, Jack found some peace in visiting his brother's memorial with his son — a surprisingly big step for the notoriously private father of three.