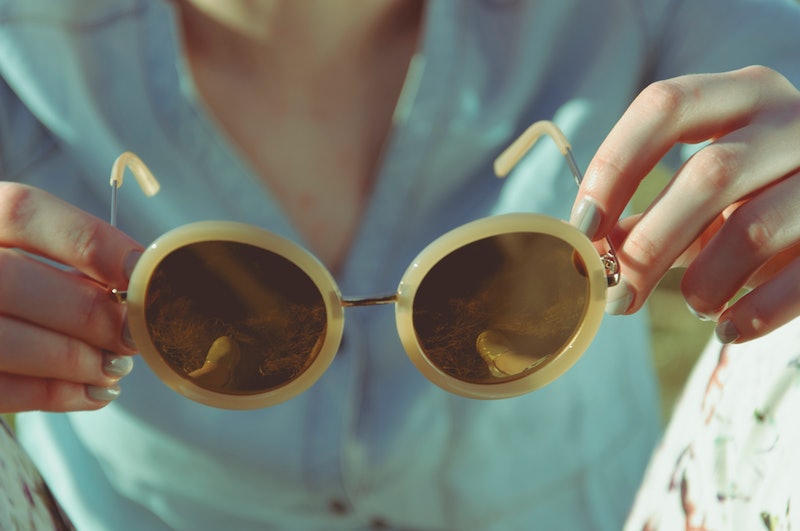 In case you missed it, Aug. 21 is a Very Big Deal for anyone in the continental United States. For the first time in nearly a century, a total solar eclipse will pass over the country from west to east, leaving millions of wonderstruck people in its wake. You may already know how important eye protection is, but do sunglasses work for a solar eclipse? Unless you were raised by dolphins who taught you how to use echolocation to get around, you probably want to retain the use of your vision, so protection is super important.

First things first: The eclipse will take place on Monday, Aug. 21, beginning in Oregon and traveling east across the United States. The American Astronomical Society (AAS) has a guide to when and where to spot the eclipse on its website. Got it? Great.

Now for the less-than-fun stuff. The sun is obscured during an eclipse, but it's still bright enough to literally burn your eyes to a crisp if you gawk for too long. It's only safe to view the eclipse with your naked eyes when the sun is totally covered by the moon — a brief minute or two that only takes place if you're located in the path of totality.

As a result, the AAS strongly recommends wearing specialized glasses while you're viewing the event:

"The only safe way to look directly at the uneclipsed or partially eclipsed Sun is through special-purpose solar filters, such as “eclipse glasses”... or handheld solar viewers. Homemade filters or ordinary sunglasses, even very dark ones, are not safe for looking at the Sun; they transmit thousands of times too much sunlight."

So there you have it! No matter how unfashionable eclipse glasses may be, your regular sunglasses just aren't going to cut it.

The AAS also recommends against looking through unfiltered binoculars, telescopes, cameras, or pretty much any optical device. You can find their eye safety advice on their website.

Even during an eclipse, the sun's light is so strong that it can still sunburn your retinas. One doctor told Space.com that he's seen patients come in with "crescents burned into the back of the eye," so that he could tell almost exactly what part of the eclipse they tried to watch. Yikes.

Unfortunately, eclipse glasses are in short supply, having sold out in many online stores. After the AAS caught wind of people selling unapproved solar filters and viewers, which may or may not protect your eyes, they put together a list of reputable vendors with authorized protective glasses. Given how quickly solar protective gear has been selling out, though, you may want to act fast or head to a physical retail store.

If you can't get your hands on any protective glasses, you can view the eclipse in alternative ways. By passing sunlight through a small opening, you can see a projection of the eclipse on the ground. The AAS suggests using a colander to block the light or watching the shadows cast by the shade of a tree. Again, though, you shouldn't look directly at the sun (even with sunglasses) — watch the shadows on the ground.

If all else fails, you can always watch NASA's livestream of the eclipse beginning at 1 p.m. ET. Even if you don't have eclipse glasses, there are still ways to watch of the coolest natural wonders of the century. Just be safe, so you'll be able to watch the next one in 2024.