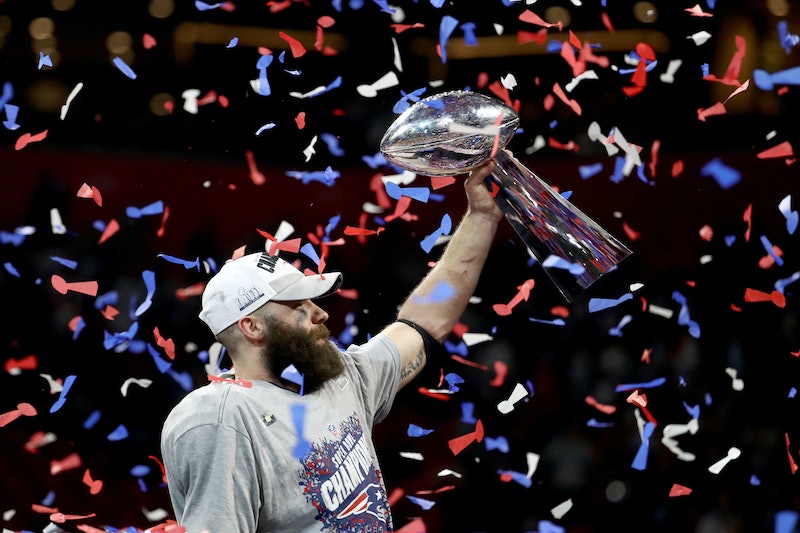 At the end of almost every Super Bowl game since 1987, Disney has aired an ad featuring star players from the championship team enthusiastically proclaiming that they're going to a Disney theme park following their momentous victory. While this ad represents a Super Bowl tradition, you may be wondering if Super Bowl winners really go to Disney. As it turns out, many of them do — and there's a funny story behind the development of this famous phrase.

As SB Nation reported, from 1987 onward, Disney has aired a commercial immediately following the conclusion of the Super Bowl game, only skipping a few years in that time period. As the outlet noted, the ad typically features a narrator asking one of the winning team's players (often the quarterback or the Super Bowl MVP), "You've just won the Super Bowl, what are you going to do next?" In response, the player replies, "I'm going to Disney World!" and "I'm going to Disneyland!" Notably, as the outlet pointed out, different ads air in different regions of the country, with the player referencing the Disney theme park closest to that region. ABC News noted that players who are picked to say the phrase usually do indeed go to Disney World or Disneyland, where they are then featured as part of a celebratory parade.

Indeed, this year, the New England Patriots' quarterback Tom Brady and Super Bowl MVP and wide receiver Julian Edelman were featured in Disney's ad — and both players will soon head to Disney World. In fact, the Disney Parks Blog revealed that a Patriots parade will take place in Disney World's Magic Kingdom on Monday afternoon.

Former Disney CEO Michael Eisner wrote in his 1998 memoir that his wife, Jane, initially came up with the idea for using the phrase, "I'm going to Disney" as a slogan for the company, ABC reported. As the outlet described, Eisner wrote in his memoir that the idea came to fruition when the couple was having dinner with Star Wars creator George Lucas and the first individuals to fly around the world without stopping, Dick Rutan and Jeana Yeager. As the former Disney CEO wrote:

It was late and the conversation hit a lull as we waited for our food. So I asked Dick and Jeana, 'Well, now that you’ve accomplished the pinnacle of your aspirations, what could you possibly do next?' Rutan responded, without hesitation, 'I’m going to Disneyland' And of course I go, 'Wow, that’s cool! You made the right choice.' But my wife interjects: 'You know, that’s a good slogan.'

In 1987, Phil Simms, a former New York Giants quarterback and Super Bowl MVP, was featured in the first Disney post-Super Bowl ad exclaiming that he planned to go to Disneyland following his team's victory, SB Nation reported. Since then, the commercial has generally become a staple of Super Bowl ad programming, the outlet noted. As Brady and Edelmen head to Disney World on Monday, it's clear that this tradition will likely continue for the foreseeable future, seemingly much to the delight of the victorious players.