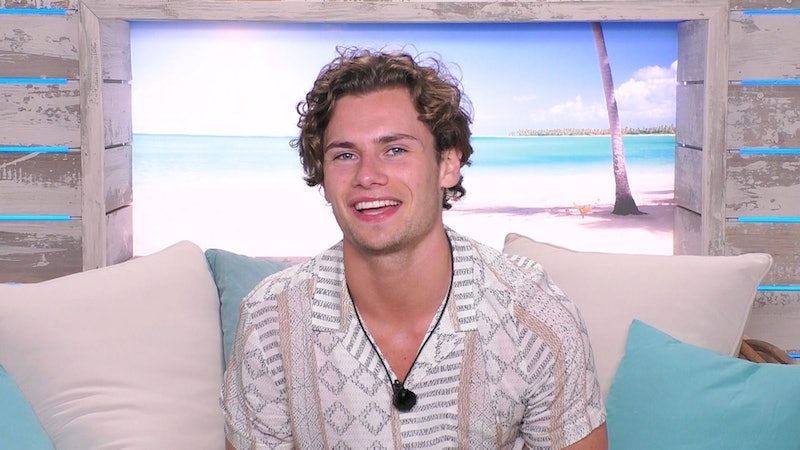 Only three days into Love Island, and there's already a love triangle of sorts. Who'd've thought it, eh? While Joe Garratt and Tommy Fury's quest for Lucie Donlan's love is starting to get on the nation's nerves, there's always new drama to find in the strangest places. One such place being on Joe's lock screen, which as it happens is a photo of himself (no, I'm not joking). So, do all the islanders have themselves as their phone background, or was this a personal choice of Joe's?

Thankfully Joe's lock screen isn't an anomaly, as a rep for the show tells me that yes, all the islanders have pics of themselves as their wallpaper. Whether this is to help them differentiate their phones from each other's is unclear, as the production team have already kitted their phones out with those lush, personalised cases that you can find on the Love Island merch store. Just take a look at Tommy's phone on the daybed (skip to min 0.33) while he has one of his famous chats with Lucie, and you'll see the transparent cover with his name on the back.

While it's a bit weird that the phone cases aren't enough to distinguish which phones are which, I guess as time elapses they'll change their current wallpapers to a photo of them with their chosen baes. Still, I can't imagine opening my phone to be greeted by my face staring back at me.

Anyway, enough about phones. After last night's bombshell that new girl Mollie-Mae Hague is about to enter the villa, it's only natural to think about the drama that's about to unfold. Rest assured that resident agony uncle Curtis Pritchard will be on hand to dilute any unfolding drama, but only time will tell to see whether or not Hague will garner Tommy's attention. Obviously, viewers won't know until tonight's episode, but it seems this is already a collective thought if these tweets are anything to go by.

Regardless, viewers will have to wait until Friday for the first re-coupling of the series to see the major drama unfold — especially regarding whether Lucie will stick with Tommy, go back to Joe, or pick a different guy altogether. Currently, Anton Danyluk and Joe are the ones at risk in the villa, but depending on who the girls decide to choose this Friday (June 7) or Sunday (June 9), all the boys are at risk of being the first one dumped off the island. As Radio Times points out, even with the addition of Mollie-Mae, the boys still outnumber the girls, "which means one of the lads is on his way out." Yikes.

Unless the Love Island production team are hiding some more new arrivals somewhere in Mallorca to twist things up during the dreaded re-coupling night, it's safe to say that the fire pit isn't the only thing that's going to be heated when Caroline Flack greets the islanders for the second time this series.

Love Island continues every weeknight on ITV2 at 9 p.m.