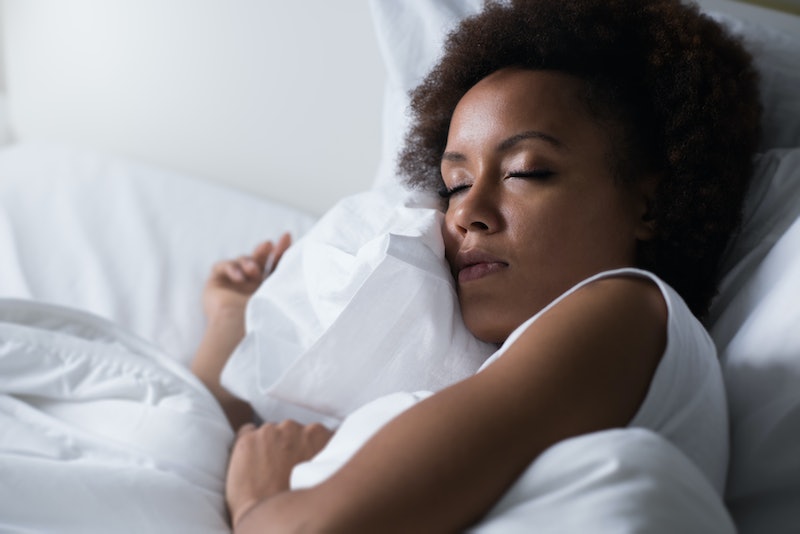 It's a question that's been floating around for ages: Do women really need more sleep than men? And if so, is it really because their brains are more complex? "Research" is often cited as proof of both claims, but as it turns out, it might be a little more complicated than that.

Every so often, claims that a sleep scientist has found women need 20 minutes more sleep than men because their brains "multitask" more during the day make the rounds. In 2010, it was in the Daily Mail; in 2016, Metro UK; and so on and so forth.

But the claim might be a distortion of the truth. Theresa Fisher took a deep dive into the subject at Van Winkle's in 2016, and according to Professor Jim Horne, to whom quotes are attributed in the Daily Mail piece, he "never said that women actually need more sleep, they just tend to take more sleep." Horne explained his research, which was conducted in 1996 (so, definitely not new), to Fisher, noting, "Women tend to sleep for around 15 minutes longer than do men, which is more apparent in those younger than 45 tears of age, and has been reported in a variety of studies, including ours, as well as from UK National Statistics." He continued, "This is not because of myths relating to ‘more delicate constitutions’, but may well be due to women having more deep or slow wave sleep (SWS), and a sign of their having greater brain (ie. cortical) recovery during sleep. Which in turn indicates that women tend to work their cerebral cortices harder than does the age-related man."

So: Women do tend to sleep longer than men, but it's not entirely accurate to say that they need more sleep than men.

However much sleep women need, though, what we do know is that they're not getting nearly as much as men do in the first place. Another study, by scientists in North Carolina found that women suffer from a lack of sleep at more than twice the rate of men. Additionally, women tend to sleep more lightly, are more easily disturbed, and have a harder time falling back asleep than men. Women's sleep is so poor that Arianna Huffington has declared sleep the next feminist issue.

“The way to a more productive, more inspired, more joyful life is getting enough sleep,” Huffington told an audience during a TED talk, according to Mediaite. “And we women are going to lead the way in this new revolution, this new feminist issue. We are literally going to sleep our way to the top.”

According to Mediaite, Huffington said she worked herself to the bone, and neglected sleep, while launching the Huffington Post while also helping her daughter get into college. She now recommends naps and meditation as a way to refresh the brain, and she published the book The Sleep Revolution: Transforming Your Life, One Night At A Time to let women know that sleep is the secret to regaining control of their lives.

While the National Sleep Foundation recommends seven to nine hours of sleep for adults a night, most women don't get that. Personally, I can get by on as little as five hours a sleep if I have to, but if this goes on for an extended period of time I devolve into a crabby mess, and the slightest problem or misunderstanding can lead me to burst into tears. Consider, too, Lauren Graham's experience that she averaged four to five hours of sleep a night during the seven seasons of Gilmore Girls, as related in her book Talking As Fast As I Can: From Gilmore Girls to Gilmore Girls (and Everything in Between); however she writes that didn't feel tired, but rather that she was energized by all of the things she had to do.

And, as anyone who's worked a 15-hour day knows, if you come home and go right to sleep, there isn't time for much else in your life. I have many times sacrificed sleep just so I can have some time to myself awake, away from other people. The problem is that this type of sleep schedule isn't sustainable for most people over the long term, and it eventually catches up with you, as it did with Graham. At the end of Gilmore Girls, she said she tired. Not tired of the character or the show, but physically exhausted.

Graham also said in an interview with Parade that her six months on Broadway in the Guys and Dolls revival was even more exhausting than Gilmore Girls. "It was so tiring and stressful that for a good month I would just sleep and sleep and then go to work,” she told Parade. “And I’m strong. I never had a sick day in seven years on Gilmore Girls. My people were farmers in Ireland. We know how to do it! But this was draining."

Aside from just making you tired and cranky, not getting enough sleep can affect your health too. The Telegraph reported that more than half of women face health problems due to not getting enough sleep. Researchers at Duke University Medical Center found that women who reported unhealthy sleep are at an elevated risk for heart disease, type 2 diabetes, and depression.

This is not good news, because it's entirely preventable. So, what's the solution? Go ahead and hit snooze. You deserve it.

More like this
Dyson Is Dropping Futuristic, Air-Purifying Headphones
By Rachel Lapidos
10 Organizations To Support On Latinx Women's Equal Pay Day
By Caroline Burke and Mia Mercado
Celine Dion Reveals She’s Been Diagnosed With Stiff Person Syndrome
By Jake Viswanath
9 Balance Training Exercises That'll Improve Your Mind-Body Connection
By Carolyn Steber
Get Even More From Bustle — Sign Up For The Newsletter