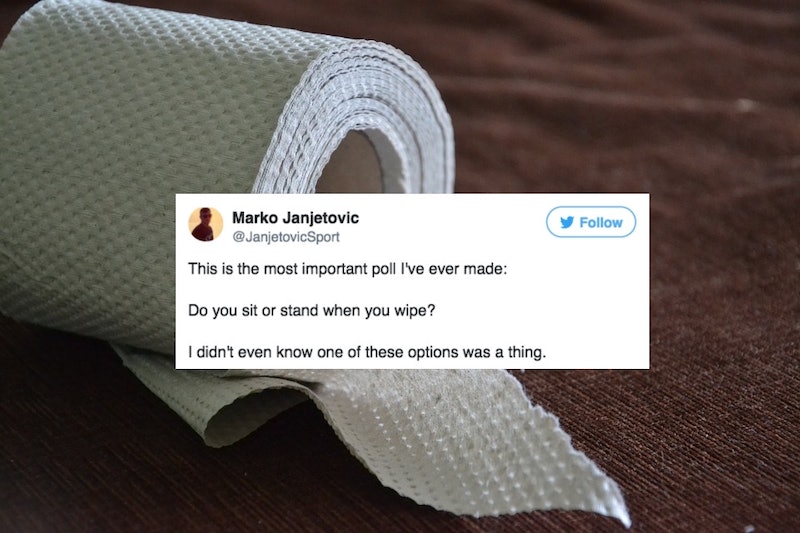 Leave your delicate sensibilities at the door, friends, because the question on the Internet's mind lately is an invasive one. Do you sit or stand to wipe after you poop? You might think the answer is obvious, but before you hit that back button, think for a second. How much do you really know about other people's bathroom habits compared to yours? It's not exactly in the realm of small talk. For that matter, it's not even medium talk. This is the kind of information reserved for doctors, eternal best friends, and apparently, strangers on the Internet, who are presumably safe because they'll never know your true identity.

But I digress. All this is to say that while you might assume everyone does it the same way as you, that's not the case. People have been furtively asking each other whether they sit or stand to poop for ages, and on Tuesday, BuzzFeed reignited the ancient debate. According to the article, the author's friend had gone to a comedy show recently, and the comedian brought up wiping habits. When he took a quick poll via a show of hands, the result was mind-blowing: About half the audience said they wiped, and the other half said they sat.

Are you shocked and appalled by this information? So was the audience. According to the article, people on both sides of the debate were surprised to see that anyone would choose a different way. Like any journalist worth their salt, the BuzzFeed writer immediately texted their friends to see how deep this rabbit hole goes. Most people sat or leaned, saying it gave them better access to the area where bathroom business went down, so to speak. But a small but significant minority defended their decision to stand, which they claimed provided a better view while wiping. (I warned you that this article wouldn't be for the faint of heart.)

Naturally, the comment section had Opinions on the subject, but like before, people seemed to be evenly divided. Some sit, some stand, and some hover above the toilet seat. Then there were those who wanted to know why we couldn't just talk about nice things for a change.

"Dear lord why am I read[ing] or answering this?" wrote one such user.

But this isn't the first time the "sit vs. stand" bathroom debate has been ignited. (In fact, BuzzFeed produced a video about this very topic back in 2015.) It's actually a fairly common question on Ask Reddit, and it pops up on Twitter every now and then as well. Each time, standers tend to get most of the flak.

But is there a right answer here? There doesn't appear to be much, if any, medical advice on the subject when it comes to wiping position. Generally speaking, as long as you're wiping front to back until you're clean, your physical position doesn't make a huge difference.

When it comes to the act of pooping, though, it's an entirely different story. Despite their purpose, modern toilets require you to sit in an awkward hunch, which often makes it harder to get things through the metaphorical pipes. In a Medium article called "You're Sitting on Your Toilet Wrong," Kevin Roose explains:

"In his 1966 book The Bathroom, which is still considered the bible of bathroomology, Cornell professor Alexander Kira called the modern, sit-down toilet 'the most ill-suited fixture ever designed.' Kira believed — and subsequent studies have confirmed — that toilets work against our bodies by forcing us into unnatural angles when we sit down to defecate.

So when it comes to pooping, yes! There is a better way to do it, and most of us are probably doing it wrong. But when it comes to the aftermath, the jury is still out. If it's been working so far, keep doing your thing — even if you're a stander.