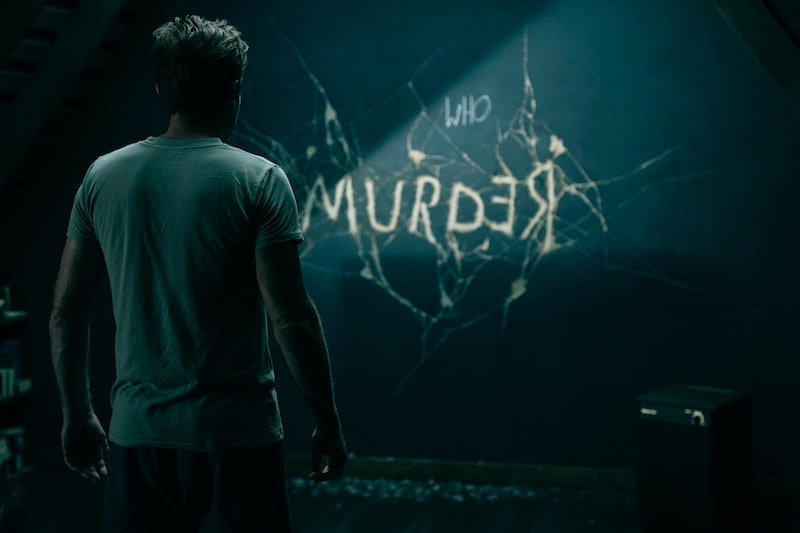 Heeeere's Danny! Danny Torrance — well, now Dan Torrance — is returning to the big screen in Doctor Sleep (out Nov. 8), the sequel to The Shining. Both films are based on novels by Stephen King, and a lot of time passed between their publication; The Shining came out in 1977 and Doctor Sleep in 2013. And, since the horror writer maintained that length of time in the plot, the main events of the Doctor Sleep movie take place 40 years after the The Shining, according to the film's official description.

Fiction being fiction, King could have written a sequel that takes place immediately after the events of The Shining. But the author was interested in what an Danny's adult life would look like, including how traumatized he would still be from the events that took place at the Overlook Hotel. (Which include seeing terrifying tableaus and ghosts, thanks to his "shining" psychic abilities, plus his father trying to murder him and his mother — lest you forgot.)

"Danny Torrance was such a little boy, and he survived such a horrible experience at the Overlook Hotel that time would go by and I would think, I wonder what's going on with him," King said in a 2013 interview with ABC News. As the novelist periodically mused about Danny's progress, he'd think of him in in terms of the years that had passed in the real world. "He'd be 20 now, and then it would be he's 25 now, and 30," King explained.

The author also noted that he was inspired by the question of whether Dan would follow in his father's footsteps in any way. "The big reason to go back was he had come from a situation where he had survived an abusive father, who was also a drunk," King said. "And we know from experience that people in those situations have a tendency to repeat what they grew up with."

In the newer story, Dan has issues with drinking, like his father did. Ewan McGregor, who plays the adult character in the movie, says in a behind-the-scenes video for the film (via Entertainment Weekly), "Dan Torrance’s philosophy early on in the story is not to use the shining. He’s drunk to suppress the horrible visitations, the spirits that are from the Overlook Hotel."

"One of the things that I wanted to see was a man at the end of his rope," King says in the featurette. "You can't really recover until you’ve finally reached your bottom, and I wanted to see that in Dan on the screen."

Dan ends up making some changes in his life and meets a young girl, Abra (Kyliegh Curran), who has "the shining" like he does. (They meet telepathically long before they meet in person.) He also finds out about a group of people, the True Knot, who hunt down those who have psychic abilities.

It's well known, meanwhile, that King had some issues with Kubrick's 1980 adaptation of his novel, though it's renowned as a horror classic. In the 2013 ABC News interview, he explained, "In Kubrick's movie, the Overlook Hotel freezes, and in Stephen King's book, the Overlook Hotel burns. But that was the difference in temperament. He was cold and I was warm." With his Doctor Sleep adaptation, director Mike Flanagan (of The Haunting of Hill House) planned to make a sequel that would be connected to both tellings of The Shining. Speaking to Bloody Disgusting about his film being an adaptation of a new book and a sequel to a well-known movie, Flanagan said, "There is no version of the world where I am trying not to acknowledge one of the greatest films ever made. There's no upside in shying away from that reality."

And as King explains in the behind-the-scenes video, "Mike's movie stands on it’s own, but it's also a terrific sequel to Stanley Kubrick's film."

Now, it just remains to be seen what audiences will think of the movie sequel to both an iconic book and an iconic film, and whether they're just as compelled by a grownup Danny as they were his father.

More like this
Your Guide To Watching 'Everything Everywhere All At Once' In The UK
By El Hunt and Sophie McEvoy
Owen Thiele Asked Sundance Attendees About Films That Don’t Exist
By Grace Wehniainen
Jennifer Coolidge Hunted For Jewels & Lashes In J.Lo’s Hotel Room
By Jake Viswanath
Keke Palmer Shares The Sex Of Her & Darius Jackson's Baby
By Jake Viswanath
Get Even More From Bustle — Sign Up For The Newsletter
From hair trends to relationship advice, our daily newsletter has everything you need to sound like a person who’s on TikTok, even if you aren’t.