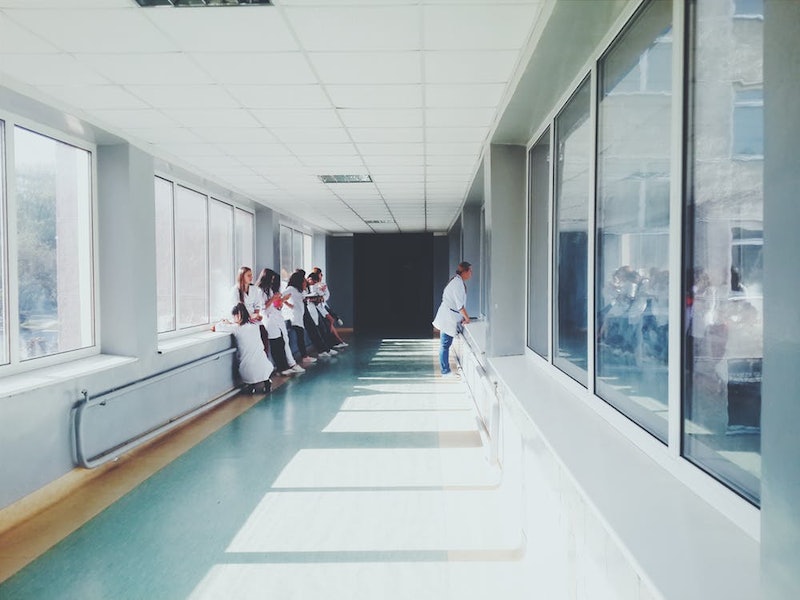 Finally, after 150 years of uncomfortable gynecological exams full of cold prongs, painful stretching, and repeated commands to "scootch down," the speculum is being redesigned.

For those of you who don't know what a speculum is or who, like me, have never seen one because you squeeze your eyes shut for the entirety of your pelvic exam and shout "Whatever just get it over with, please!" let's review. According to Wikipedia's slightly unsettling description, a speculum is "a medical tool for investigating body orifices." A vaginal speculum has two prongs shaped a bit like a duck's beak, and is usually made out of plastic or stainless steel. During a pelvic exam, a doctor inserts the closed prongs into a woman's vagina, and then opens them, dilating the vagina so they can visually inspect the vaginal canal and cervix.

Having a metal duck bill spread open your vagina feels about as enjoyable as you would imagine. And if it doesn't sound like it was designed with comfort in mind, that's because it wasn't. Most speculums used today are based on an 1840s design by Doctor James Marion Sims who, while designing the device, experimented on enslaved women without the use of anesthesia.

The experience is so unpleasant, that one study found some people avoid gynecological exams for that very reason. And given how important gynecological exams are for a person's health, that's a huge problem. So, designers Hailey Stewart and Sahana Kumar of the design firm Frog set out to create a new speculum that would make pelvic exams more pleasant and less painful.

In a Wired article that details their process, Stewart and Kumar explained that when they first decided to design a new speculum, there were three main problems they wanted to address: the sound "like a can opener"; the "freezing cold" temperature; and the feeling, "as if someone was stretching your insides like a rubber band." They experimented with a number of designs, including one device with three prongs instead of two, which would allow doctors the same field of vision without feeling as "stretchy" to the patients, and also had a 110 degree handle, which left more space between a doctors hand and the patient's pelvis, so you wouldn't have to keep "scootching down."

Over time, however, the designers realized that to creating a comfortable pelvic exam experience was about more than updating the speculum — it was about transforming the entire space and process. The pair teamed up with another Frog designer to create Yona, a project which, in addition to the speculum, includes an app with a guided meditation to help patients prepare for exams, a stress ball, and socks to cover your feet in the stirrups - anything to make one's visit to the gynecologist more pleasant.

"It's never going to be perfect," Kumar told Wired. "So how do we at least prepare people emotionally for how it's going to be, and make them feel like they got some value out of it at the end?"

Stewart and Kumar are not the first to attempt to redesign the speculum, Wired points out. Other iterations have included a device that inflated inside your vagina like a little balloon, and a tampon-sized camera that would allow doctors to see the cervix without prying open the vaginal canal. But none were widely adopted by doctors.

Getting doctors to actually use Yona will certainly be the biggest hurdle. "You could create the most beautiful, most unique, most user-friendly device, but if a doctor doesn't want to learn how to use it, your patient's never going to see it," Stewart told Wired.

Hopefully, for the sake of all humans who have had to sit through an uncomfortable pelvic exam, the new design will catch on.

More like this
12 Aphrodisiac Desserts To Spice Up Your Valentine’s Day
By Kaitlyn Wylde
11 Exercises For Dowager's Hump That'll Help Your Neck Posture
By Carolyn Steber
Kourtney Kardashian’s Wellness Guru Shares Her #1 Tip For Better Health
By Taylor Jean Stephan
Here’s Where The NHS Nurses’ Strike Currently Stands
By Sophie McEvoy
Get Even More From Bustle — Sign Up For The Newsletter
From hair trends to relationship advice, our daily newsletter has everything you need to sound like a person who’s on TikTok, even if you aren’t.