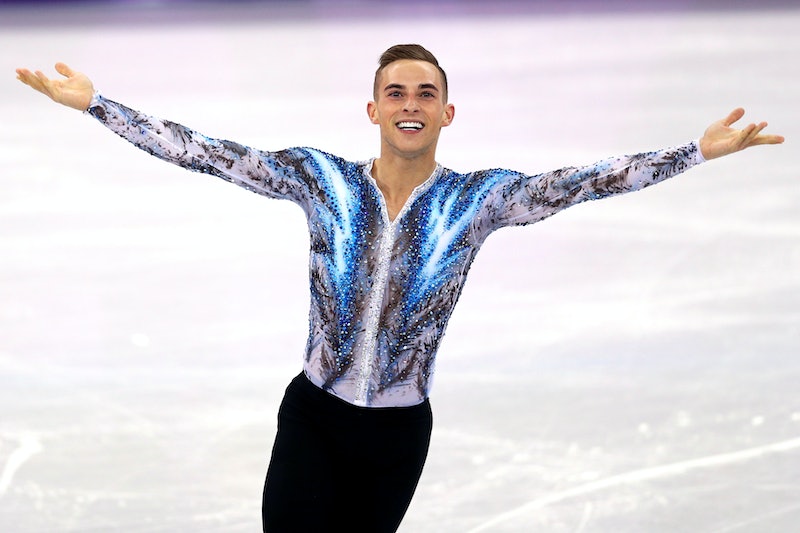 Adam Rippon has officially captured the hearts of darn near everyone watching the 2018 PyeongChang Olympic Games. He's fiercely himself, talented as hell, and also has a personality that just makes us all want to be his best friend. And it's that warmth and personality that leaves us all wanting more, even after the American figure skater sheds his skates and leaves the ice. So, does Adam Rippon have a Snapchat for fans to follow his daily life?

While he's referenced Snapchat in the past, it doesn't appear that he's open with his user name, if he still has one. Some Olympic athletes, like Nathan Chen, have their Snapchat accounts listed on their official FigureSkatersOnline.com profile, but Adam only lists his Twitter, Facebook and Instagram accounts. He may very well have Snapchat, but choose to keep the name close to his chest and only give it out to people he knows personally. With the scrutiny that comes with being an Olympic athlete, it certainly would make sense to want to reserve some private aspect of social media. Whether that is indeed the case is pretty irrelevant for fans who want to keep up with him, though — he's very active on Instagram, including through Instagram Stories.

At the time of writing this article, Rippon has several posts in his Instagram story — he's been documenting some of the serious happenings at the Olympic proceedings, hanging out in the gym, and also getting a little silly within the intense wind that's apparently plaguing the Olympic Village. In part of his story today, he also wished himself and his body a happy Valentine's Day, rather than shouting out any possible romance, solidifying his position as my favorite human being.

Rippon is already basically at Chrissy Teigen pro levels of social media prowess, even though he's recently been thrust into a spotlight that he likely couldn't have possibly anticipated. His personality always shines through in everything he posts, not only on Instagram, but also on Twitter, and he knows it. "I'm proud of a lot of things I've said on Twitter," he said in an interview with GQ. He isn't afraid to clap back at people who may attempt to antagonize him on social media, either.

Rippon, according to TIME, is the first openly gay U.S. athlete to qualify for a Winter Olympics, and that has unfortunately made him the target of some incredibly uncalled for comments from internet trolls. "I don't engage with people who are, like, innately nasty," he told GQ. "I engage with people who are mean and also stupid, because it's so easy to turn it around and make it funny."

As an openly gay athlete, Rippon is representing a group of the population that hasn't typically been visible in these Winter Games. While that certainly doesn't mean he's obligated to be relatable and fun for fans to watch, it is great that he's so open and inviting, perhaps allowing young aspiring Olympians to look up to him even more. "I know what it's like to be young and to feel like you don't belong," he said in the same GQ interview. "I always said that if I had the platform and the opportunity to share my story and make it easier for others, I would — so that, in a way, I can be the role model that I was looking for as a kid."

There's no doubt that fans will be following along with Rippon as the Winter Games continue in PyeongChang, and, judging from how amazing his internet presence already is, he won't be signing off social media anytime soon.

More like this
Kathy Hilton Tried To Explain Why She Misidentified Lizzo As Precious On Live TV
By Jake Viswanath
The Sean Bean Intimacy Coordinator Controversy, Explained
By Sam Ramsden
Kanye West Has The Most Kanye Reaction To Kim Kardashian & Pete Davidson's Split
By Jake Viswanath
Nicola Coughlan Just Revived 'Derry Girls' In The Most Unexpected Way
By El Hunt
Get Even More From Bustle — Sign Up For The Newsletter