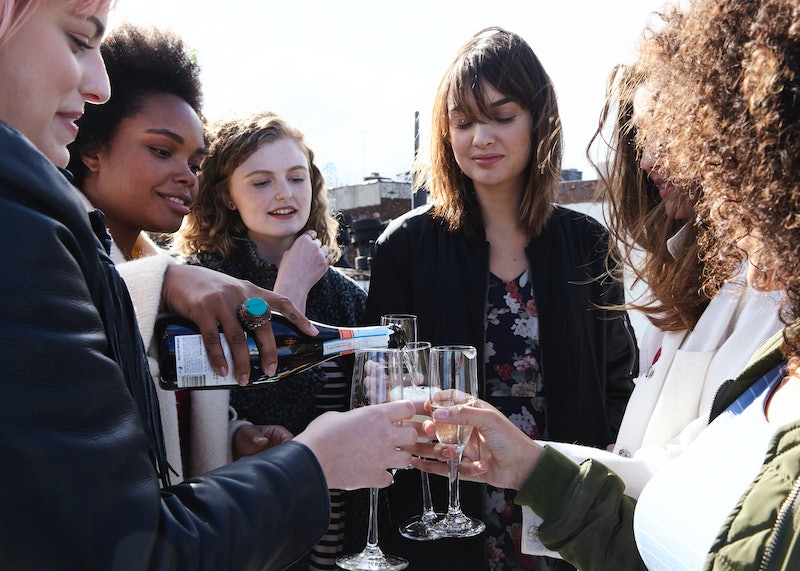 Alcohol consumption, in news that will surprise nobody, tends to spike over holiday periods, and that has left some scientists questioning whether or not there may be a relationship between drinking and menstrual cycles in women, and how they may effect one another. Bustle spoke with the data scientists at Clue, the period-tracking app that uses user data to do research on reproductive health, to get the lowdown on precisely how alcohol can affect your period, and what you might want to do about it.

"In moderation, alcohol probably won’t affect your menstrual cycle," Clue tells Bustle, "but there is a lot of conflicting research." There are three main areas in which scientists have investigated links between menstrual cycles and alcohol: how much alcohol you drink, what happens to the cycle itself, and the consequences of alcohol on hormones.

If you think you may reach for the wine more when you're premenstrual, or that it affects you differently at different parts of the month, you could be right. The luteal phase, which happens just before menstruation, seems to involve different reactions to alcohol compared to other stages of your cycle. "There is some evidence suggesting alcohol consumed in your luteal phase may have more of an effect on your mood than during the follicular phase," Clue tells Bustle. "By both increasing feelings of depression and anxiety, while at the same time increasing feelings of enjoyment from the effects of alcohol." This idea comes from research done in 2011, which also indicates that women with a family history of substance use disorder might feel these effects more. "Researchers suspect," Clue adds, "that people who experience symptoms of premenstrual syndrome may tend to drink more alcohol premenstrually. However, other studies note no change at all."

When it comes to the cycle itself and how alcohol affects it, the research doesn't give a clear picture. "Some studies note relationships between alcohol consumption and cycle irregularities, but generally only when alcohol is consumed chronically at high doses," Clue tells Bustle. If somebody has a substance use disorder, it's probable that menstrual changes will ensue, from an absence of a period entirely to cycles that are all over the place and a lack of ovulation. Women with substance use disorders may have a hormonal disadvantage when it comes to beating their disorder, too, in the form of estrogen. "New preliminary research on mice suggests that when higher levels of estrogen are present, there is more activity in the reward centre of the brain, which may make alcohol feel more rewarding," Clue tells Bustle. That could have big implications for treating substance use disorder in women in particular.

For women who drink alcohol in moderation, however, the evidence doesn't suggest any serious effects of alcohol on your menstrual cycle. "When looking at moderate drinking, there may be no measurable change in menstrual cycle function," Clue says. "In fact, in one study, people who abstained from alcohol had more cycle irregularities." That study, which was held in 2014 in Denmark, involved over 82,000 women who became pregnant after being surveyed, and those who didn't drink alcohol had more irregular periods — but the researchers noted that this "may reflect other health problems in these women rather than an actual effect of alcohol on the menstrual cycle," so more research needs to be done to sus out the actual cause and effect.

When it comes to alcohol and hormonal levels, it's possible to draw a few firm conclusions. "After drinking, multiple studies have measured increases in estrogen levels, and sometimes increases in testosterone and luteinzing hormone," says Clue. Luteinizing hormone is responsible for stimulating ovary follicles and help you ovulate. And the influence of alcohol over the cycle is an interesting one. "One particularly rigorous study," Clue tells Bustle, "examined how drinking affects hormone levels during different phases of the menstrual cycle. Multiple hormonal differences were measured, such as increases in androgen levels during the follicular phase, and increases in oestrogen levels around ovulation, which persisted throughout the second half of the cycle. This effect has been shown to be stronger after binge drinking." But in case you're worried, don't be. "The hormonal effects of moderate drinking did not to lead to changes in menstrual cycle function," Clue says. Having a few drinks may shift your hormone levels, but the cycle itself seems to proceed normally.

When it comes to fertility, the research is a mixed bag. "One reason for how alcohol could impact fertility is through increased levels of estrogen, which could inhibit follicular development and ovulation —  but this is still only a theory," Clue says. However, science hasn't given a clear answer on whether this happens or not. While a study published in 2017 links low to moderate alcohol consumption and drinking with struggles to conceive, Clue tells Bustle that it's a "weak association", and that "other researchers have linked higher alcohol consumption to infertility, and some found no connection between alcohol and fertility at all." And they also urge caution about reading too much into studies. "There is some evidence to suggest that drinking low to moderate amounts of alcohol may be associated with delayed menopause, but more research is needed here too," Clue says.

Overall, you don't need to be too concerned about your menstrual cycle when it comes to alcohol consumption. However, we're still not entirely sure what abusing alcohol may do to the body and menstrual functioning in the long run. People who feel they may be struggling with substance use issues can call the National Helpline of the Substance Abuse & Mental Health Services Administration, 1-800-662-HELP (4357) for assistance.