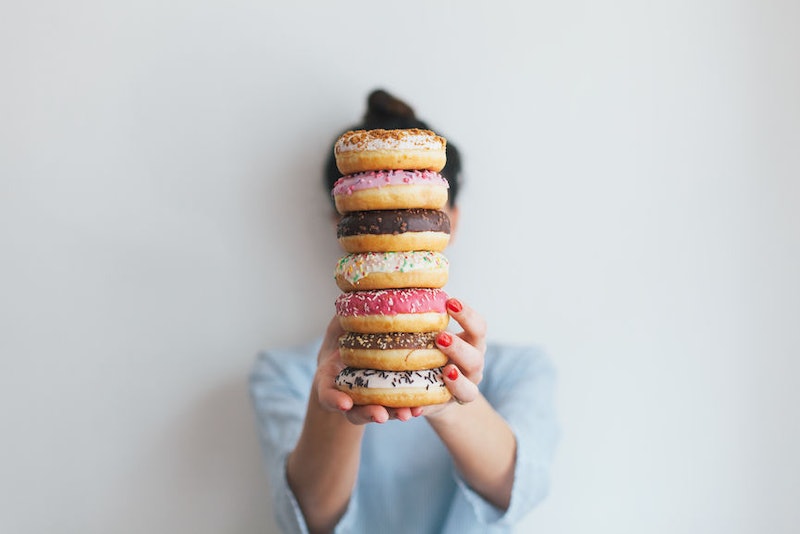 Raise your hand if you're more likely to reach for a chocolate bar rather than a piece of fruit when you're feeling tired. You're not alone, as many of us would unashamedly do the same. After all, a sugar boost is what you need when you can barely keep your eyes open, right? A new study has found that there may be a biological reason for being tired and eating junk food but that the behaviour may also result in supremely unhealthy consequences.

The study, which was published in the Journal of Neuroscience, was carried out by a team of researchers at the University of Cologne in Germany. 32 healthy men aged between 19 and 33 were asked to participate in a series of experiments.

They were first given a dinner of pasta and veal followed by an apple and a strawberry yoghurt. Some were told to go home and wear a device that could track their sleep while others were asked to remain in the lab overnight where they were deprived of sleep by undergoing various activities.

The next morning, every participant came back to the lab to rate their hunger levels. 29 of the men had levels of their blood sugar and hormones linked to appetite and stress measured too.

They also underwent an MRI scan which measured certain brain activity. During the scan, they were shown several images of junk food such as chocolate bars along with images of items that you couldn't eat such as a hat. They were given a fictional three euros (approximately £2.70) to spend on these items and were asked to choose how much they would be willing to spend for each.

This entire experiment was repeated a week after the original one. But this time, the group who were kept awake all night were allowed to sleep while the other group were deprived of that all-important shuteye.

The results proved to be particularly interesting. Although every participant had similar levels of hunger, blood sugar, and hormones in the morning (whether they had slept or not), those who had been deprived of sleep were willing to pay more money for a snack. These individuals also had higher levels of something called des–acyl ghrelin in their blood. This is related to ghrelin which is also known as the "hunger hormone," as Healthline reports.

Those who hadn't slept also showed a higher level of activity in the amygdala section of the brain — the part where the rewards that come from consuming food are processed — when images of edible items were shown. More of a link between the price people would pay for food and the levels of activity in the hypothalamus — the part that regulates impulses like appetite — was also seen.

OK, so this may all sound a tad confusing, but the study does have some significant consequences for scientists. In a nutshell, it showed that people who were tired were more likely to pick up junk food and that this effect may not be down to hormones, as previously thought, but rather due to the way the brain processes the rewards that food gives.

Not only may a lack of sleep make you want unhealthy food more, but it may also cause you to spend more money on it. That explains why you might splurge on an expensive takeaway rather than go to the trouble of cooking something yourself.

Lead author of the study, Dr. Julia Rihm, told the Daily Mail that the data suggests "one way a lack of sleep can promote overeating and obesity risk." However, the results cannot be viewed as the gospel truth as the researchers did not study the effect of tiredness on healthy food consumption.

I'm praying that deep down our brains love the taste of a green juice or nice leafy salad. Unfortunately, my love of early morning biscuits suggests that may not be the case.