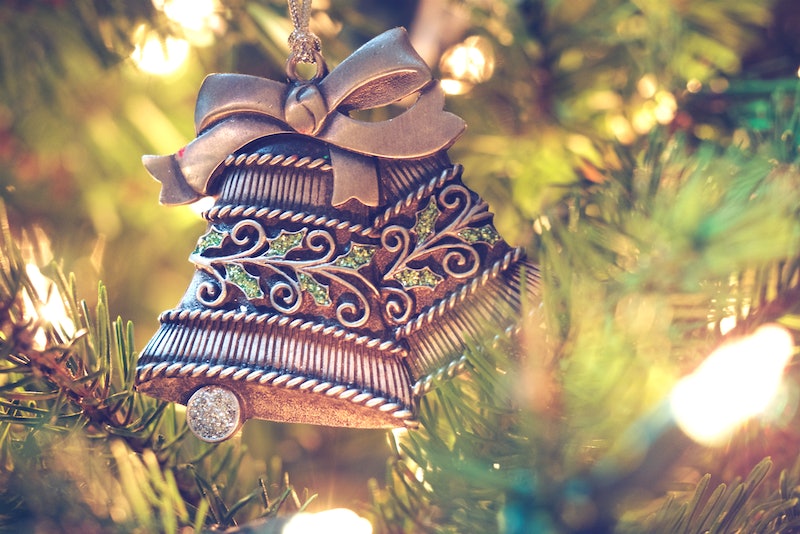 It's no secret that the holiday season sidles a little earlier in the retail calendar every year, to the point where the recorded screams and rattling chains of October's Halloween displays are often broken up by the strains of "Jingle Bells" two aisles over. According to AdWeek, some retailers defend their choice by claiming that Christmas music makes you buy more, putting you into such a jolly spirit that you don't think twice about dropping cash on presents you wouldn't otherwise buy. Given how many people loathe holiday music, though, it's understandable to be a little skeptical of this theory. This calls for an investigation.

Christmas music tends to be polarizing. Either you love it, or it makes you want to puncture your eardrums with a fork. In 2012, music psychology researcher Victoria Williamson backed up this idea. As she explained to NBC News at the time, there's a U-shaped relationship between our reaction to music and the number of times we hear it. At first, we like a song more the more often we hear it, a phenomenon known as the "mere exposure effect." (It's so named because "mere exposure" is enough to make someone like a song.) But at a certain point, familiarity gives way to boredom, and the repetition is irritating rather than exciting. Add in the fact that the holidays can be an emotionally draining time of year, and you're stuck having to ignore something you find annoying or stressful, which would make anyone grumpy.

Research has supported this over the years. A 2011 Consumer Reports survey found that 23 percent of Americans admitted to dreading seasonal music each year, and in a 2014 poll conducted by the Research Intelligence Group in Montreal, 36 percent of respondents said they had left a store sooner because they disliked the music. Strike one for the "Christmas consumer" theory.

On the flip side, holiday music isn't always unwelcome. Some research has shown that Christmas music and scents actually make shoppers happier with the store — as long as the right balance is struck. So while nearly a quarter of Americans hate Christmas music, there's some evidence that it is capable of putting you in a better mood. The key is not to overload shoppers with holly-jolly happiness. Retail music expert Danny Turner told Newsweek he usually tells clients to stick with the classics and keep a 60/40 combination of holiday and regular music. Not only does it keep customers happy, but it also keeps workers from getting the "humbug attitude."

It's a cutesy phrase, but holiday burnout is real. In fact, according to some psychologists, Christmas music can be legitimately taxing for shop employees, who endure an enforced holiday spirit experienced by no other population on the planet.

Everyone finds it annoying when cardboard Santas and blow-up reindeer start popping up in stores before anyone even has a chance to carve their jack-o-lanterns, but shopping trips rarely take more than a few hours. Eventually, you can leave the store with the bags of Halloween candy you found on clearance and return to a holiday-free existence. That's not the case for retail workers. For three months of the year, the majority of their waking hours are spent listening to the same seasonal playlist over and over again in a relentless loop — all while dealing with the joys of working in customer service. Not even Santa's elves could make it through that kind of experience unscathed.

If you don't believe me, believe clinical psychologist Linda Blair, who believes the yearly barrage of Christmas music can damage workers' mental health. Speaking to Sky News, she explained:

"People working in shops at Christmas have to learn how to... tune out Christmas music because if they don't, it really does make you unable to focus on anything else. You're simply spending all your energy trying not to hear what you're hearing."

In other words, ignoring Christmas music is harder work than it sounds, and it can leave people mentally exhausted when they hear it day in, day out.

Given that holiday spending can generate as much as 30 percent of retailers' sales each year, it's no wonder they put so much thought into creating an appropriately festive environment. Unfortunately for the holiday haters out there, that usually translates to "all Christmas music, all the time." Maybe Santa will visit with some noise-cancelling headphones for next year.

More like this
Why Experts Say Sleeping With A Fan On Isn’t Totally Risk-Free
By Sophie McEvoy
RushTok 2022 Is Here & TikTok Is Just As Obsessed As Last Year
By Sarah Ellis
Kim Kardashian Is Releasing A Line Of Earbuds With Beats
By Alexis Morillo
Your Daily Horoscope For August 10, 2022
By Mecca Woods
Get Even More From Bustle — Sign Up For The Newsletter