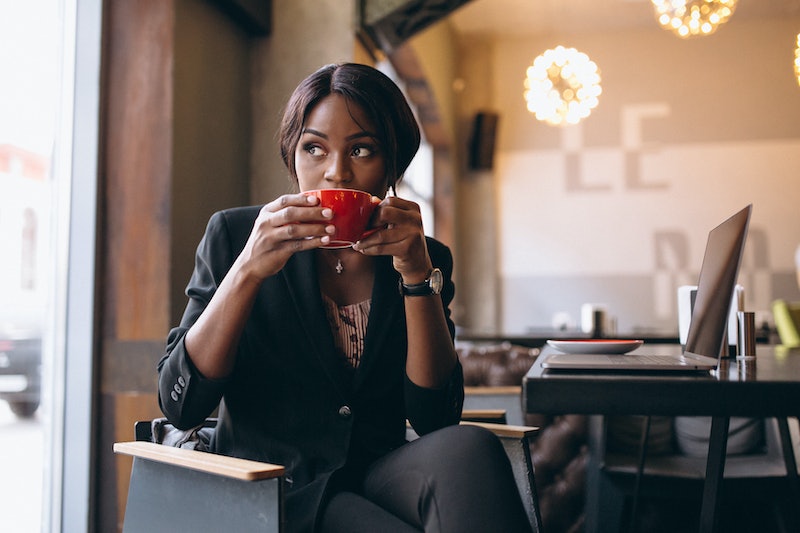 The human body is a perplexing flesh puzzle that often seems deliberately contradictory when it comes to treating it — as I, a person with adult acne who's changed their skincare routine countless times because their skin frequently decides on a whim that it no longer enjoys the selected products, know all too well. Case in point: migraines. While caffeine is often touted as a remedy, a new study published in the American Journal of Medicine has found that drinking coffee can actually cause migraines — if you exceed a certain amount of cups. Bodies! Why must you toy with us so?!

Researchers from Harvard University's T.H. Chan School of Public Health asked 98 adults who experienced migraines between two to 15 days a month to keep a diary for at least six weeks, recording their caffeine consumption as well as any migraines they experienced. (86 of the 98 participants were women, since women are more likely to suffer from migraines.)

The study didn't just focus on coffee consumption, but incorporated other caffeinated drinks like tea, soda, and energy drinks. Consumption of caffeine in foods like chocolate, for example, wasn't recorded, since they usually contain significantly lower levels of the stimulant.

The participants noted the length and intensity of their migraines, as well as the medication or other remedies they use to treat them. They were also asked to record other possible migraine triggers, including stress levels, alcohol consumption, exercise, and whether they were on their periods, so the study authors could adjust for these factors.

The findings aren't great for coffee devotees: consuming three or more servings of caffeine a day increased the chances the participants would get a migraine either the same day, or the following day. (What constitutes a serving of coffee varies between drinks: the researchers defined a serving as eight ounces (240 millilitres) of coffee, six ounces (180 ml) of tea, and two ounces (60 ml) of an energy drink.)

The researchers did account for the possibility of reverse causation, noting that the study subjects might have drank a lot of coffee to treat an existing migraine. That's why they also looked at migraines occurring the day after consuming a lot of caffeine: because the study participants were more likely to have a migraine the following day, as well as the same day, their caffeine consumption could reasonably be considered a cause.

So does that mean you shouldn't reach for the caffeine if a migraine sets in? Well, it's complicated. Speaking to Time, study author Elizabeth Mostofsky said, "The complex thing with caffeine is sometimes it’s harmful and sometime it’s beneficial," adding, "It really amounts to the dose and the frequency of having it."

Another complicating factor: caffeine tolerance. For participants who usually drank less than one caffeinated beverage a day, even one or two servings of caffeine raised their risk of a migraine the same day. But, as Time notes, other studies have indicated that people who typically drink a lot of coffee might get migraines or headaches if they don't consume their usual amount. What did I tell you? Bodies! Too complicated!

More like this
Ben & Jerry’s New Sundae Flavours Are A Chocoholic’s Dream
By Sophie McEvoy
Here’s What TikTok's "Mascara” Trend Is *Really* About
By El Hunt
90 Epic Truth Or Drink Questions To Play 'Say It Or Shot It' With
By Bustle UK
What The UK Blocking Scotland’s Gender Recognition Bill Means
By Sam Ramsden
Get The Very Best Of Bustle/UK
Sign up for Bustle UK's twice-weekly newsletter, featuring the latest must-watch TV, moving personal stories, and expert advice on the hottest viral buys.