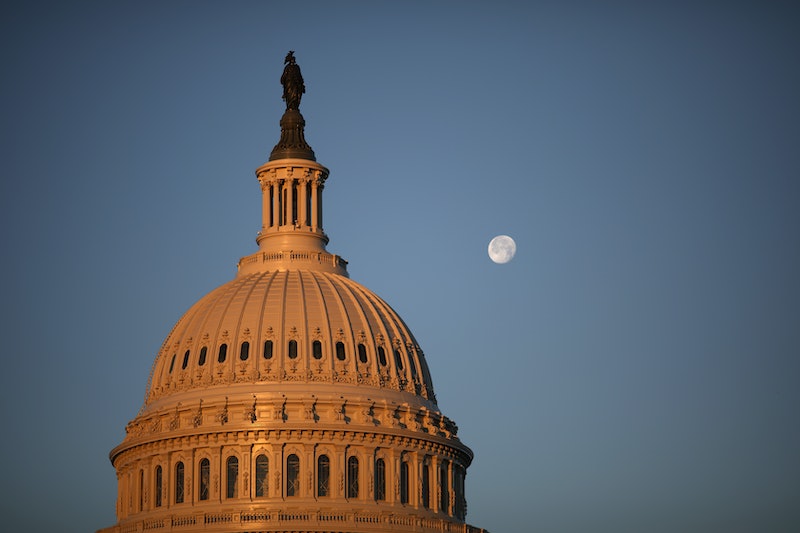 As the partial shutdown nears the one-week mark, hundreds of thousands of federal employees remain furloughed, and around the same number are working without pay. So you might be wondering — is Congress continuing to work during the government shutdown? Not all legislators are currently at work, but notably, all of them are still being paid.

Party leaders have been in negotiation with the White House over a federal government funding bill for more than a week, but reached an impasse over border security. Basically what it boils down to is President Trump pushing to include $5 billion for a southern border wall, and Democratic leaders refusing to comply.

It became clear on Thursday, after both the House and Senate closed their sessions only a few minutes into the meeting, that a new funding bill won't be passed until the new year. That means that the 25 percent of the government affected by the shutdown — including the Departments of State, Transportation, Agriculture, and Justice — will remain closed until the new Congress take its seats.

Congress is not among those affected by the shutdown, since their salaries are paid for through a bill that has already passed. In fact, according to the Office of Personnel Management, Congress can't be furloughed, since they're "entitled to the pay of their offices solely by virtue of their status as an officer, rather than by virtue of the hours they work."

Incoming congresswoman Alexandria Ocasio-Cortez has criticized the policy of continuing to pay legislators during a shutdown, arguing on Twitter, "It’s completely unacceptable that members of Congress can force a government shutdown on partisan lines & then have Congressional salaries exempt from that decision." It's worth mentioning that while lawmakers continue to receive pay during shutdowns, their staffers don't.

Some lawmakers like Sens. Catherine Cortez Masto and Jacky Rosen have opted to donate their salaries during the shutdown to charity, in order to show solidarity with federal employees who are furloughed or working without pay. Even after Congress reconvenes, passing a bill immediately isn't guaranteed since both Trump and a Republican-held Senate would have to approve legislation from a Democratic House.

In the meantime, there's not a whole lot for either chamber of Congress to do until the new session for the 116th Congress begins on Jan. 3, 2019. According to reporters at the Capitol, the halls of Congress were nearly empty Thursday morning, with a few members presiding over an almost entirely absent chamber.

ABC News checked in with all 100 senators to see what they were up to during the shutdown. Not all replied, but of those who did, the answers ranged "spending time with family" to "on vacation" to "working in Washington." Sen. Susan Collins' office told ABC that she was visiting her mother for the Christmas holiday, and returned home to Bangor to brainstorm ideas to end the shutdown. Sens. Orrin Hatch and Mazie Hirono are both in Washington, and Sen. Ben Cardin of Maryland is traveling with his family.