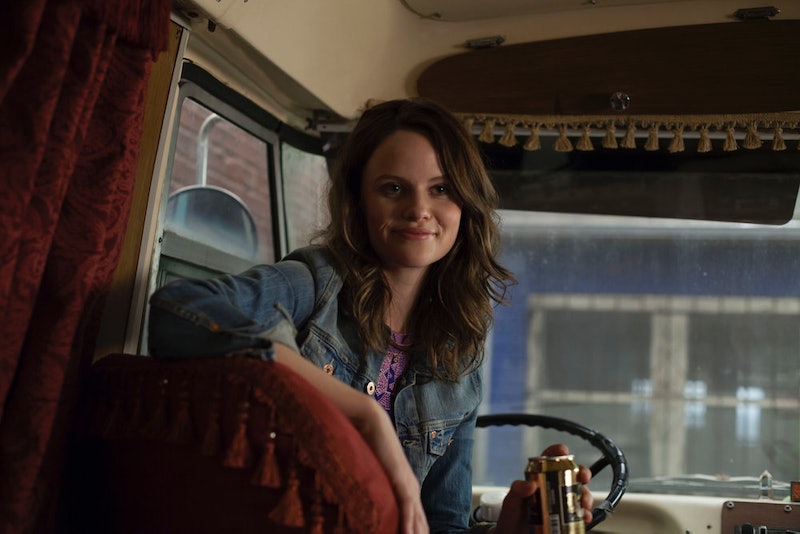 In NBC's supernatural drama series Midnight, Texas, viewers will get a look at an imagined world filled with witches, vampires, angels, and other oddities. In the middle of it all is a girl-next-door named Creek, a human wannabe writer who coexists peacefully with her stange neighbors. But is she really only ordinary citizen in an extraordinary world, or will Creek develop powers on Midnight, Texas? Audiences may feel a twist coming on.

Creek, played by Sarah Ramos, lives in Midnight with her alcoholic, oppressive father and her younger brother, Connor. She dreams of leaving her small town to write, but she stays behind to protect Connor from their unhealthy home life. When newcomer Manfred (François Arnaud) comes to town, the two establish an immediate connection, perhaps because Creek seems like an unassuming, normal young woman. Maybe too normal to be true.

But if fans are looking for that moment when Creek discovers she has supernatural powers, they may be waiting for awhile. In an interview with FanBolt, Ramos assured fans that while there are hidden secrets in Midnight, Texas, Creek's journey will be a bit different than a standard superpower reveal. "No, there’s definitely secrets, but — well, her world is about to get a lot bigger," Ramos said. "I’m trying to think of how to describe it without giving anything away. She’s about to learn a lot that she didn’t know about her childhood and why she’s in Midnight, Texas in the first place."

With Creek in the middle of weekly supernatural battles, uncovering her potential as a human may be an interesting narrative arc for Midnight, Texas. In the same interview with FanBolt, Ramos compares Creek to a "Rory Gilmore-esque" character who loves her small town and its inhabitants. Ramos added, "Creek is kind of in a unique position in town because she came here when she was so young and yet she also doesn’t have powers and so she grew up surrounded by these supernatural beings who she knows are different and knows are weird but also sees them as her family and knows that they will protect her."

This fierce loyalty looks as though it is the backbone of the town of Midnight, and, while Creek may be different, she's still a part of the community. Exploring Creek's relationship with the rest of the Midnighters looks as though it will take precedence over whether Creek is a supernatural being herself. In an interview with NBC, Ramos highlighted Creek's relationship with her community. "They become more of her family than even her immediate family," she said. The actor added that Creek will continue to grow from the young girl who grew up in town into "a fully-formed individual."

As the resident normal of Midnight, Texas, Creek may be helpful in defending the town from any outsiders wishing to harm its inhabitants. Of course anything can happen in this town, and Creek's true destiny is still unknown.