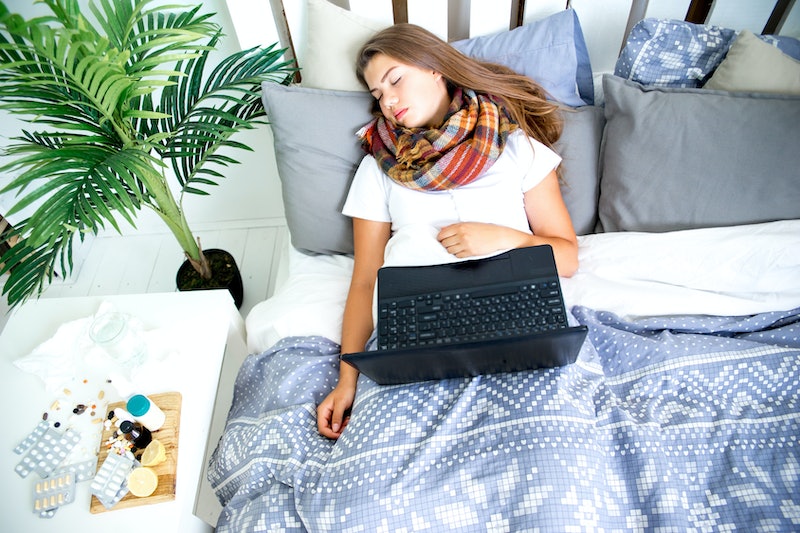 If your mom ever stopped you from having mac and cheese when you were sick because of that myth that dairy increases milk production, I'm sorry to tell you it was probably all for nothing. As it turns out, dairy doesn't make you produce more mucus after all, according Dr. Ian Balfour-Lynn, a pediatric pulmonologist at Royal Brompton Hospital in London, who published new research in the journal Archives of Disease in Childhood. Dr. Balfour-Lynn noted in the review that the milk-mucus myth has been around since the 1200s, and it entered the mainstream in 1946 with the publication of Dr. Spock's Baby and Child Care book by Dr. Benjamin Scott.

So, if your parents are baby boomers, and you have asthma or suffered from a lot of colds and congestion as a kid, your well-meaning 'rent may have deprived you of the joys of all things dairy, including cheese and ice cream. And, it may have been all for naught. I'll pause while you go and cut yourself a big hunk of cheese, which you 100 percent deserve. In the review, Dr. Balfour-Lynn said that if there is any kind of link link between milk and mucus secretion, it happens in the colon and not the respiratory tract. That being said, even though milk and other dairy products might not actually produce more mucus, it can feel otherwise.

"Milk is an emulsion (defined as a suspension of droplets of one liquid in another) of fat in water, and emulsions mix with saliva," he explained in the review. "This could well affect the sensory perception of milk mixed with saliva, both in terms of its thickness coating the mouth and the after feel — when small amounts of emulsions remain in the mouth after swallowing. This may explain why so many people think there is more mucus produced when in fact it is the aggregates of milk emulsion that they aware of lingering in their mouth and throat."

So, while the feeling is real, you don't actually have more mucus after eating dairy, according to Dr. Balfour-Lynn, which means that dairy might not aggravate asthma, cystic fibrosis, or upper respiratory infections. While dairy doesn't make you produce more mucus, it can make your mucus feel thicker, which is why a lot of people avoid it before public speaking. What's more, if you do have a respiratory illness, and you feel worse when you drink milk, Dr. Balfour-Lynn noted that some patients who drank full-fat milk actually did experience lowered pulmonary diffusing capacity — the transfer of gas from air in the lung, to the red blood cells in lung blood vessels. However, ice cream of a similar fat content had no effect. So, avoid the high-fat milk and turn to ice cream instead.

Dr. Balfour-Lynn said that withholding dairy products from children with respiratory problems can actually do more harm than good in the long run. "One study of 50 children who avoided milk showed they were shorter and had reduced bone mineral density compared with 200 milk-drinking children, and only 12 percent were taking calcium supplements. Furthermore, in those avoiding milk, childhood fractures are more common than in the general population."

There are plenty of reasons to avoid dairy if that's your personal preference, but increased mucus production isn't one of them. "While certainly the texture of milk can make some people feel their mucus and saliva is thicker and harder to swallow, there is no evidence (and indeed evidence to the contrary) that milk leads to excessive mucus secretion," Dr. Balfour-Lynn concluded. If you've been living a life of FOMO because you've been told since you were a child that milk, ice cream, and cheese will increase your mucus production, that myth has been debunked. If you want to see what you've been missing out on, try introducing dairy slowly and see how you feel. I recommend starting with pizza.