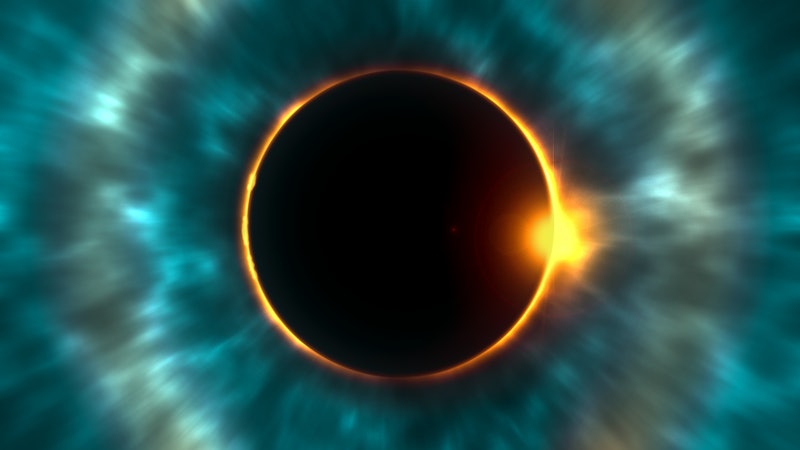 You may have heard that werewolves appear during full moons, or that more people tend to get injured or arrested. In fact, the term "lunacy" is actually derived from the word "lunar," which explains a lot. But what about a solar or lunar eclipse? Personally, I've wondered how an eclipse affects my sign, and I'm sure you have too. With so much written about the moon and the planets, we don't often talk about how an eclipse affects our astrological charts.

The next lunar eclipse is Aug. 7, while the next total solar eclipse is Aug. 21, 2017. Astrologers report that a lunar eclipse gives you insight into your shadow self, and a solar eclipse can cause you to shift your perspective, whether you want to or not. "Each eclipse in one family of signs will advance the discussion that the eclipse first brings up to a higher, more sophisticated level, and keep doing so, as each eclipse of that family arises until the matter is resolved," Astrologer Susan Miller explained on Astrology Zone.

"By then, you have evolved too. It is as if the universe knows that we can’t possibly process all the information and massive change it needs us to do at once, so each eclipse will bring another development, related in theme to the ones that came before, until the matter is finished over an 18- or 24-month period."

So in addition to retrograde planets, eclipses can play a pretty significant role in your cosmic journey.

The Quick And Dirty On Eclipses

There is a lot to say about eclipses, so I'm going to give you the headlines about solar and lunar eclipses and then break it down into more detail. A solar eclipse occurs when the moon is between the Sun and Earth, thus cutting off the Sun's light.

"This is what we typically think of when we use the word 'eclipse,' with the moon covering the Sun," Miller explained on Astrology Zone. "A lunar eclipse occurs when the earth stands between the Moon and the Sun, cutting off the light of the Sun from the Moon. The moon has no light of her own, as she simply reflects the light of the Sun. Here the moon basically disappears. A lunar eclipse is always a full moon and usually marks endings or culmination points."

So yes, it's going to affect you. The question now is how much.

How The Lunar Eclipse Will Affect You

Unexpected events can occur seven to ten days before a lunar eclipse, according to Astrologer Lynn Koiner. Oh goody!

The next lunar eclipse is Aug. 7, 2017 at 15 degrees and 25 minutes of Aquarius (opposite the Sun in Leo), according to the website Cafe Astrology. People born with personal planets and points at approximately 10 to 25 degrees of the fixed signs (Taurus, Leo, Scorpio, and Aquarius) will be most significantly affected.

You likely need that broken down. Fixed signs seek to maintain things so they stay the same. "Imagine a house. Every day it gets untidy and dirty," astrology website Trans4Mind explained. "In order to keep it in its 'normal' state, it must be changed — cleaned, tidied, etc. — so it remains the same. A body needs to be regularly fed and watered if it is to maintain its state of being alive. There appears to be no change because there is a lot of change directed to maintain a state, such as a clean house and a living body."

If this is you, things might get a bit, err, intense when you confront that shadow self.

"We all want to think of ourselves as good, kind people, but c’mon — we’re also human! What we discover about ourselves and others during lunar eclipses can be tough to swallow, even shocking," the Astrotwins wrote on their website. "Still, this gives us the opportunity to embrace our wholeness, and see where we have room to grow in new directions."

"Owning the fact that we have emotions like fear, anger, jealousy, and rage is the way to get a handle on them. Trying to pretend we’re Polly Pure or Sam Straightlaced? That’s when our feelings creep up and overwhelm us. If we’re willing to accept the good along with the bad, lunar eclipses can be magical moments of discovery."

Additionally, Miller explained on Astrology Zone that lunar eclipses tend to be more emotional because they convey a finality. "They often make us aware of the passage of time, and make us sentimental. ... Memories and dreams come up to the surface, and sometimes we feel sentimental."

How The Solar Eclipse Will Affect You

Koiner reported that a solar eclipse can affect you three to six months before it occurs, and for up to one year afterward. Oy with the poodles already. While shorter than Miller's 18-24-month prediction, that is still a long, long time.

The coming solar eclipse is the first one visible in North America since 1979. It occurs Aug. 21, 2017 at 28 degrees and 53 minutes of Leo. The eclipse will affect people born with personal planets and points at approximately 24 to 30 degrees of the fixed signs (Taurus, Leo, Scorpio, and Aquarius), and approximately zero to four degrees of the mutable signs (Gemini, Virgo, Sagittarius, and Pisces) most significantly, according to Cafe Astrology.

Pretty much the opposite of fixed signs, mutable signs want to change things into something else. "The emphasis is on adaptability in the sense that while the fixed signs resist change, the mutable signs accept it," Trans4Mind wrote. "The mutable signs end a cycle and lead on to the beginning of the new quadruplicity."

During solar eclipses, because the Moon is directly between the Earth and Sun, you might see things you might otherwise ignore.

"We have a finite focus as human beings, and it’s natural to concentrate on what’s in front of us. At times, this can limit our perspectives on the world, and even cause us to miss out on opportunities," the Astrotwins reported. "Solar eclipses might snatch away the familiar temporarily, forcing us to consider options we would never otherwise explore... Major growth can happen during these cosmic power outages. This is when we should leap into new (and generally improved) terrain, even if we feel forced there by circumstance."

If everything I just told you sounds like a bunch of gibberish, consider doing your astrological birth chart to see how it applies to you. And if you're feeling all weird and swirly and you're in the most-affected column, there's nothing wrong with you. For once, you can actually really and truly blame it on the stars.