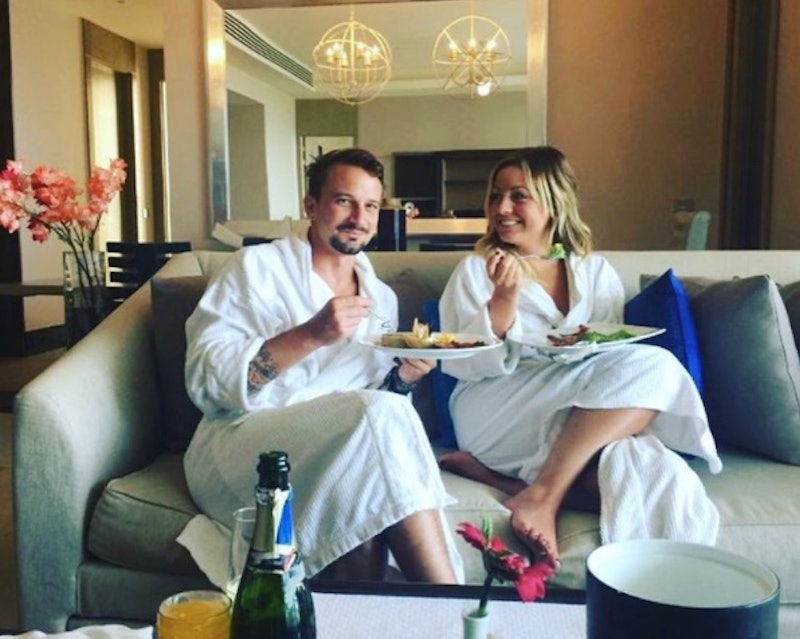 Over the course of Nick Viall's season of The Bachelor, Bachelor in Paradise couple Carly Waddell and Evan Bass will contribute weekly articles to Bustle about their friend's journey to find love. Read their take on Corinne's actions and more below.

Evan and I were apart while watching this episode, so it was fun to see the different things we picked up on (via Twitter and text). One thing that we agree on is that we would like to extend a wedding invitation to Corinne. ;) Evan will go more in depth about how Corinne is being edited on The Bachelor (and how much of her actions are for real), but first, let me give you my lightning recap of Episode 3, and what stood out most to me.

Let's talk a little more about Corinne. Like most controversial characters on The Bachelor, she is accumulating mixed reviews from fans. But the women in the house are not mixed at all. They are turning on her by divulging things to Nick like "She has a nanny," and the even more scandalous charge "She doesn't even know how to clean a spoon." On The Bachelorette, by the time the third episode was filming, Chad already had a crew dedicated to following him around the house. There was a camera that was actually labeled "Chad." So it's safe to assume that Corinne had similar attention while filming, because literally almost every thing she says and does is interesting... even sleeping.

Typically, the "villain" of the season doesn't make it very far. By Episode 4-5, the all-out crazy drama starts dying down because real feelings are forming and the lead starts draining the swamp of TV-ready shenanigans. It's a tried-and-true format: The drama hooks us in to the show, and we end up sticking around for the love story. (INSERT PLUG FOR MYSELF AND CARLY HERE.) A notable exception to the so-called villain staying longer than expected is, well, Nick. So it's going to be quite interesting to see if Corinne gets cut swiftly after what appears to be an impending contestant mutiny, or if she sticks around because Nick wants more bouncy house time. It seems like Nick is really under her spell. (I couldn't think of another bouncy house pun.)

While America, and sometimes the stars themselves — I see you, Josh Murray — defend villains of Bachelor Land by blaming editing, you can't edit stuff that never happened.

Editing tricks are utilized more to bring humor to a situation or to create suspense about future episodes, but rarely will they alter the plot. The truth is that in the limited two hours of each episode, it's extremely difficult to show the depth and complexity of any one person... even the lead. So The Bachelor shows the most prominent stuff. Right now, Corinne is dominating the screen time at the expense of the other women because she is the most interesting story. (I can't wait to see how Taylor, the mental health counselor, deals with all of this.) And let's face it, it's the eccentricities of the contestants that make it fun to watch. Weird is one big reason why we tune in. My favorite part of watching is the small quirky moments: Alexis the Dolphin-Shark gets a rose and bursts out, "Move, b*tches" as she comes through, or Corinne's can of whipped cream that has the label partially covered because REDDI-WIP DID NOT PAY FOR PRODUCT PLACEMENT.

I don't want to sit here and defend Corinne all day, but she's smart and clearly knows there's a TV show to be made. There are no editing tricks needed to show her asleep at the rose ceremony... except maybe the snoring. Still, the other women have every right to be upset. Most of them have a completely different moral code than Corinne when it comes to approaching their time with Nick and their time on the show. At this stage, jealousies are starting to creep in, and it feels very strange to watch the man you're dating off gallivanting in a hot tub with another woman. According to previews (again, potentially misleading) Corinne morphs from overtly sexual towards Nick to combative with the other women. That never ends well.

But, ultimately for Corinne, the show isn't editing her any one way. It's simply showing the most eye-catching and aggressive sexual sides of her interactions. Because it happened. And it's fascinating. And we are left to wonder, "Is she for real?" But what we're seeing is all real — albeit only one side of her hopefully much deeper persona. Carly and I hope that we get to experience her other equally important personality traits at some point — even we have to wait until her inevitable Bachelor in Paradise appearance for a deeper look.