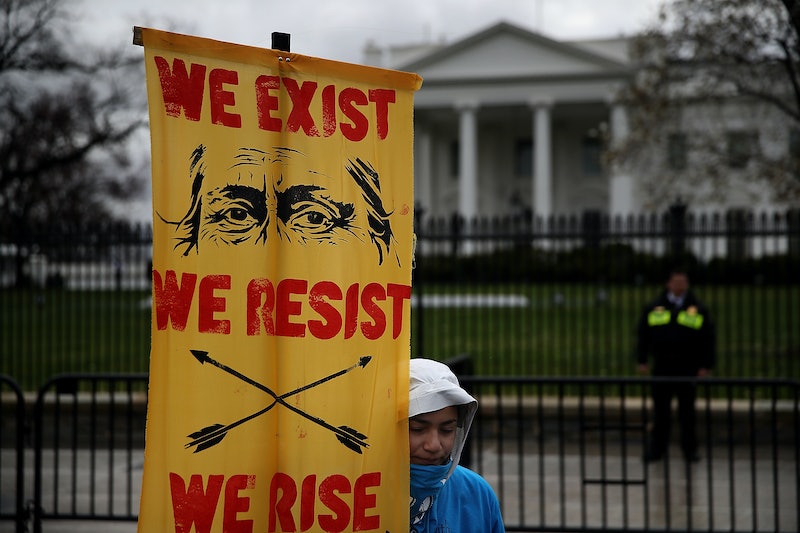 When you were a kid you may have been taught the rhyme "Christopher Columbus sailed the ocean blue in 1492," and perhaps you didn't think much else about why as a grown-ass woman you might get this day off from work. But, does everybody have Columbus Day off from work? The answer is no, which is another reason to question the false narrative of this controversial holiday that claims to celebrate working-class Italian-Americans who historically identified with Columbus, an Italian who has been credited with discovering America.

While Columbus Day was designated a federal holiday in the 1930s, which means that federal and bank employees get the day off, Columbus Day is not legally required to be observed in every state. "Only 23 states gave their employees Columbus Day as a paid holiday in 2015, according to the Council of States Governments’ Book of the States," Metro US reports. "This does not include the District of Columbia and Puerto Rico, which also give the day as a paid holiday. That means you’ll need to check to see if your local schools or post offices are closed for the day."

If it is not a public holiday in your state, it's actually up to your employer about whether or not to give you the day off. And, while you might be peeved if you have to work Oct. 9, if you remember what this day off actually means you might feel just fine working on Columbus Day. I know I do.

“Columbus Day is not just a holiday, it represents the violent history of colonization in the Western hemisphere,” Leo Killsback, a professor of American Indian Studies at Arizona State University, told History.com.

According to the Library of Congress, racialist theories circulated in the press about Italian immigrants in the 19th century, "advancing pseudo scientific theories that alleged that 'Mediterranean' types were inherently inferior to people of northern European heritage. Drawings and songs caricaturing the new immigrants as childlike, criminal, or subhuman became sadly commonplace. One 1891 cartoon claimed that 'If immigration was properly restricted, you would never be troubled with anarchism, socialism, the Mafia, and such kindred evils!'

Hmm, does that sound familiar? Like someone with an over-active Twitter account? In order to establish themselves in society, Italian-Americans turned to the legacy of Columbus and fought for a day to honor an Italian who had been credited with discovering America. I know from my family's personal history how hard Italian-Americans fought for a place in American society; however in 2017, this allegiance to Columbus is one that I would like to separate from.

Why? The celebration of Columbus Day erases the truth about Christopher Columbus from most people's consciousness. While many cities are making a move toward replacing Columbus Day with Indigenous Peoples’ Day, a new survey by Marist Poll found that 76 percent of Americans asked still support Columbus Day, citing that Columbus should be judged in the context of the morals of the 1400s, not those of 21st century.

Personally, I think we should learn from the atrocities of the past instead of condoning them. And, as an Italian-American, I fully support moving forward with Indigenous Peoples’ Day because the only way we keep from repeating our mistakes is to acknowledge them. Celebrating Columbus Day with time off work to go shopping and have parades in honor of such a shameful history is the exact opposite of learning from our mistakes.

While the holiday was originally initiated for a group of struggling immigrants to gain recognition and acceptance, aligning with one of the most notorious European explorers in history is not something to be proud of. I am proud to come from a working class Italian-American family, and I also volunteered to work on Columbus Day because I don't agree with the celebration of an Italian who displaced an entire culture of people.

If you were counting on getting the day off, and you do in fact have to work, I'll be right there with you. Instead of having FOMO, think of working on Columbus Day as an act of resistance instead.