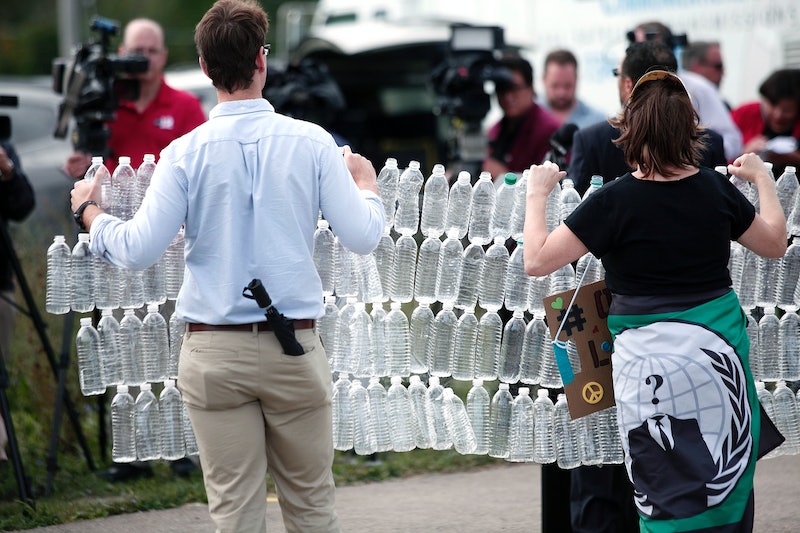 The water crisis in Flint, Michigan, has long fallen out of the news cycle, but that doesn't mean that it's over for city's residents. While the people living in Flint are still forced to use bottled water for everything that they do, it is painful to note that there are plentiful sources of the freshest water only miles down the road. Fresh and clean enough that only hours from Flint, Nestlé reportedly bottles water for the measly sum of $200 a year.

This crisis started all the way back in 2014, when the city switched its water supply from the Detroit Water and Sewerage Department to the Flint River. This was meant as a temporary solution while they prepared for bigger changes, but a temporary solution became a long-lasting problem when the untreated water from the Flint River started flowing through the city's old pipes, eventually corroding them and leaching hazardous materials into the drinking water. While city officials claimed that the water was perfectly safe to drink, Flint's residents immediately began complaining about its color and smell and how hard it was (water hardness is caused by compounds of calcium and magnesium, and some other metals).

The detection of dangerous bacteria in the water soon followed, and then in February 2015, the real bad news appeared — some of Flint's water contained enough lead to make it almost three times as poisonous as the level it takes to be considered hazardous waste.

Officials denied that there was a problem for several months, only issuing a lead advisory after several teams had released test results pointing to a higher level of lead in the water. Lead poisoning has serious consequences, particularly for children, including possible behavioral disorders, cognitive difficulties, and hearing problems for the rest of their lives. According to the NHS, no amount of lead in a child's bloodstream is safe — and yet most of the city of Flint was being exposed to it because of the Flint River water running through those old pipes.

Once the man-made public health crisis was revealed, Michigan Gov. Rick Snyder declared a state of emergency in Flint in January 2016, and the National Guard came to Flint to distribute bottled water to the people who could no longer trust their drinking water. Work eventually began to replace Flint's heavily damaged pipes, but it's simply not going fast enough for the people in the city — and now that the outrage is passed and the news crews aren't there anymore, the rest of the country has largely forgotten about the affair entirely.

The Guardian's reporting on Nestlé's bottling operations only hours from Flint really only adds insult to injury for the people of Flint, who have already suffered for years over an issue that most of the country never thinks twice about. Not only do they pay an exceedingly high rate for water in Flint, but it's nearly unusable. They can't drink it, of course, but they also can't cook food in it, can't shower in it, and can't even put it in their irons. Yet at the same time, Nestlé reportedly pays $200 a year to pump 100,000 times as much water as the average person in Michigan uses in a year. They make a great profit off of it, too, selling the bottles of about $1 each. Enough of a profit, apparently, that they're not applying to pump even more water out of the aquifer under the small town of Evart, Michigan — without paying any more money.

“It’s almost like a civics class for us Flint folks,” Flint resident Gina Luster told The Guardian. “You shouldn’t be able to profit off of water — it’s free. It came out of the ground.”

“With the money they make, they could come and fix Flint — and I mean the water plants and our pipes,” Luster added, nailing the core of this issue. Flint was recently found to be the nation's poorest city — and yet a huge food and drink corporation is currently profiting off of their most precious resource, almost in spitting distance of the people who are still suffering.

Flint residents need clean water running into their homes, because this city in America is currently living like it's in a developing country without a safe water supply. Does the world need more bottled water? The Guardian reports that Nestlé claims to maintain sustainable water practices, but plastic water bottles are creating a huge environmental problem. If things happen predictably, Nestlé will be granted their new permit well before Flint's water supply is fixed. In a perfect world, perhaps they could at least donate some of those bottles of water to Flint — but Flint's residents probably aren't expecting it.