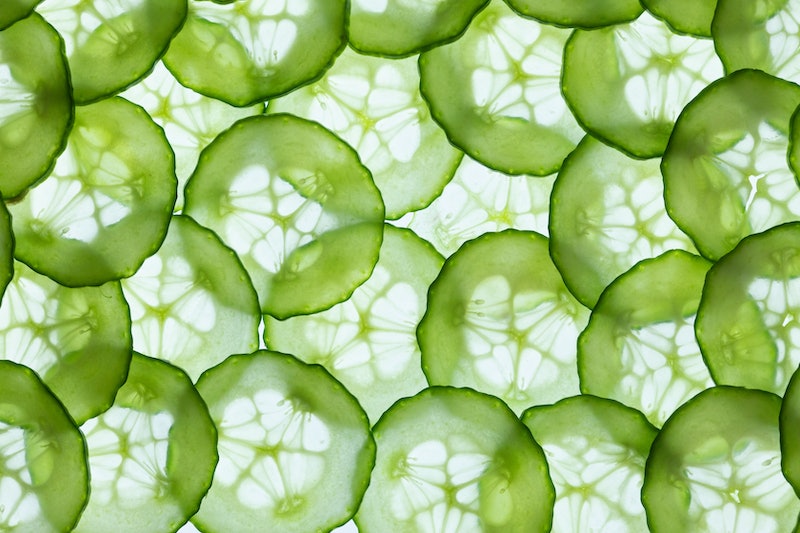 With anxieties about individual impact on climate change on the upswing, more and more people are opting to up the ratio of plants to meat in their diet, or even going vegan entirely. Going vegan, and eating an entirely plant-based diet, can be a good move for your health and the planet, science says — but the jury is still out on how going vegan affects your brain.

It's been long established that nutrition can impact your brain. Research has shown that omega-3s in fatty fish, flavonoids in fruits, green vegetables, and nuts can all contribute to a healthier brain. When it comes to going completely vegan, though, there's not a ton evidence yet to determine if it's helpful for the brain across the board.

"It's essential that we learn more about, and adopt, brain-healthy diets," Dr. Scott Kaiser, M.D., a physician at Providence Saint John's Health Center, tells Bustle. It's not clear, however, whether veganism is one of them. "According to some observational data, lifelong vegetarians and vegans actually have a lower risk of developing dementia," he says.

There are some issues with this sort of evidence: Is their reduced risk directly linked to the subjects' diet, or is it caused by other things, like exercise, avoiding other food groups, or not smoking? There's no conclusive evidence right now supporting the idea that eating plant-based foods prevents cognitive decline. Some experts even believe that veganism can actually raise your risk of illnesses like Alzheimer's because you're not getting the crucial fats you need.

A look at current studies explains more. A review of studies around veganism and human health published in Translational Psychiatry in 2019 found that, while there's evidence for veganism's other positive impacts on health, research about its effects on brain health is "scarce and rather inconclusive." The researchers behind the review noted that while the gut-brain axis, which links the digestive system with mood and brain health, might be affected by a vegan diet, they don't know exactly how. There's also not a lot of evidence to show how veganism might affect disorders of the central nervous system like fibromyalgia, or cognitive performance in general.

Evelyn Medawar, a doctoral researcher at the Max Planck Institute for Human Cognitive and Brain Sciences who was lead author of the 2019 review, says there weren't any randomized trials to support this link. "Our review could not find randomized control trials on brain structure or function with regard to plant-based diets," she says. "However, we found some inconclusive evidence for mental health-related associations with plant-based diets." One large study, for example, found that vegetarians had more depressive symptoms than non-vegetarians, but another showed that vegan diets helped with mood disturbances. Those effects could be mediated by other factors, though, like reduced inflammation or improved gut diversity — so it's not clear if or how veganism causes these effects.

Certain foods can indeed be helpful to brain health. "Abundant evidence points to the positive brain effects of plant foods rich in polyphenols, anti-inflammatory dietary patterns, and plant-based diets," Kaiser tells Bustle. Plant-based diets tend to have a lot of foods laden with antioxidants, polyphenols, phytochemicals, and unsaturated fatty acids, which can help brain cells grow and flourish. In tests on animals, Kaiser says, these compounds enhance the growth, connection, and survival of brain cells. A study published in PLOS One in 2010 found that vegetarians showed more brain activity related to self-control, empathy, and interoception, or awareness of their own bodies, than omnivorous people, but that could be attributed to different attitudes to life or other factors, not directly to their food.

Not all vegan diets are created equal. "If all you ate was pure sugar, that would technically be considered vegan but could be extremely toxic to the brain," Kaiser says. Vegans also need to be careful to get enough nutrients from their food, as deficiencies in important vitamins and minerals could affect brain health. Veganism can lead to deficiencies in B12 and choline, both of which are necessary for the brain's production of neurotransmitters; choline tends to be found in animal products. The brain also needs a good range of healthy fats and proteins to function, so vegan diets need to contain plenty of both to help brain health.

If we're going to understand the relationship between vegan diets and the brain, Medawar tells Bustle, there need to be long-term studies that look at plant-based diets in more detail, with specific studies of behavior and particular compounds in foods. "More research is needed in nutrition science, neuroscience, endocrinology, and psychology — ideally combining experts from all fields," she says. For the moment, though, eating for brain health means munching a lot of nutrient-rich foods, Kaiser notes. "Vegan or not, there are many foods we can enjoy, and others we should avoid, to give our brains the best chance of remaining healthy, happy, and sharp for years to come,” he says.

More like this
9 Balance Training Exercises That'll Improve Your Mind-Body Connection
By Carolyn Steber
6 Unexpected Causes Of Post-Workout Fatigue
By Carolyn Steber
I Visited Remedy Place, The Social Club Transforming The Wellness Industry
By Rachel Lapidos
The 8 Best Pilates Exercises For Lower Back Pain
By Carolyn Steber
Get Even More From Bustle — Sign Up For The Newsletter