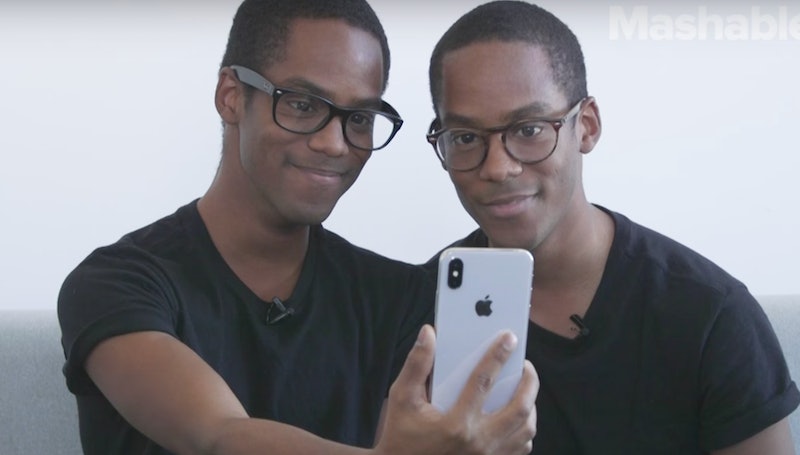 Everyone's talking about the iPhone X, and for one reason in particular: its Face ID. This is Apple's attempt at conquering biometric security, and it could be either a huge success or a giant letdown. To see just how accurately the iPhone X facial recognition works, two sets of identical twins put it to the ultimate test: trying to tell them apart.

Right now, you're likely unlocking your phone with a passcode or using your fingerprint; but Apple wants to take things to the next level. Face ID works by first registering your face as you do rather funny-looking head rolls in front of the camera, then storing this information. After this set-up, to use the feature, you need only look down at your phone, and it unlocks — indicated by the little padlock that opens up on the screen. Then, swipe up, and you're in.

In the video posted by Mashable, two pairs of identical twin bothers put the iPhone X's Face ID to good use. One brother took a turn letting it scan his face, before passing it off to his twin — who then tried to use his own face to unlock the phone. To spice things up a little more, one brother even removed his glasses before trying to "break into" his brother's device. Did it work? Watch below to find out.

Fail. The iPhone knows a lot of things. It knows your fingerprint. It knows your friends and family. But if you have a look-alike relative, it might not be able to tell you apart.

It's not too comforting, but there are important details to note here, because it's not quite as simple as, "Face ID can't tell twins apart, so it must suck." First, let's back up to Touch ID, which uses your fingerprint to unlock your phone. We already know this isn't foolproof. Touch ID works by taking many (very) small photos of your prints. This means, theoretically, someone could fake your fingerprints — but the odds are one in 50,000. Looking at Face ID, however, that number skyrockets to one in a million. Apple has been open about how your odds might not be as good if you have a twin or another relative who looks a lot like you. (On the same note, hopefully you don't have to worry about these specific people snooping through your phone, reading your texts, and checking out your naughty selfies.)

As for the rest of us who don't have twins or doppelgangers... Alex Cranz with Gizmodo tested out Face ID and confirmed what a lot of us have probably already suspected: most of the time, Face ID works perfectly.

In fact, as long as you don't give it a profile view (which it can't read), Face ID usually works in less than a second.

You simply tilt it toward your face and swipe. It even works in the pitch black. Best yet, the technology gets smarter as you use it. In other words, over time, it will know it's you even if you've grown a beard, are wearing your glasses (including sunglasses!), are making a funny face, and even after you've removed or put on make-up.

Joanna Stern of the Wall Street Journal also tried to trip up the iPhone X, similar to Mashable. Most of the time, the phone knew right from wrong: she even used photos of herself to try to trick it — taping a cutout to her own face, and holding up a picture of herself on her iPhone 7. Even a silicone mask of her own face didn't cut it. While she had a pair of twins try to (unsuccessfully) unlock the iPhone for each other, triplets were able to pull it off.

Bottom line: you can expect Face ID to be easy to use, fast, and secure. And unless you have a twin named Dr. Evil, you probably don't need to worry.